A few days ago, Richard Smoley (author of FORBIDDEN FAITH: THE SECRET HISTORY OF GNOSTICISM, SUPERNATURAL: WRITINGS ON AN UNKNOWN HISTORY, HOW GOD BECAME GOD, and many other excellent books) offered up the following endorsement for OPERATION MINDFUCK:


"It's practically a guide to your character to discover whether you find this expose of possibly the stupidest political movement in human history funny, alarming, or infuriating.... Highly recommended."

Richard Smoley, by the way, is also the editor of QUEST: JOURNAL OF THE THEOSOPHICAL SOCIETY IN AMERICA.

You can visit Smoley's personal blog by clicking HERE.
Posted by Robert Guffey at 6:22 PM No comments: 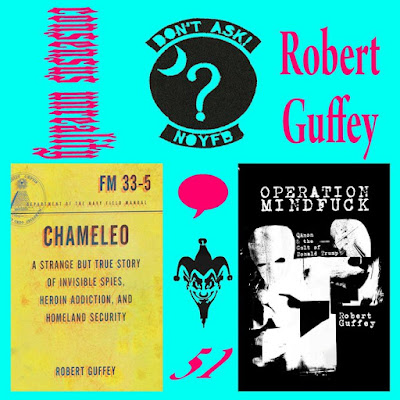 The latest episode of the CONSENSUS UNREALITY podcast features a two-hour-plus interview with Yours Truly. The first half focuses on my 2015 book, CHAMELEO, while the second half focuses on my latest book, OPERATION MINDFUCK: QANON & THE CULT OF DONALD TRUMP (available for purchase right now)! 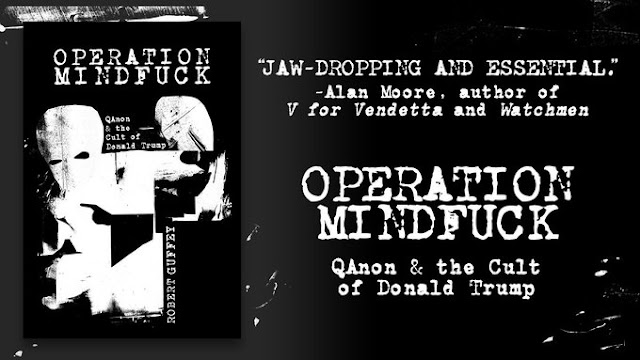 Posted by Robert Guffey at 10:42 PM No comments:

Surveillance and Harassment in Uvalde

The organized surveillance and harassment programs I wrote about in CHAMELEO (OR Books, 2015) are becoming so overt that even mainstream newspapers like THE WASHINGTON POST and THE DAILY MAIL are beginning to write about the phenomenon. Inevitably, the reporters don't seem to be aware that these incidents are part of a much larger pattern. Or, if they are aware of it, they aren't reporting on that fact... not yet at least.

Journalists had been threatened with arrest for getting too close to the mourners, so Houston Chronicle reporter Julian Gill stayed in the designated media area when he reported on funerals the week after the massacre at Robb Elementary School.

Nevertheless, a phalanx of uniformed bikers confronted Gill outside the cemetery gates. They called themselves “Guardians of the Children” and claimed to be working with police officers who stood watch.

But the bikers followed and harassed journalists anyway, Gill wrote in the Chronicle. When he accidentally bumped into a Guardian who claimed to be a paramedic, the bikers accused him of assault and battery. “As a public servant, that’s kind of a felony,” the biker-paramedic said in the video.

A month after 19 children and two educators were killed at Robb Elementary School, a picture is emerging of a disastrous police response, in which officers from several law enforcement agencies waited for an hour outside an unlocked classroom where children were trapped with the attacker. But journalists who have flocked to Uvalde, Tex., from across the country to tell that story have faced near-constant interference, intimidation and stonewalling from some of the same authorities — and not only bikers claiming to have police sanction.

Journalists have been threatened with arrest for “trespassing” outside public buildings. They have been barred from public meetings and refused basic information about what police did during the May 24 attack. After several early, error-filled news conferences, officials have routinely turned down interview requests and refused to hold news briefings. The situation has been made even more fraught by the spider’s web of local and state agencies involved in responding to and investigating the shooting, some of which now blame each other for the chaos.

“Our reporters have covered [the 2017 massacre in] Sutherland Springs, the Fort Hood shooting, and some are very experienced, having been embedded with military in Afghanistan, covered revolutions in Latin American, and none of them could remember an experience like this,” said Marc Duvoisin, editor in chief of the San Antonio Express-News. “The interference was so intense and without an identifiable public safety purpose.” [...]

It is not unusual for public information to be lacking in the aftermath of a catastrophe, or for locals to be rankled when hordes of reporters converge on a small town. But the pattern of miscommunication, stonewalling and intimidation in Uvalde has surprised even journalists with decades of experience, and led some to suspect it is intentional.

Here's an excerpt from Chris Matthews' 6-27-22 DAILY MAIL article entitled "Mom Who Was Cuffed by Cops Before She Managed to Jump the Fence and Save Her Son and His Friends from Uvalde Gunman Claims She Is Now Being Harassed by Officers Who 'Park Outside Her Home and Flicker Their Headlights'":

A mom who was cuffed by cops at Uvalde before she was able to save her two sons from the gunman at Robb Elementary has claimed officers have been harassing her since the massacre.

The Texas elementary school shooting on May 24 left 19 children and two teachers dead.

On the day of the shooting, Angeli Rose Gomez rushed to the school and saved her kids even though officers tried to stop her.

A total of 77 minutes elapsed between police arriving at the scene and their confrontation with the gunman.

In that time, Angeli Rose Gomez rushed to the school and was cuffed outside it as she tried to rescue her children.

She convinced a Uvalde officer she knew to ask a US Marshal to let her out of the cuffs.

As soon as she was free she ran to the school, saving her kids, all while police were still allowing shooter Salvador Rolando Ramos, 18, to roam with an assault rifle.

Uvalde School District Police Chief Pete Arredondo in particular faces stinging criticism over his response to the mass shooting and was put on administrative leave after last week.

Since the shooting, Gomez said she has faced 'harassment' from officers.

While the family was exercising one evening, a cop had 'parked at the corner, flickering us with his headlights', she told Fox 29.

She's separated from her children because of the alleged harassment and is considering filing a lawsuit in the wake of the shooting.

Her lawyer, Mark Di Carlo, a criminal defense lawyer from Corpus Christi who is representing around 15 Uvalde parents, said because Arredondo 'wasn't fired immediately' there was an 'indication of corruption or wrong-doing.'

Gomez also previously slammed officers for warning her with a probation violation for obstruction of justice after she spoke to the media.

Gomez said she was called by an officer who warned she would be hit with legal trouble over a charge against her from over a decade ago.

She insisted she wouldn't be cowed and would continue sharing her story after the judge presiding her previous case said she would be fined.

Posted by Robert Guffey at 11:23 AM No comments:

Today is the official publication date of my latest book, OPERATION MINDFUCK: QANON & THE CULT OF DONALD TRUMP. Synchronistically, only a few days ago, Q decided to crawl out of the woodwork and start posting again after eighteen months of silence. It would be darkly amusing to think that Team QAnon elected to do this as a way of commemorating the pub date of OPERATION MINDFUCK... but of course the real reason is that these new Q posts are just desperate attempts at damage control following Cassidy Hutchinson's damning testimony at the January 6 hearings. The fact that Trump's people felt the need to resurrect Q in order to combat these hearings is telling indeed. To understand what truly fuels the fascist ideology behind QAnon, read OPERATION MINDFUCK: QANON & THE CULT OF DONALD TRUMP!!! 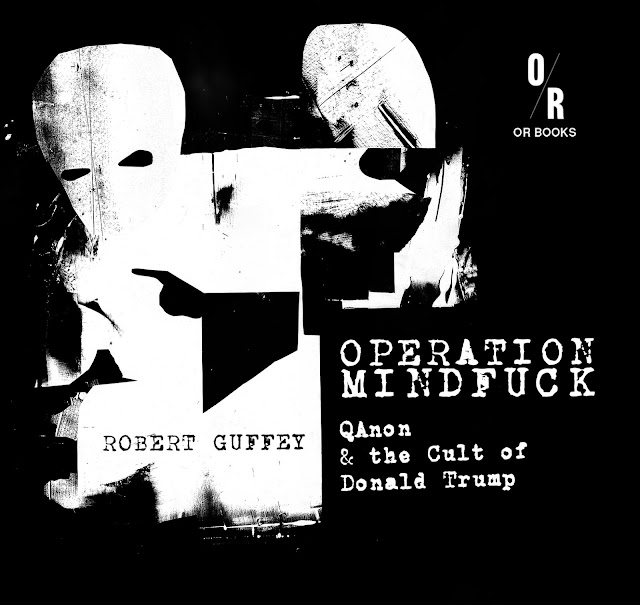 “Voltaire suggested that those who can make us believe absurdities can make us commit atrocities, and QAnon provided the practical demonstration. Robert Guffey’s razor-sharp postings illuminate how a collage of Shaver mysteries, Discordian prankster politics and recreational conspiracy theory played out as dissociative American fugue. Jaw-dropping and essential.”
—Alan Moore, author of V FOR VENDETTA and WATCHMEN

“One of the most difficult aspects of confronting QAnon conspiracism is finding the time and resolve to delve into its ever-expanding network of self-reinforcing connections and concepts. Robert Guffey does that work for you in OPERATION MINDFUCK, a codex to madness and a critical examination of how a massive fraction of our culture has imbibed a counter-reality. Guffey also explores underground sources lost on many mainstream historians, bringing us into an (occasionally ingenious) netherworld of outsider thought forms. Guffey is the Ernest Shackleton of paranoia—and one hopes his journey will result in a happier ending.”

“OPERATION MINDFUCK: QANON & THE CULT OF DONALD TRUMP by Robert Guffey tackles the conspiracy theories Q draws from, the history of the Q phenomenon, and the eventual attempts by mobs at least partially influenced by Q, and certainly influenced by Donald Trump, to overturn the 2020 Presidential election. The book is well-researched, with a full Bibliography of notes that reference and identify each quote from each source that Guffey cites. Guffey, additionally, has a long background studying conspiracy theories and their origins [...]. Guffey is not a lightweight.”

—Steve Henn, author of AND GOD SAID LET THERE BE EVOLUTION

“Whether QAnon is a religion, a cult, a joke, a political movement, or just an online game gone awry, Robert Guffey‘s OPERATION MINDFUCK: QANON & THE CULT OF DONALD TRUMP (OR Books, 2022) is his attempt to figure it all out. Guffey’s pedigree in this area is unmatched [...]. Throughout OPERATION MINDFUCK, Guffey follows Theodore Sturgeon’s advice he quoted in his book CHAMELEO (OR Books, 2015): 'Always ask the next question.'”

Posted by Robert Guffey at 12:13 AM No comments:

From THE WASHINGTON POST'S 7-4-22 editorial entitled "NASA Is Right to Examine UFOs":

The space agency announced last month that a team led by a respected astrophysicist will examine what the government now prefers to call UAPs, or unidentified aerial phenomena — and along the way, what was once dismissed as conspiracy theorizing has earned the more impressive description of “high-risk, high-impact” research. This move will not come as a surprise to those who have followed the Defense Department’s own evolution on the subject: Senior Pentagon officials in May testified in a historic congressional hearing about their own efforts to track sightings of mysterious flying objects. And the director of national intelligence issued a report last year documenting more than 140 of these perplexing events [...].

The pursuit will obviously prove worthwhile if NASA or anyone else discovers that aliens do indeed exist. But it will also be worthwhile if — and this is much more likely — researchers land on another explanation for UAPs, and even if they land on no explanation at all. As NASA associate administrator Thomas Zurbuchen said in his speech announcing the initiative: “We have the tools and team who can help us improve our understanding of the unknown. That’s the very definition of what science is.”

Posted by Robert Guffey at 10:22 PM No comments:

CLICK BELOW TO DECIPHER MY SPECIAL 4TH OF JULY MORSE CODE MESSAGE!!!! 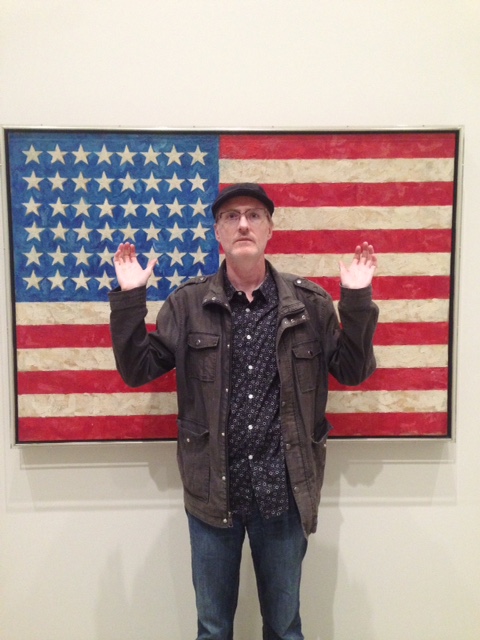 The Xaver 1000 is a futuristic gadget that can give intelligence units "an unprecedented situational awareness 3D visual picture," according to the company's website, and has the ability to detect "live objects (static or dynamic) behind walls and building obstacles."

That means tactical teams could soon get a highly detailed picture of what's going on behind a variety of obstructions, allowing them to prepare ahead of breaching urban environments [...].

The 36 pound device can also pack down significantly thanks to a foldable antenna, meaning it can easily be positioned in almost any environment.

Posted by Robert Guffey at 12:33 PM No comments: