Earlier today THE BELIEVER published a lengthy excerpt from CHAMELEO (most of Chapter 13, in fact) on their website. You can check it out by clicking right HERE.
Posted by Robert Guffey at 1:09 PM No comments:

CHAMELEO: ONE OF THE TOP 15 NONFICTION BOOKS OF THE YEAR!

Flavorwire has just named CHAMELEO one of the top 15 nonfiction books of 2015!  Note that I’m listed above Jon Krakauer and beneath Kim Gordon, a fairly accurate assessment to my mind.  To see the entire list, click HERE.

"Guffey’s Chameleo, a paranoiac nonfiction techno-thriller and the story of a friendship, is by many miles the weirdest and funniest book of 2015. It tells the story of an oft-recovering heroin addict named Dion Fuller who is believed by the Department of Homeland Security to have stolen a pair of night vision goggles from a military base. From there it becomes a sui generis exploration of conspiracy as a form of art."   — Jonathon Sturgeon, Flavorwire, 6-22-15
Posted by Robert Guffey at 6:40 PM No comments:

I wonder what Trevor James Constable (author of the classic 1958 UFO book THEY LIVE IN THE SKY!) would think of this 6-2-15 news.com report about "plasma tubes floating above Earth."  The first few paragraphs of the article, "Aussie Student Proves Existence of Plasma Tubes Floating Above Earth," read as follows:


"AN AUSTRALIAN scientist has discovered that giant, invisible, moving plasma tubes fill the skies above Earth.
"It’s a finding that was initially met with a considerable degree of scepticism within the field of astrophysics, but a University of Sydney undergraduate student Cleo Loi, 23, has proven that the phenomenon exists.
"By using a radio telescope in the West Australian outback to see space in 3D, Ms Loi has proven that the Earth’s atmosphere is embedded with these strangely shaped, tubular plasma structures. The complex, multilayered ducts are created by the atmosphere being ionised by sunlight."
First click HERE to read the entire news.com report, then click HERE to listen to an excerpt from a radio interview with Trevor James Constable in which the author discusses his unique theory about UFOs, which he first proposed way back in 1958, then expanded on years later in his 1975 book entitled THE COSMIC PULSE OF LIFE. 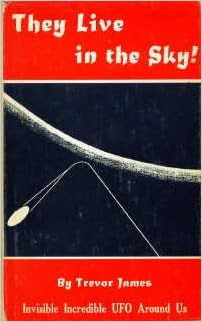 Posted by Robert Guffey at 9:44 PM No comments:

Quote of the Day

“These people are looking for criminals. You could be the most innocent person in the world, but if somebody programmed to see patterns of criminality looks at your data, they’re not going to find you – they’re going to find a criminal.”

The above quote comes from a 4-29-15 amnesty.org article entitled "7 Reasons Why 'I've Got Nothing to Hide' Is the Wrong Response to Mass Surveillance" by Ben Beaumont.  You can read Beaumont's entire article by clicking HERE.

A related Ben Beaumont article, entitled "7 Ways the World Has Changed Thanks to Edward Snowden" (posted on 6-4-15), can be found at amnesty.org right HERE.
Posted by Robert Guffey at 12:14 AM No comments:

We Apologize for the Inconvenience

My previously announced signing at Book Soup has been cancelled for reasons beyond my control.  If another CHAMELEO event crops up, I’ll definitely let you all know about it.  As Douglas Adams wrote in SO LONG, AND THANKS FOR ALL THE FISH, “We apologize for the inconvenience.”  In the meantime, feel free to salve your wounds (and mine) by purchasing several copies of CHAMELEO from OR Books.  You can find your way to OR Books by simply clicking HERE.

(Note:  As far as I know, invisible midgets had nothing to do with the cancellation of this event, but I suppose one must never rule out the possibility.) 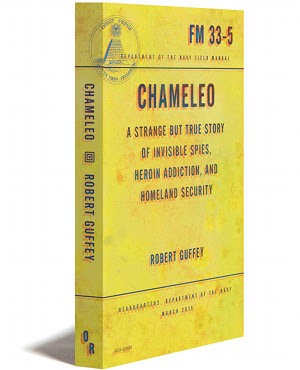