"As expected, the Amash amendment to curtail NSA surveillance, unconstitutionally permitted under the PATRIOT Act, failed to gain traction in the House of Representatives on Wednesday.

"Last minute efforts by the Obama administration, members of Congress, including the leaders of intelligence committees, and the military-intelligence complex to scuttle the amendment proved successful as the final vote came in with 205 for and 217 against.

"Debate in the House prior to the vote was particularly heated. Rep. Mike Rogers, a Michigan Republican and the chairman of the Permanent Select Committee on Intelligence, insulted fellow Michigan Republican Justin Amash, who introduced the amendment. Rogers said Amash was engaging in debate on the House floor for the sake of “Facebook likes.”

"The vote outcome revealed how important maintaining and growing the surveillance state is for the political class in Washington. Republicans and Democrats crossed the aisle to defeat the amendment."

Read the entire story by clicking HERE.
Posted by Robert Guffey at 11:33 AM No comments:

Joshua M. Dennis's Master's thesis, Standing on the Shoulders of Giants, was published in 2012 by the Naval Postgraduate School (U.S.) Center for Homeland Defense and Security.  Dennis's thesis bears the portentous sub-title "Where Do We Go from Here to Bring the Fire Service into the Domestic Intelligence Community?"  In his abstract, Dennis writes:

When read in conjunction with Radley Balko's 6-19-13 Huffington Post article entitled "Welcome to the Police Industrial Complex," an ominous picture begins to form regarding the little known connections between the intelligence community and local police and fire departments.  What follows is the first paragraph of Balko's article:


"Want to make money on the drug war? Start a company that builds military equipment, then sell that gear to local police departments. Thanks to the generation-long trend toward more militarized police forces, there's now massive and growing market for private companies to outfit your neighborhood cops with gear that's more appropriate for a battlefield."
In light of Balko's article warning about the increasingly militarized mindset of local police departments, Dennis's phrase "the future of fire service intelligence sharing" begins to take on a rather dystopian tone indeed.
To read Balko's entire article, click HERE.

Posted by Robert Guffey at 10:10 AM No comments:


"A Toronto man claims he was harassed for walking through thick brush in Durham region by a police officer who accused him of being a pot grower.
"Tim Marczenko denies the claim, saying he wasn’t growing dope, he was investigating sightings of Bigfoot.
“'[The officer] asked me, "What are you doing out here?" I told him I was investigating a Bigfoot report and he said, "Wow, you’re a terrible liar," ' said Mr. Marczenko. "I know it sounds crazy but I’m not lying about it," I said. He kept telling me I was lying about the situation.'
"The site was under police surveillance after nearby residents complained about groups of young men flocking to the forest armed with shovels in weeks past. Three men were later arrested after several marijuana plants were found deep in the woods. Their cover was to tell the locals they were searching for Bigfoot.
"Last August, Mr. Marczenko said he was on assignment for the Ontario Wildlife Field Research investigation into numerous reports of Bigfoot-sized tracks in the Township of Brockton."
To read the entire article, click HERE.

Posted by Robert Guffey at 10:44 AM No comments:

"The Museum Called Reality" and "The Covert Op Called Democracy"

Jon Rappoport's still on fire these days.  Here are links to two recent Rappoport posts, both of which are outstanding.  To read "The Covert Op Called Democracy" (7-19-13) simply click HERE.  To read "The Museum Called Reality" (7-9-13) click HERE.  The first piece is one of the most lucid and concise summations of our current political situation you could ever possibly come across, and in a perfect world the second piece would be included in the next Year's Best American Short Stories.  "The Museum Called Reality" reminds me of the very best of Manly P. Hall's illuminating metaphysical parables, such as "The Emerald Tablet," collected in Hall's 1925 short story collection SHADOW FORMS (a high compliment indeed!).
Posted by Robert Guffey at 10:32 AM No comments:

For those of you bored with San Diego Comic-Con, there's another gathering of eccentric obsessives occurring at this very moment.  It's called "Bohemian Grove," and you've still got a few days left to join the weird festivities.  For more info, click HERE.  (Limited Edition "Moloch the Owl" plush dolls available upon request.  Ask for "Boaz.")

Posted by Robert Guffey at 11:11 AM No comments:

I've just sold yet another new article to FORTEAN TIMES MAGAZINE.  It's called "Strange Tales of Homeland Security!" (4,300 words) and will be appearing--oddly enough--before the previous article I sold to them.  The previous article, "Attack of the Poisonous Mushroom Growth:  Horror Comics of the 1940s and '50s, Political Propaganda, and the Simple Art of Distraction" (5,200 words), is still scheduled to appear in the Fall.  According to Fortean Times editor, David Sutton, "Strange Tales of Homeland Security!" will be featured in the very next issue.

I also learned recently that my new short story, "Flames" (4,300 words), has been definitely scheduled for the September, 2013 issue of PLAN B MAGAZINE.  Watch for it!
Posted by Robert Guffey at 10:37 AM No comments:

"Rolling Stone journalist Michael Hastings’ body was cremated against his family’s wishes, destroying potential evidence that could have contradicted the explanation that he died as a result of an accident, according to San Diego 6 reporter Kimberly Dvorak.

"Hastings was killed in the early hours of June 18 in the Hancock Park neighborhood of Los Angeles when his Mercedes crashed into a tree at high speed and exploded into flames, sparking theories that the journalist, who was working on a major exposé of the CIA, could have been assassinated."

Read the entire article by clicking HERE.
Posted by Robert Guffey at 10:10 PM No comments:

The Path of Richard Matheson

Richard Matheson (1926-2013), author of such influential novels as I Am Legend (1954), The Shrinking Man (1956) and Hell House (1971), passed away recently--on Sunday, the 23rd of June--at the age of 87.  Though he wrote many classic novels, short stories, teleplays and screenplays in a wide range of genres (everything from westerns to war stories to comedies to biopics to mainstream melodramas), without a doubt he was best known for his supernatural short stories.  Many of these contemporary tall tales, in the form of the numerous haunting teleplays he wrote for such television shows as the original version of The Twilight Zone, have embedded themselves firmly in the collective consciousness of most Americans without many of them ever having heard the name "Richard Matheson."

His first published short story, entitled "Born of Man and Woman" (1950), though only a few pages long, contains more raw terror and intensity than any 500-page novel by either Stephen King or Dean R. Koontz (and King and Koontz would agree with that statement), and is a portentous omen of the types of stories Matheson would hone to perfection later in his six-decade-long career.  In fact, Matheson chose "Born of Man and Woman" as the title piece of his debut story collection, published by Chamberlain Press in 1954.

But the Matheson book that will be of the greatest interest to any dedicated cryptoscatologist is his 1993 metaphysical nonfiction book THE PATH, a curious condensation and reinterpretation of Harold W. Percival's classic but obscure Theosophical tome--over 1,000 pages long and the result of 34 years of research--entitled THINKING AND DESTINY (1946) which deals, in Percival's own words, "with the entirety of the universe beyond the range of human thought."  In The Path, Matheson attempts to simplify Percival's heady thoughts about the occult destiny of mankind into simple language that can be easily comprehended by the layman.

By the way, Percival also wrote a valuable book about Freemasonry entitled MASONRY AND ITS SYMBOLS (1952), which I would highly recommend for anyone interested in casting light on the hidden meanings of Masonry. 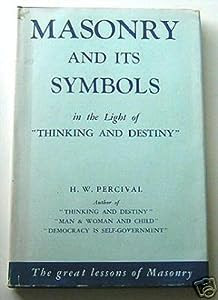 "Flames" and "Attack of the Poisonous Mushroom Growth!"

Within the past couple of weeks I've sold two new pieces, one a short story and the other an article.  The short story, entitled "Flames" (4,300 words), will be appearing soon in the second volume of PLAN B MAGAZINE, a mystery and crime anthology edited by Darusha Wehm.  The article, entitled "Attack of the Poisonous Mushroom Growth!:  Horror Comics of the 1940s and '50s, Political Propaganda, and the Simple Art of Distraction" (5,200 words), will be appearing soon in FORTEAN TIMES.  According to the editor, David Sutton, the article should be published sometime around late Summer/early Autumn.  As always, I'll keep you posted as the publication dates draw near....
Posted by Robert Guffey at 9:49 AM No comments: