SALON: "QAnon Followers Still Think Trump Will Be Inaugurated — on March 4 National Guard Will Be Ready"

SALON journalist Igor Derysh recently interviewed me about the current state of QAnon in our post-Trump era. You can read Derysh's complete article ("QAnon Followers Still Think Trump Will Be Inaugurated — on March 4 National Guard Will Be Ready") right HERE.

Nearly 5,000 National Guard troops are expected to stay in Washington for at least another three weeks amid concerns over potential violence from QAnon adherents, some of whom believe former President Donald Trump will be inaugurated on March 4.

"Some of these people have figured out that apparently 75 years ago, the president used to be inaugurated on March 4," Smith said. "Now why that's relevant, God knows. At any rate, now they are thinking maybe we should gather again and storm the Capitol on March 4 ... that is circulating online."

Pentagon official Robert Salesses said at the hearing that 4,900 National Guard troops will remain in D.C. through March 12 at the request of Capitol Police in response to "different missions" that the troops will support. He said there isn't a specific threat that the National Guard is tracking but the Pentagon will work with law enforcement agencies to evaluate any potential threats.

The Trump Organization appears to have taken notice of the chatter too. The Trump International Hotel in Washington has jacked up its room rates for March 3 and 4 by nearly $1,000, Forbes first reported. It was the only hotel in the nation's capital to increase rates for those days — and has not increased them on surrounding days. The hotel similarly raised its prices dramatically for Jan. 5 and 6, the dates around the deadly Capitol riot.

Posted by Robert Guffey at 1:00 AM No comments:

WIDOW OF THE AMPUTATION & OTHER WEIRD CRIMES Is Now Up for Pre-Order!

Through the miracle of synchronicity, I have two (count 'em, two!!!) new books scheduled to be published in the first week of April. On April 6th, my second novel (BELA LUGOSI'S DEAD) will be published by Crossroad Press. Only a few days earlier, on the first of April, a collection of novellas entitled WIDOW OF THE AMPUTATION & OTHER WEIRD CRIMES will be unleashed by Eraserhead Press.

WIDOW OF THE AMPUTATION & OTHER WEIRD CRIMES is a collection of four novellas that explore the madness of murder through the warped lenses of urban noir, science fiction, horror, and experimental fantasy.

In DECAY IN AMBER, a convicted rapist and murderer wakes up one morning to discover he is only six inches tall and floating down the middle of the L.A. River in a beer bottle. In ROCKET CITY MURDER, a police lieutenant has only twenty-four hours to solve a brutal triple-murder committed within the secretive confines of the bio warfare research lab known as Micropolis. In WIDOW OF THE AMPUTATION, the mythologies of various cultures collide as Charles Manson succeeds in busting out of Corcoran Penitentiary. And in YOU MIGHT AS WELL DIE, a crime noir writer is led into a clever cat-and-mouse game intended to frame him for a murder he himself unknowingly devised.

"Guffey is my kind of crazy. He understands that the universe is preposterous, life is improbable, and chaos rules: get used to it." -Pat Cadigan, author of MINDPLAYERS

"Robert Guffey's writing has impressed, entertained, and enlightened me pretty much since I first met him. My suggestion? If he wrote it, read it." - Jack Womack, author of RANDOM ACTS OF SENSELESS VIOLENCE

Directly below you'll see the stunning cover, as designed by the incomparable Matthew Revert....

You can pre-order the book by clicking right HERE! 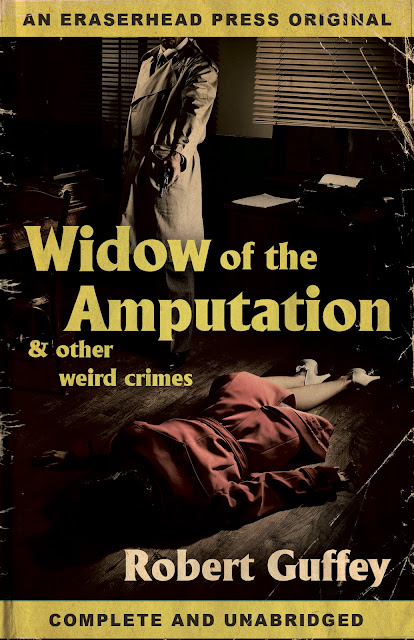 Posted by Robert Guffey at 9:33 PM No comments:

CHAMELEO ON WHERE DID THE ROAD GO?

This past Friday, on February 12, Seriah Azkath of WHERE DID THE ROAD GO? reposted his March 10, 2018 two-part interview with Yours Truly as a single episode that runs almost three hours.

During this interview, we cover my books UNTIL THE LAST DOG DIES, CHAMELEO, SPIES & SAUCERS, CRYPTOSCATOLOGY and related High Weirdness such as hordes of invisible predators attacking drug addicts in San Diego, sonic weapons, acoustic bullets, leapfrogging robots, machine-gun-toting ape-men in the wilds of Santee, vampire killings in the Philippines, dead nuns falling out of the sky, fairy abductions, the use of reanimated corpses as military weapons, roving invisible bubbles that sound like cuckoo clocks, and EARTH VS. THE FLYING SAUCERS. Enjoy, my friends!

You can hear the entire interview directly below....

Posted by Robert Guffey at 1:33 PM No comments:

"They're Coming to Take Me Away Ho-ho Hee-hee Ha-haaa!"

From Haven Orecchio-Egresitz and Kelsey Vlamis' 1-29-21 INSIDER article entitled "Lawyer Lin Wood Says He Will Refuse a Mental Health Test and Threatens the Georgia State Bar as It Opens An Inquiry Into His Conduct":

A far-right, pro-Trump attorney who is at risk of losing his license to practice law posted to the alternative messaging app Telegram on Friday, saying he will refuse to take a mental health assessment the Georgia State Bar has requested.

L. Lin Wood, an Atlanta-based defamation lawyer, rose to infamy last year because of his role in former President Donald Trump's unhinged attempt to overthrow the election, and representing the teenager who shot three Black Lives Matter demonstrators during unrest over the summer.

He has been banned from Twitter after repeatedly spreading disinformation and conspiracy theories.

The city of Detroit had also previously called for Wood, and other lawyers involved in the election scheme, to be disbarred in Michigan and other states where they are licensed.

The State Bar of Georgia Chief Operating Officer Sarah Coole confirmed in an email to Insider that an inquiry pertaining to Wood is ongoing under a rule that says mental illness could be grounds for disbarment. She said the investigation process is confidential and did not provide further comment.

In a Telegram post on Friday afternoon, Wood said he would refuse the exam if it was formally requested of him.

"I am of sound mind and I have not violated any rule of professional conduct," he wrote.

"They're Coming to Take Me Away" from LARD: THE LAST TEMPTATION OF REID (1990)