The headquarters of U.S. Forces Japan may also be home to supernatural activity, according to a couple who claim to help anyone dealing with paranormal disturbances to rid their homes of unwanted spirits.

Chaplain (Capt.) Lance Brown, of Yokota's 374th Wing Staff Agency, and his wife, Karen Brown, who is working on a master's in counseling, have been performing home cleanses, or anointings, for the past eight years in homes where "odd things occur."

Supernatural activity is reported so often at this base in western Tokyo that it inspired a Facebook group, Yokota Ghost Hunter Club. Its members post about paranormal phenomena they've experienced at their homes and workplaces.

Posted by Robert Guffey at 1:33 PM No comments:

The animated film Bigfoot Family has come under fire in Canada – but not because of its stilted dialogue or confusing plot.

Instead, a government-funded lobbying group has targeted the movie – a fantasy epic featuring a human family whose father is Bigfoot – on the grounds that it “peddles lies” about the oil and gas industry.

The Netflix film, panned by critics, centres on an energy company’s nefarious scheme to detonate a bomb in a pristine Alaska valley to flood it with crude oil.

Although the film is set in the US, the Canadian Energy Centre, funded by the province of Alberta, has launched a campaign against the movie, which it says “brainwashes” children with “anti-oil and gas propaganda”. 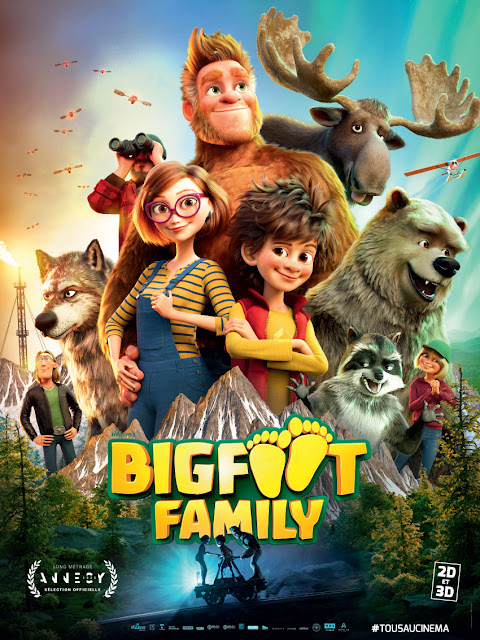 Posted by Robert Guffey at 4:00 PM No comments:

If we expect literature to fix social problems, we wrongly imagine it as a wrench that might twist the world into a more pleasing position. This is to misunderstand art, which challenges and expands our sense of the world, rather than simplifying it. Art forces us to see with complexity. In return, we must accept that no easy solution awaits. Profound writing is never just an answer.

2) From Brock Clarke's 3-17-21 LIT HUB article entitled "On the Case for Meanness in Fiction":

Young authors may be self-censoring because they worry they will be "trolled" or "cancelled", according to celebrated writer Sir Kazuo Ishiguro.

Sir Kazuo, who won the Nobel Prize in Literature in 2017, warned that a "climate of fear" was preventing some people from writing what they want.

He said they may be concerned that an "anonymous lynch mob will turn up online and make their lives a misery".

He told the BBC: "I very much fear for the younger generation of writers."

The 66-year-old said he was worried that less established authors were self-censoring by avoiding writing from certain viewpoints or including characters outside their immediate experiences.

"I think that is a dangerous state of affairs," added the acclaimed author, whose works include The Remains of the Day and Never Let Me Go.

Posted by Robert Guffey at 2:23 PM No comments:

Four alleged leaders of the Proud Boys have been indicted in connection with the Jan. 6 attack on the U.S. Capitol over allegedly conspiring, including in discussions on encrypted messaging apps, to obstruct the certification of President Biden's Electoral College victory.

The defendants are the latest with ties to the Proud Boys, a far-right extremist group, to face conspiracy charges over their alleged roles in the Jan. 6 storming of the Capitol by Trump supporters.

Posted by Robert Guffey at 5:00 PM No comments:

The Texas Department of Public Safety has ended the controversial practice of using hypnosis to investigate crimes.

A department spokesman said the hypnosis program ended in January 2021, more than forty years after its inception, because its officers are now relying on better investigative practices.

The decision comes less than a year after The Dallas Morning News published a two-part series, “The Memory Room,” which raised serious questions about the efficacy of using hypnosis on criminal cases. The News investigation found Texas built one of the most prolific programs for police hypnosis in the country, repeatedly doubling down on the practice despite scientific evidence that hypnosis can distort witness memories and lead to false convictions [...].

“The Memory Room,” published in April of last year, revealed that Texas officers continue to turn to the debunked technique, sending dozens of men and women to prison and some to their deaths. The Texas Rangers are among the most prolific hypnotists in the state, The News found, performing at least 1,700 hypnosis sessions since the 1980s.

Only hours after the mailman dropped off a large box overbrimming with copies of my latest novel, BELA LUGOSI'S DEAD, my publisher alerted me to the very first review of the novel in PUBLISHERS WEEKLY. You can read the complete PW review right HERE. 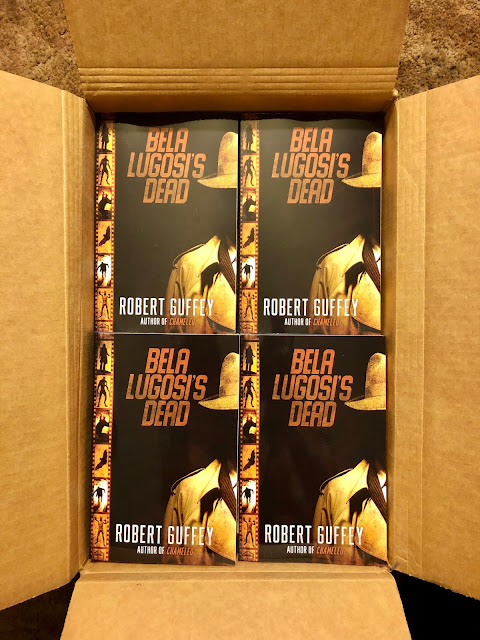 David Niall Wilson, the inimitable founder of Crossroad Press, posted the following message on his Facebook page earlier today: "This just in from Publishers Weekly for Robert Guffey's BELA LUGOSI'S DEAD, available for pre-order from all eBook retailers, paperback preorders on Amazon and soon on all retailers, and upcoming in unabridged audio. If you love old monster movies, and monsters, and a good mystery, pre-order now and help make him famous!"

You can pre-order the book from Amazon right HERE.

“In Robert Guffey's latest and greatest novel, dreams of old movies and nightmares of classic horror rack into sharp focus through the lens of a brave film historian, one determined to squint clearly at fleeting grains of film through the shifting sands of time. Never has the truth of Hollywood been so well revealed through fiction. As a result, Bela Lugosi's Dead delightfully and definitively proves that Bela Lugosi isn't dead.”

"[H]orror fans will delight in how Guffey cleverly immerses movie monsters in the real world. Film buffs and monster enthusiasts will relish the supernatural characters brought to life in this atmospheric celebration of monster mayhem." 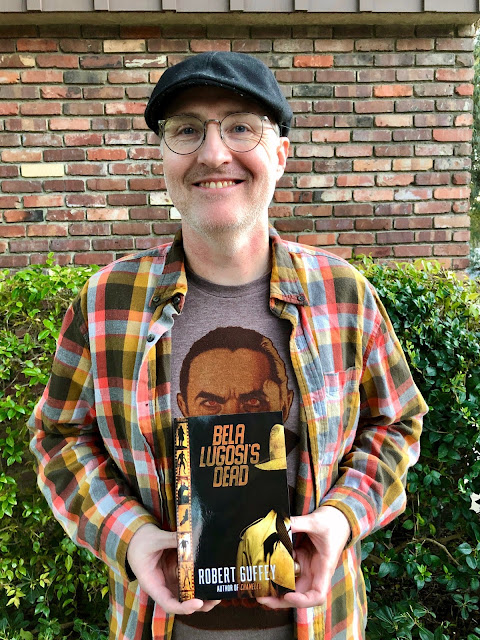 A year of YouTube fantasies about children being killed and eaten under cover of the “deep state” took the Highland Park-bred grandson of a former Texas football coach to the steps of the U.S. Capitol Jan. 6.

Luke Coffee, 41, the actor grandson of 1960s TCU and University of Texas assistant coach Russell Coffee, thought he was going to Washington for the second coming — but not of Donald J. Trump.

Based on his own words, Coffee was among Capitol attackers who went not as Proud Boys or Oath Keepers, but as QAnon activists confusing religion and conspiracy, hoping to impose Christian rule and trigger the biblical second coming of Christ.

“A holy purge is happening, and it’s only from Jesus — it’s not from Donald J. Trump,” Coffee said over and over in videos, some still posted on social media.

He faces charges in connection with the assault of Washington, D.C., police officers with a crutch during the attempted overthrow.

Dark Side of Wonderland

Great art spawns imitation. And great weird art, it seems, spawns still weirder flights of fancy. Lewis Carroll’s twin children’s fantasies, Alice’s Adventures in Wonderland and its sequel, Through the Looking-Glass, and What Alice Found There have both inspired a string of adaptations, artistic and musical responses down the generations.

Now, as the Victoria & Albert Museum prepares to celebrate Alice and her cultural influence in Curiouser & Curiouser, a landmark exhibition next month, a new book containing unseen original images is to expose the secrets behind the darker world of the second Alice story.

“Together these books are really the first psychedelic texts and I like them because there’s no moral lesson. They actually parody authority, like the judiciary and the monarchy, rather than supporting them,” said Jake Fior, an Alice expert and author of Through a Looking Glass Darkly.

“Carroll had a definite interest in the esoteric. I have a catalogue of his possessions, including his library, and he had lots of books on the supernatural,” he told the Observer [...].

“There is no evidence that Carroll was practising magic, but he was interested in telepathy and was a member of the Society of Psychical Research. He also had a well known obsession with wordplay and especially acrostics, and these come from Hebrew mysticism, which he would probably have known,” said Fior.

While working on the book he found that although Carroll was not a Freemason, the Liddell family were very involved in the organisation.

The V&A exhibition, Fior suggests, will be a good opportunity for fans to go back to the darker side of the stories, something that the Disney cartoon version has almost obliterated.