Earlier this year, in a post entitled "BEHOLD!!! THE PROTONG," I wrote extensively about Stanislaw Szukalski's unique theories regarding humanity's connection to what he calls "the Yetinsyny."  According to Richard Chang of the Orange County Register, "[Szukalski] believed that the human race had bred with a competitive race of Yeti (Abominable Snowmen or Bigfoot, for the uninitiated), and the result was a hybrid that polluted the purity of homo sapiens.  Szukalski argued further that the hybrids [i.e., the Yetinsyny] were responsible for many of people's problems throughout history."

Let's fade out on one of my favorite Szukalski drawings (from p. 73 of Szukalski's book, Behold!!! the Protong).... 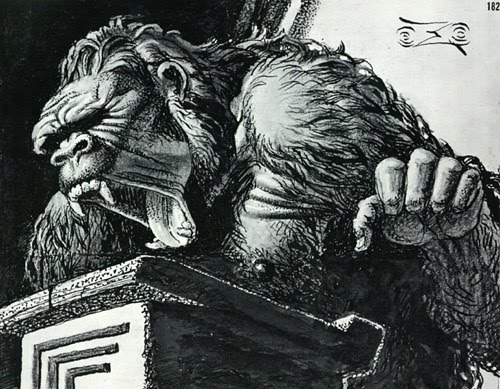 "The howling chest-beating gorilla in the Yetinsyn is perpetually pressed towards its biological preordainment.  It works overtime pounding on the pulpit of subversion, calling all the misfits of the world to unite against the hated Human.  The phrases ring hours after their delivery, 'We must fight against the Tyrants, the Capitalists, the Educated and well... why not against the Good-looking who are loved by beautiful women, too!  Long live da Peep-hole!  Long live the Revolution!'"
--Stanislaw Szukalski, BEHOLD!!! THE PROTONG, p. 72
Posted by Robert Guffey at 1:00 AM