Gary Webb and the CIA

Check out Andrei Burke's 10-3-14 article entitled "When the CIA Conspired to Kill Journalist Gary Webb."  Here are a few excerpts:

"The recent trove of documents that the CIA released under the Freedom of Information Act contained a six-page article titled 'Managing a Nightmare: CIA Public Affairs and the Drug Conspiracy Story' [written by Nicolas Dujmovic] that was published in the agency’s in-house newsletter Studies in Intelligence. The article is a detailed account of the initial impact and eventual aftermath of Pulitzer Prize-winning journalist Gary Webb’s groundbreaking 'Dark Alliance' series of reports, published in 1996 by the San Jose Mercury News. Webb’s series was an in depth investigation into the CIA’s implicit role in the explosion of crack cocaine in America’s urban centers, through Nicaragua’s Contra rebels, who were trafficking cocaine into the United States to fund their counter-revolutionary campaign […].

"The CIA closely observed these developments, and collaborated when and where it could with outlets challenging Webb’s story. In 'Managing a Nightmare,' Dujmovic boasted that the agency virtually abandoned its longstanding policies in order to discredit Webb and the series. 'For example, in order to help a journalist working on a story that would undermine the Mercury News allegations, Public Affairs was able to deny any affiliation of a particular individual—which is a rare exception to the general policy that CIA does not comment on any individual’s alleged CIA ties,' he wrote.
"[Ryan Devereaux of] The Intercept notes:
"[Dujmovic's 'Managing a Nightmare'] chronicles the shift in public opinion as it moved in favor of the CIA, a trend that began about a month and a half after the series was published. 'That third week in September was a turning point in media coverage of this story,' Dujmovic wrote, citing '[r]espected columnists, including prominent blacks,' along with the New York Daily News, the Baltimore Sun, The Weekly Standard and the Washington Post. The agency supplied the press, 'as well as former Agency officials, who were themselves representing the Agency in interviews with the media,' with 'these more balanced stories,' Dujmovic wrote. The Washington Post proved particularly useful. 'Because of the Post‘s national reputation, its articles especially were picked up by other papers, helping to create what the Associated Press called a "firestorm of reaction" against the San Jose Mercury News.' Over the month that followed, critical media coverage of the series ('balanced reporting') far outnumbered supportive stories, a trend the CIA credited to the Post, The New York Times, 'and especially the Los Angeles Times.' Webb’s editors began to distance themselves from their reporter.
"The CIA 'didn’t really need to lift a finger to try to ruin Gary Webb’s credibility,' said Webb biographer Nick Schou. 'They just sat there and watched these journalists go after Gary like a bunch of piranhas.'
"What was a minor victory for the CIA became a living hell for Webb. He was eventually removed from his position at the Mercury News, and ultimately took his own life […]."
To read Burke's entire article, click HERE. 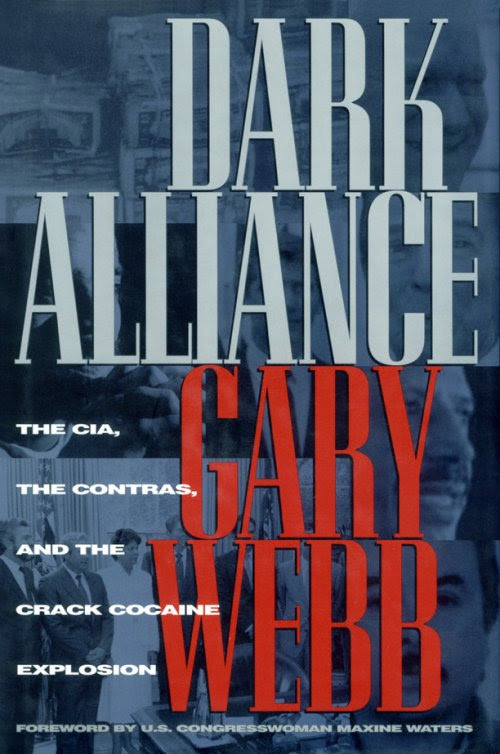 Posted by Robert Guffey at 9:29 AM