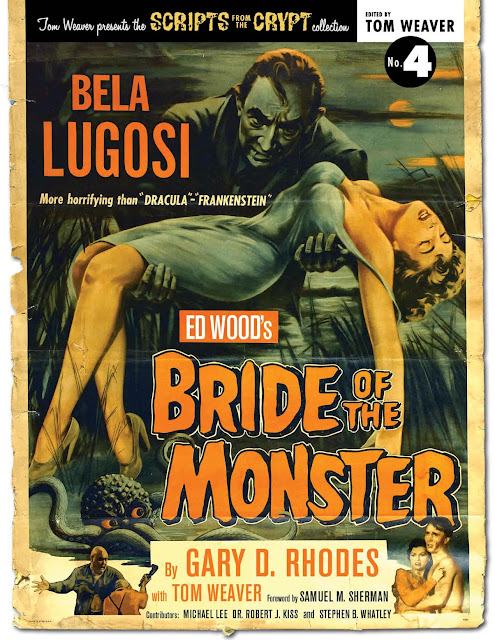 After writing a brilliant book entitled Tod Browning’s Dracula (Tomahawk Press, 2015), in which the 1931 cinematic adaptation of Bram Stoker’s classic novel Dracula is lovingly analyzed by film historian Gary D. Rhodes from every possible angle, it might at first seem perverse to follow up such an erudite tome with a nearly 300 page book entitled Ed Wood’s Bride of the Monster.  Ever since Harry and Michael Medved spotlighted his films in their 1980 book The Golden Turkey Awards, Edward D. Wood, Jr. has attained the dubious honor of being widely recognized as the most incompetent filmmaker who ever existed.  Among the worst (best?) of these notorious films is Wood’s 1956 Bela Lugosi horror flick Bride of the Monster.  Leaving aside any critical assessments of either film for the time being, it’s undeniable that both Tod Browning’s Dracula and Ed Wood’s Bride of the Monster are watersheds in the career of Lugosi.  Dracula, after all, was Lugosi’s first starring film role and Bride of the Monster his last.  Rhodes has, therefore, written two volumes that represent the Alpha and Omega of Lugosi’s nearly three-decade-long career as a Hollywood icon.

Whereas Tod Browning’s Dracula is scholarly and exhaustive in its scope, Ed Wood’s Bride of the Monster is breezy and informal, offering its readers little known facts about the behind-the-scenes production of the film as well as original interpretations of previously unchallenged assumptions regarding Wood’s oeuvre.  Rhodes successfully reconfigures the mainstream view of Wood’s skills, pointing out that several key elements of Bride of the Monster are actually quite professional, focusing in particular on the cinematography of William C. Thompson, the musical score composed by Frank J. Worth, and (of course) the featured performance of Lugosi.  Almost six decades after Bride of the Monster’s debut, it’s about time a respected film scholar acknowledged that Ed Wood was by no means the “worst director” who ever lived.  I’ve seen plenty of bad movies in my lifetime, and the unmistakable mark of any truly inept film is that one never, ever wants to see it again.  I’ve never met anyone who, after seeing Ed Wood’s 1959 film Plan 9 from Outer Space for the first time, didn’t wish to view it at least once more.  I’ve seen Plan 9 a half dozen times or more, and each viewing inevitably uncovers some surprising new element that escaped me the first time around.  The simple fact of the matter is that a truly bad film is dull, dull, dull and does not instill a desire for multiple viewings.  Plan 9, despite all its profound imperfections, could never be accused of being boring.  Unlike some recent multimillion dollar blockbusters, the pace in Wood’s film never once lags.  One might suggest that this is due solely to Ed Wood’s emptyheaded naivety, akin to a “lucky” accident that occurs when a child haphazardly creates a hand painting that just so happens to resemble a Jackson Pollock canvas.  But, of course, no film was ever made by accident.


In 2016, almost four decades since the release of the Medveds’ book The Golden Turkey Awards, one must acknowledge that Ed Wood succeeded in creating genuinely iconic images in his films (e.g., the atmospheric scene in Plan 9 in which Vampira rises from her grave and staggers toward Wood’s camera) that have impressed themselves indelibly on several generations of film fans and American pop culture in general.  I don’t believe this interest has accrued around Wood’s films due to a freakish accident.  For example, Rhodes correctly points out that Wood’s first film, the transvestite epic Glen or Glenda (1953), is a consciously avant-garde experiment that went out of its way to challenge the social mores of the 1950s.  Whether deemed good art or bad art, Glen or Glenda was without a doubt decades ahead of its time.  It’s refreshing to see a scholar as respectable as Rhodes accepting Wood’s films on their own terms for a change, rather than as an opportunity to falsely revile Wood as a failed artist, a pastime intermittently indulged in by other established film critics.  Keep in mind that failed artists aren’t remembered after their deaths.  That Wood’s films continue to draw a substantial audience in the twenty-first century suggests there’s an ineffable (though admittedly perverse) magic at work in Wood’s films that transcends mere childish ineptitude.


Ed Wood’s Bride of the Monster, released this past Halloween, is available for purchase from Amazon as well as from its publisher, BearManor Media.
Posted by Robert Guffey at 11:34 PM