Ye Shall Know Them By Their Trinkets 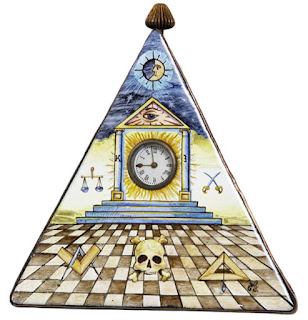 "Their members use secret handshakes and coded language. In temples, they don ancient regalia, helmets, or masks. Thanks to their veils of secrecy and archaic symbols like the All-Seeing Eye, outsiders find fraternal orders endlessly fascinating. But what does it all mean?
"By the early 20th century, nearly all of America’s white wealthy elite belonged to one secret society or another. That fueled suspicions—still rampant today—that Freemasons, Odd Fellows, and other fraternal members have employed occult rituals to gain or maintain their power. But a collector named AR8Jason, who has posted on Collector Weekly’s Show & Tell, thinks the appeal of such clubs was much more simple than that.
"'Some of these groups are simply the big-boy versions of the little boy clubs,' he says. 'As a little boy, I lived in a small town in Oklahoma. There, my friends and I started a club. We had the secret handshake, the passwords. Then, I grew up and I found out that grown men were doing the same thing. They just had better uniforms.'
"Recently, the fancy trappings of dwindling fraternal orders have caught the attention of Hollywood, pop stars, and interior designers alike. In 2004, the film 'National Treasure' posited that the Founding Fathers—many of whom were, in fact, Masons—sprinkled currency and documents such as the Declaration of Independence with clues to the location of an unimaginably vast treasure.

"Masonic symbols also pop up in music videos by Nicki Minaj, Jay-Z, and Lady Gaga—these appearances are viewed by conspiracy theorists as evidence of a plot by the secret elite to brainwash the public into submission. And now, Masonic and Odd Fellows folk art, like hand-painted silk flags, are popping up in trendy Brooklyn restaurants as quirky decorative pieces.
"For some, Masonic and other fraternal items, particularly those from the turn of the 19th and 20th centuries, are simply sexy collectibles. For others, these groups are linked to devil-worship and sinister plots to install a New World Order, ideas fed by fictional films like 2006’s 'DaVinci Code' [...].
"Still, given all the forms of entertainment available today, fraternal orders per se have waned in popularity with Americans under the age of 40. But Lettelier says Masonic teachings continue to reach new audiences through other formats. Ever heard of a little movie called Star Wars? Lettelier recognizes Masonic ideas in the Jedi philosophy about mastering the Force. Perhaps the Masons have succeeded in taking over the world, after all."
To read Hix's entire article, click HERE.