A Box of Dead Dogs!

A package overbrimming with copies of my latest book, UNTIL THE LAST DOG DIES, has just arrived in the mail.  I'm told that those of you who pre-ordered the book are already receiving their copies.  Since the novel is not officially released until November 21st, that means there's still time for you stragglers out there to pre-order this beast.  (The world is veritably TREMBLING in anticipation!)

Click HERE to pre-order your copy of UNTIL THE LAST DOG DIES! 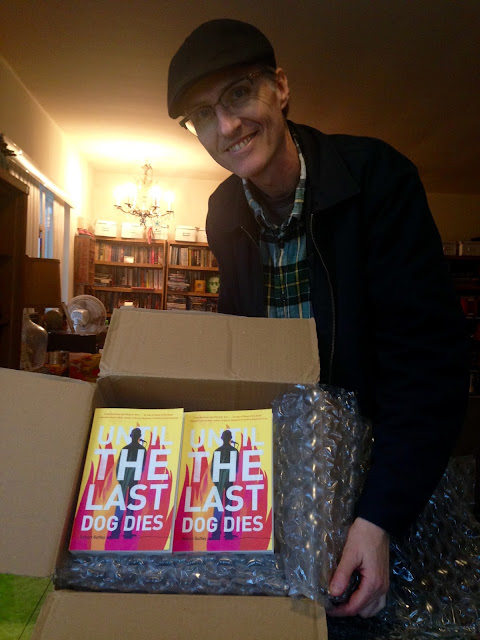 Here's the back cover copy ballyhoo:

A young stand-up comedian must adapt to an apocalyptic virus affecting people’s sense of humor in this darkly satirical debut novel.

What happens when all humor is wiped off the face of the Earth?

Around the world, an unusual viral plague is striking the population. The virus attacks only one particular section of the brain. It isn’t fatal, but it results in the victim’s sense of humor being obliterated. No one is immune.

Elliot Greeley, a young stand-up comedian starving his way through alternative comedy clubs in Los Angeles, isn’t even certain the virus is real at first. But as the pandemic begins to eat away at the very heart of civilization itself, the virus affects Elliot and his close knit group of comedian friends in increasingly personal ways. What would you consider the end of the world?

Until the Last Dog Dies is a sharp, cutting satire, both a clever twist on apocalyptic fiction and a poignant look at the things that make us human.

“Taps into the cultural zeitgeist . . . A nihilistic satire that takes the idea that death is easy and comedy is hard to a whole new level.”—Kirkus Reviews “Guffey’s sardonic, cleverly written comedic debut relies heavily on absurd synchronicity, bold characterization, and heavy irony to make its points about the apocalyptic nature of American humorlessness.”—Publishers Weekly “A playful amalgam of Andy Kaufman and Philip K. Dick by way of Shaun of the Dead.” —Damien Lincoln Ober, author of Doctor Benjamin Franklin's Dream America “This satirical tale explores the role of comedy in maintaining a healthy democracy. . . . A clever concept.”—Kirkus Reviews
Posted by Robert Guffey at 11:37 AM