Dr. James Ketchum and His Billion Dollar Barrel of LSD

Further intriguing information has emerged regarding the career of Army psychiatrist James Ketchum in the wake of his recent death on 5-27-19. What follows is an excerpt from Matt Novak's 6-7-19 Gizmodo article entitled "The U.S. Army Once Kept $1 Billion Worth of LSD in a Maryland Office for Some Reason":


James Ketchum, an Army psychiatrist who conducted controversial drug experiments on members of the U.S. military, died last month, on May 27, at the age of 87. And while Ketchum’s legacy is filled with plenty of weird and horrifying tales, there’s one story that should get more attention in the wake of his death.
Specifically, we should probably talk about the time that Ketchum found roughly $1 billion worth of LSD, enough to “intoxicate several hundred million people,” according to Ketchum, just sitting in his office—and the fact that it disappeared without explanation.
Ketchum worked at the U.S. Army’s secluded Edgewood Arsenal in Maryland during the 1960s and will be forever remembered as the man who gave U.S. servicemen mind-altering substances like LSD to see how they would react. Ketchum’s experiments were conducted on an estimated 7,000 men from 1955 until 1975 using over 250 different substances. The experiments were part of a broader military effort during the first Cold War to understand how different chemicals might be used in warfare against the Soviet Union.
It’s not just the hypothetical use of powerful drugs against a foreign adversary that raised very serious concerns about Ketchum’s work. Ketchum was rightly criticized for conducting experiments on U.S. Army personnel who didn’t know what they were taking, and the Pentagon failed to provide safeguards to ensure that the servicemen received medical care after the trials.
Ketchum wrote a memoir titled Chemical Warfare Secrets Almost Forgotten: A Personal Story of Medical Testing of Army Volunteers, published in 2006, defending his actions, but the book also contains a bizarre anecdote that should raise a lot of questions. The story is buried at the end of the Washington Post’s obituary for Ketchum, published earlier this week.
From the Washington Post:

In his memoir, “Chemical Warfare: Secrets Almost Forgotten” (2006), Dr. Ketchum said that although he abstained from taking BZ, he was sometimes mystified by what he saw at Edgewood. One day, he said, he walked into his office to find a “large black steel barrel.” Inside were glass canisters filled with LSD — enough to intoxicate several hundred million people, by his estimate, and worth nearly $1 billion on the street.
Within a week, the barrel was gone. Dr. Ketchum said he never learned what it was for.

But the Post’s summary of the event perhaps doesn’t do it justice. It’s worth quoting the book passage at length to accurately explain what we’re talking about....
To read Novak's entire article, click HERE.

After you've read Novak's article, you might want to check out "Faith of Our Fathers," Philip K. Dick's classic 1967 short story about a dystopia in which the citizenry is kept in check with hallucinogens covertly pumped into the water supply. Dick later commented, "...it's been my impression since [the publication of 'Faith of Our Fathers'] that when the roof fell in on me years later, this story was in some eerie way involved." You can read "Faith of Our Fathers" (which was nominated for the 1968 Hugo Award for Best Novelette) in Harlan Ellison's Dangerous Visions anthology. 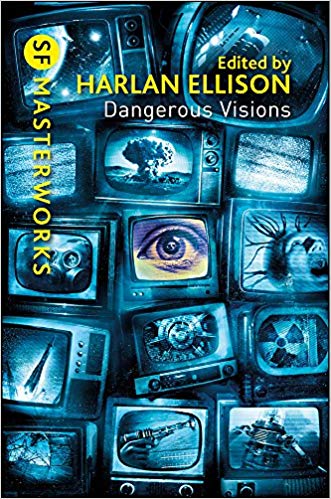 Click HERE for further information about "Faith of Our Fathers."
Posted by Robert Guffey at 12:33 PM