TO THE DEVIL A DAUGHTER

What better way to celebrate Friday the 13th than by watching Sir Christopher Lee expound on the subject of secret Satanic rites? In the following excerpt, from an interview conducted in 1975, Lee discusses his 1976 Hammer horror film TO THE DEVIL A DAUGHTER, Peter Sykes' adaptation of Dennis Wheatley's 1953 novel of the same name. (Coincidentally, Shout! Factory is scheduled to release the Blu-ray of TO THE DEVIL A DAUGHTER only a few days from now.) 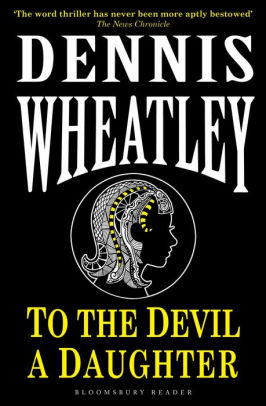 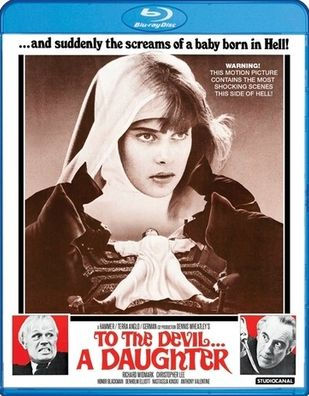 TO THE DEVIL A DAUGHTER / ORIGINAL THEATRICAL TRAILER (1976):


As for the author of TO THE DEVIL A DAUGHTER, Dennis Wheatley's many intersections with the world of the occult during World War II is covered by Jay Dyer in this 5-5-16 ESPIONAGE HISTORY ARCHIVE blog post entitled "OCCULT MI6: DENNIS WHEATLEY":

Wheatley was the son of a winemaking family, and he would cause some stir early in his college days for creating his very own campus “secret society.” Following his expulsion for this incident, Wheatley joined the military, fighting in World War I as a Royal Artillery Lieutenant. He was then tasked with military intelligence and covert operations in World War II, serving in the London Controlling Section. After his war activities, Wheatley worked for British Intelligence and was introduced to notorious occultist and black magician Aleister Crowley [...]. Wheatley, [Maxwell] Knight and Ian Fleming [the creator of James Bond] were the chief architects of the ruse to co-opt Crowley for the purpose of luring Nazi Rudolph Hess to parachute into Scotland [...]. Wheatley, as a high level insider in the Western intelligence elite and an associate of Crowley, couldn’t help but reveal the actual workings of the upper crust, now evident in the stories of the Franklin Coverup, the Dutroux Affair and the UK’s Jimmy Savile.

Though never mentioning Wheatley's interest in the occult, Tina Rosenberg covers Wheatley's World War II espionage career in this DAILY BEAST article entitled "The Novelist Who Spied: How Dennis Wheatley Helped Defeat the Nazis" (originally published in August of 2012, and updated in July of 2017):


In the 1930s Dennis Wheatley was Britain’s most popular thriller writer. As the war began, he started a series of novels featuring secret agent Gregory Sallust. Before there was James Bond, there was Gregory Sallust. Sallust is ruthless and charming, a connoisseur of rare wines and rare women. Most important, he speaks German like a native. In book after book, Sallust dons a German uniform and infiltrates the Nazi machine—in one case, stealing the identity of the head of the Gestapo’s foreign section.
As happens in books like these, Sallust pretty much single-handedly wins the war. During a long, drunken night dissecting the map of Europe with Hermann Göring, Sallust steals a document that keeps Britain from surrender in her darkest days. He tricks Hitler into invading the Soviet Union. He dazzles Göring, and everyone else he meets, with his military assessments. His knowledge is encyclopedic, his strategic analysis brilliant. He is a master of deception.
Then at the end of 1941, Dennis Wheatley stepped into the pages of his own novels.
He went to work in Churchill’s bunker—the only civilian to be recruited onto the Joint Planning Staff. His mission was to deceive Hitler. Wheatley was part of a tiny group of deceivers—at one point, he worked alone—who thought up cover plans for Allied operations and ruse after ruse to make the Germans believe them. Their greatest achievement, of course, was that on D-Day, the Allied invasion of France took the Germans completely by surprise.
When Wheatley joined Churchill’s staff, he had already planted himself inside the head of the enemy—“Gregory and I had been looking pretty closely at the Nazis for quite a while,” he told an interviewer. And he had been inventing strategic deceptions for Sallust for years. But deception was familiar to Wheatley on a different level as well. Deception involves first choosing a story—story is actually the term of art—that will be your cover plan. Then you break that story into tiny pieces and draw up a schedule for spooning it bit by bit into the maw of the enemy—which morsel fed by what channel on what date. Not too obvious—give him the telling detail and let the enemy make the connections on his own. That is how to write a deception plan. But it is also how to write a novel.
The deception planners borrowed from fiction, including for one of the most celebrated operations of the war: Operation Mincemeat. A body dressed like a major in the Royal Marines was pushed out of a submarine near the Spanish coast, carrying a letter designed to fool the Germans about the coming invasion of Sicily.
The idea behind Mincemeat came from a detective story. In the 1937 novel The Milliner’s Hat Mystery by Basil Thomson, the hero, Inspector Richardson, finds a body in a barn. All the documents on the body have been forged; Richardson’s task is to find the man’s real identity. The idea stayed with a young Naval Intelligence officer who owned all of Thomson’s detective stories: Ian Fleming.
Fleming’s novels would come later—his first, Casino Royale, was not published until 1953. During the war he was a colleague of Wheatley’s, and a guest at his dinners. That James Bond greatly resembles Gregory Sallust is not an accident.
Dennis Wheatley’s books sold more than 50 million copies over his lifetime. Yet today his books have disappeared: unknown in America, largely forgotten even in Britain. What will last forever are his other fictions—the stories he wrote from Churchill’s bunker, aimed not at millions of readers, but at only one.