The unabridged Audible Audiobook of my latest novel, BELA LUGOSI'S DEAD, is now available! It's brilliantly read by the talented SAMUEL E. HOKE. Hoke was so dedicated to nailing the audio version that he contacted me before he began narrating the novel to make sure the accent of a particular character was exactly correct. He also went out of his way to research some of the films and documentaries about the real people and events upon which the novel is based. If you're interested, you can listen to a sample of the audiobook right HERE!

“Blending intertextual rampage through the horror-movie canon with engrossing noir mystery and a backdrop of Hollywood esoterica, Robert Guffey serves up an intoxicating pulp cocktail that will leave you wanting more. A crepuscular treasure from a fascinating author.”

--ALAN MOORE, author of V FOR VENDETTA and WATCHMEN

“In Robert Guffey's latest and greatest novel, dreams of old movies and nightmares of classic horror rack into sharp focus through the lens of a brave film historian, one determined to squint clearly at fleeting grains of film through the shifting sands of time. Never has the truth of Hollywood been so well revealed through fiction. As a result, BELA LUGOSI'S DEAD delightfully and definitively proves that Bela Lugosi isn't dead.”

"[H]orror fans will delight in how Guffey cleverly immerses movie monsters in the real world. Film buffs and monster enthusiasts will relish the supernatural characters brought to life in this atmospheric celebration of monster mayhem."

"The sensation [of reading BELA LUGOSI'S DEAD] is like being led deep underground while your flashlight grows dimmer and dimmer, until you’re left in total darkness. That’s when the lights of a subterranean crypt flash on to reveal that you’re not where you expected to be, and where you are is far worse than you could have imagined. The result is an ending that left me chilled and took me a few days to fully process. As shocking as it was, everything was set up from the beginning. I know, I went back and checked, and have to give Guffey credit for pulling off a literary sleight of hand that caught me by surprise. I won’t spoil it with more, except to say that like the frog in water that’s warmed so slowly it doesn’t realize it’s coming to a lethal boil, Guffey’s readers face an equally stunning conclusion." 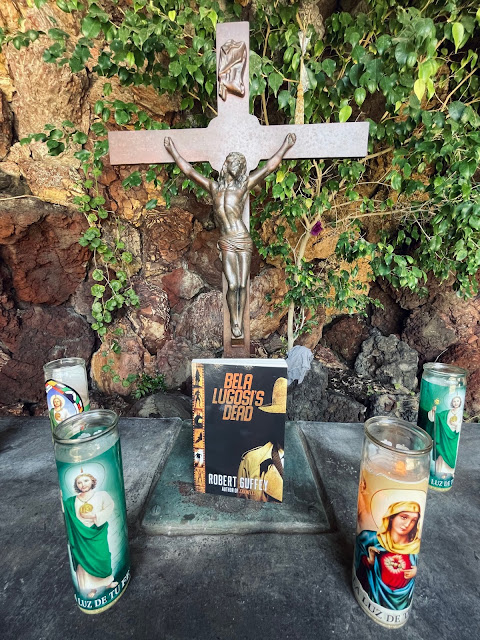