The countdown to CHAMELEO begins here!

My third book, CHAMELEO:  A STRANGE BUT TRUE STORY OF INVISIBLE SPIES, HEROIN ADDICTION, AND HOMELAND SECURITY, is scheduled to be published by OR Books precisely one month from now.  The psychic energy caused by the mounting tension among OR Books' insatiable readers is reportedly disrupting the Earth's core and generating unprecedented quakes all around the globe.  In fact, last Tuesday a sudden and dramatic temblor almost sent San Pedro, CA toppling into the sea.  For numerous members of the American Booksellers Association (according to the President of the ABA), this anticipation is almost too much to bear.  Nonexistent copies of CHAMELEO are flying off the shelves even before it's published, so make sure you're among the first lucky readers to buy a ticket on this apocalyptic, out-of-control CHAMELEO train and reserve your copy TODAY!

Click HERE to preorder the strangest and truest book of 2015!


"Guffey is my kind of crazy. He understands that the universe is preposterous, life is improbable, and chaos rules: get used to it." —Pat Cadigan, author of Mindplayers
"Robert Guffey's writing has impressed, entertained, and enlightened me pretty much since I first met him, as one of my Clarion West students. My suggestion? If he wrote it, read it."
—Jack Womack, author of Random Acts of Senseless Violence 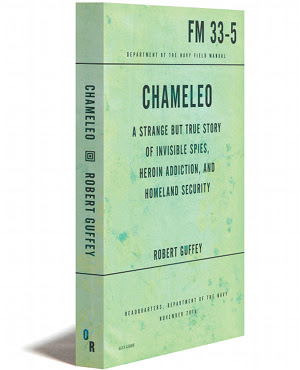