Film scholar Gary D. Rhodes has just published a revelatory new book entitled TOD BROWNING'S DRACULA.  An excerpt of this book first appeared in James Clatterbaugh's consistently insightful magazine Monsters from the Vault #29 under the title "The Curious Undead Life of Tod Browning's Dracula."  Much of what impressed me about that original article applies to Rhodes' book-length version as well.  Though I've read a great many volumes concerning cinematic history, this is by far my favorite.  For a variety of improbable reasons, Tod Browning's Dracula has become one of the most misunderstood and underappreciated films produced in that seminal decade of the 1930s.  Though the film's influence is vast and undeniable, in recent years critics have used up countless reams of paper and hundreds of thousands of words in an attempt to prove that the film is an artistic failure on all fronts.  Since the beginning of the 1990s, there has been a trend among professional cinema scholars, as well as among amateur film buffs, to prove that George Melford's Spanish version of Dracula (produced at Universal Studios concurrently with Browning's film) is a superior adaptation of Bram Stoker's classic supernatural novel.  In fact, this was one of the core points of David Skal's 1990 book Hollywood Gothic.  Skal insists that Melford's Dracula is far more experimental cinematically than Browning's version, which is often accused of being far too stagebound and theatrical for its own good.  An example that Skal often uses to back up this viewpoint is the claim that Melford's film utilizes the moving camera far more than Browning's version; however, this and other overused examples are, more often than not, based on blatant misperceptions or outright falsehoods.  Rhodes' new book leaves no room for doubt in this regard.

Back in 2011, when I was about a quarter of the way through Rhodes' original article, I recall the following thought suddenly popping into my head:  "I've been waiting twenty years for someone to write an article like this."  Why twenty years?  At the time of the article's release, it had been about two decades since the publication of Hollywood Gothic.  Though I appreciate Skal's unique approach to film history (and I love his follow-up book, The Monster Show, even more), I suspect his stance regarding the Melford Dracula was born more out of narrative necessity than out of genuine conviction.  The idea of a lost classic emerging out of the shadow of its far more famous counterpart is a romantic notion and makes for a wonderful story arc too perfect for a genuine fabulist to resist.  Also, the Melford Dracula wasn't readily available at the time of the book's initial publication, so if you were a casual reader and not a film scholar, you had to take Skal's word for it.  I did so at the time, as did many of Skal's readers.  In the years since, however, I've grown more and more perplexed over the unthinking hostility directed toward Browning's Dracula.  I've always found the film effectively eerie, not just in its first reel, but throughout its entire seventy-five minutes.  It took Rhodes to point out, at long last, that those elements of Browning's film habitually accused of being far too stagebound are, in fact, some of the film's most effective scenes.  After all, the haunting images created in one's imagination when hearing Renfield (memorably portrayed by Dwight Frye) hiss out the words, "Rats... rats... thousands of them... millions of them," is far more disturbing than merely showing such an image through the use of base special effects.


In Tod Browning's Dracula, Rhodes demonstrates that his conclusions are not in any way subjective; they're a product of pure mathematics, e.g., a matter of simply counting how many shots in the Browning film utilize a moving camera as opposed to the Melford version.  He then very effectively underscores how much more artistically--from a thematic point of view--Browning employs the moving camera as opposed to Melford.   Simply put, devoid of any hyperbole whatsoever, Rhodes' new book is a game changer.  Tod Browning's Dracula is a prime example of excellent film scholarship because it's about far more than just comparing and contrasting two black and white films from the 1930s; at its core, the book is about perceptual psychology, and the fact that human beings (if told something often enough and with great conviction) tend to believe unfounded claims without first examining their veracity themselves.  Pretty soon an unsupported rumor becomes a possibility, and a possibility becomes a fact, and a fact becomes common knowledge.  Rhodes' book upends all the rumors and what-ifs and chimerical half-truths, and successfully shines the light of genuine scholarship on the facts underlying the lies that have shrouded this historically important film for the past several decades.

I urge you to purchase Rhodes' book as soon as possible, and this can be done by clicking right HERE. 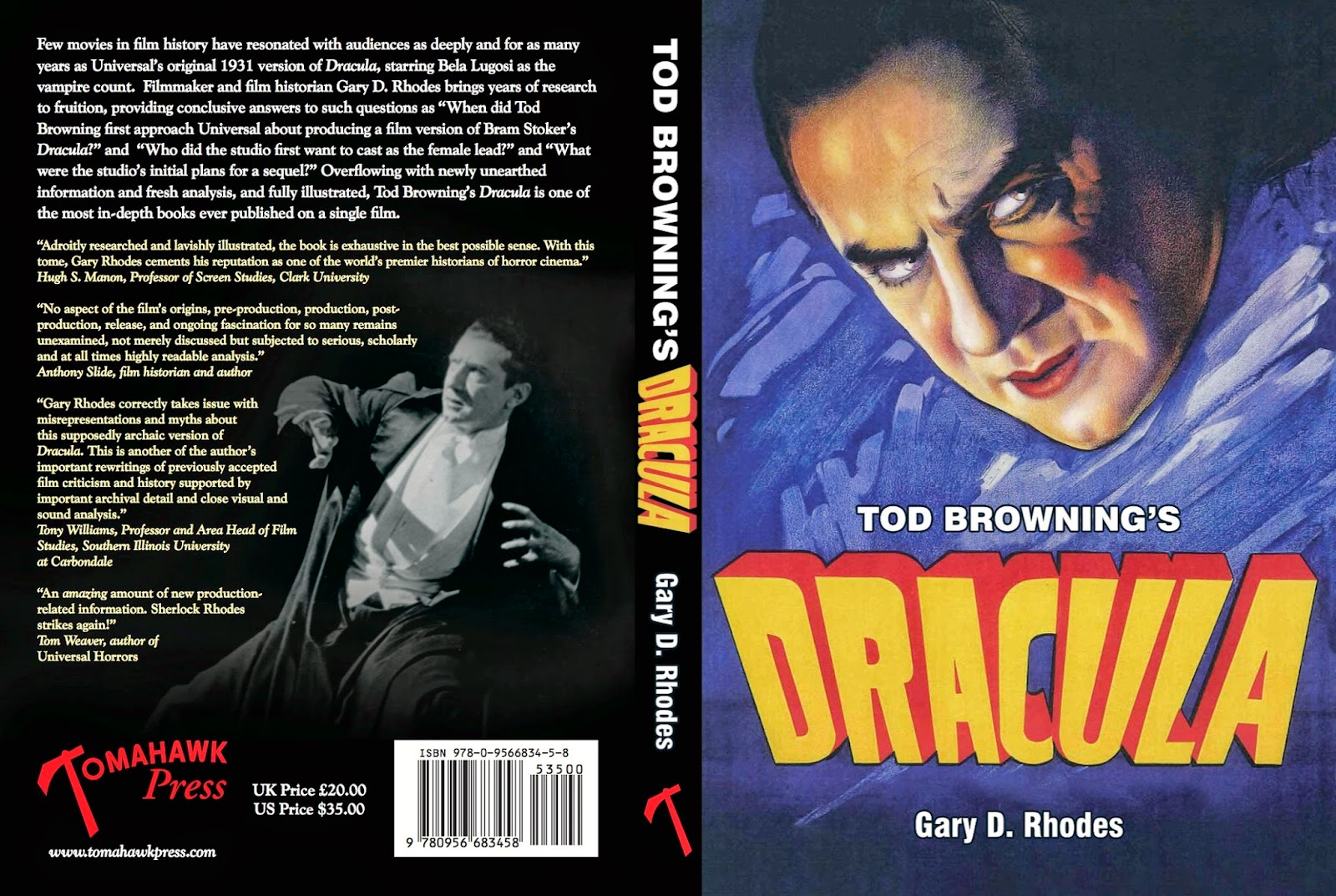