Back in March of this year I reviewed TOD BROWNING'S DRACULA by Gary D. Rhodes, one of the best books about cinema I've ever read.  (You can read that review by clicking HERE.)  Only a few months later Rhodes released a follow-up volume that is, in many ways, even more compelling than his examination of "the curious undead life" of the 1931 Dracula.  BELA LUGOSI IN PERSON is truly unique, as I can't think of any other book that traces a single artist's career only through their live public performances--events considered incidental in most other biographies.  BELA LUGOSI IN PERSON by Rhodes and Bill Kaffenberger traces the actor's career from 1931 to 1945, as seen through a meandering series of personal appearances including interviews, variety shows, vaudeville sketches, and three-act plays.  Over the course of this strangely epic and quixotic journey, many myths about Lugosi's career are exploded, reexamined, and turned upside down.

Many artists' reputations are overshadowed posthumously by the legends they leave behind in their wake, but in Lugosi's case the dark rumors, weird folklore and apocryphal anecdotes have taken on an unprecedented (and unholy?) life of their own, threatening to distort the truth completely.  Rhodes and Kaffenberger correct numerous fallacies regarding Lugosi's dizzying ascent and precipitous decline in the Hollywood film community while also unveiling previously unknown facts about his personal life and political activism.  Some of these facts will be intriguing only to the hardcore horror maven while others are truly revelatory from a historical perspective.

In the former category, for example, we learn in Chapter 9 that in September of 1950 New York TV station WPIX aired what Rhodes and Kaffenberer call "one of the most fascinating and yet most unknown Lugosi projects ever made."  Entitled Murder and Bela Lugosi, the program was "'the first film show on TV to also have the star of the film version in person... Lugosi [offered] bits of narration to complement showings of many of his old movies...,'" which means that Lugosi was (surprisingly) the first horror film host on television, several years before this format became a perennial trend on American television beginning with the infamous Vampira in the mid-'50s, and continuing with such colorful TV personalities as Ghoulardi in the 1960s, Morgus in the 1970s, Elvira in the 1980s, and Tom Servo and Crow T. Robot of Mystery Science Theatre fame in the 1990s and beyond.

Infinitely more significant from a political and historical perspective, however, are the copious revelations offered up in Chapter 12 (appropriately entitled "Horror Noir"), in which we learn that the FBI's interest in Lugosi's Communist ties was far more intense than previously suspected.  Several years ago I filed a Freedom of Information Request regarding the FBI's surveillance of Lugosi and received a single document in response.  Due to the fact that I've experienced the FBI's less-than-faithful interpretations of the FOIA laws in the past (e.g., see Chapter 22 of my book, Cryptoscatology), I suppose I shouldn't be surprised by this "oversight" on the part of the FBI.  The plethora of information regarding the Agency's surveillance of Lugosi on display in the pages of BELA LUGOSI IN PERSON merely underscores the labyrinthine paths a dedicated researcher must be willing to travel in order to circumvent the agency's unwillingness to comply with the most basic of FOIA requests regarding even "subversives" who have been dead for over five decades.  Though I succeeded in extracting only a single document from the FBI's tight grip, Rhodes and Kaffenberger went above and beyond the call of duty and managed to uproot one revelation after another.  (It's important to note that there are 188 end notes for this chapter alone.)  As Rhodes and Kaffenberger write near the beginning of Chapter 12:

"...there were others monitoring Lugosi as well, some without his knowledge, such as the Federal Bureau of Investigation.  And then there were those in the U.S. government that he knew about, notably the Office of Strategic Services.  However, he was bereft of key information about their objectives, about their interviews with his detractors, and about the sheer amount of space given to him in their voluminous files.

"Amid dark shadows, unfavorable rumors about Lugosi and his political life festered during 1944 due to a bizarre cast of real-life characters who did not always have Lugosi's welfare in mind.  Here was a story of wartime suspicions and intrigue.  Here was a story about who was standing in the shadow of whom.  Here was a story exhibiting--to rewrite the closing line in John Huston's noir classic The Maltese Falcon (1941)--the stuff that nightmares are made of ."

Near the end of this chapter, Rhodes and Kaffenberger sum up the U.S. government's acute interest in Lugosi in this way:  "Was Lugosi a Communist?  There is certainly no evidence that he was during his life in America.  By contrast, it seems as if he was exactly what he claimed to be:  an extremely liberal Democrat.  Though it is impossible to say with certainty, rumors about Lugosi the Communist would seem to be nothing more than that:  rumors spread by those who disliked him."

Why did these FBI informants dislike Lugosi so much?   One must read Rhodes and Kaffenberger's entire book for possible answers to that question, but suffice it to say that Lugosi's very vocal left-wing political activism no doubt played a significant role in launching the various surveillance programs mounted against him.  For those of you whose image of Lugosi's personality and career has been formed entirely by Tim Burton's 1994 Ed Wood biopic, I recommend purchasing a copy of BELA LUGOSI IN PERSON to uncover the complex truths that have been tucked away for far too many decades in the shadows of neglected newspaper archives and in the near impregnable files of the Federal Bureau of Investigation. 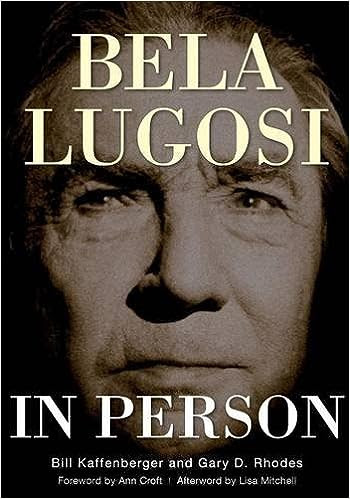 Posted by Robert Guffey at 1:57 PM