Harlan Ellison, the legendary author of well over a thousand short stories, has passed away at the age of 84.  Back in August of 2014 I mailed Harlan a copy of my book, Spies & Saucers, a collection of three interlinking novellas that all take place in the 1950s.  Along with the book I included a cover letter explaining how much his work had meant to me over the years.  It just so happened that the package arrived on his doorstep the very same day Robin Williams died.  Williams was Harlan's longtime friend, appeared alongside him in Erik Nelson's 2008 documentary Harlan Ellison:  Dreams With Sharp Teeth, and even inspired one of his short stories ("Keyboard") in Harlan's 1997 collection, Slippage.  About a week after putting that package in the mail, I received a brief message from Harlan telling me how much my letter had meant to him on an otherwise bleak day.  That I had contributed, in some small way, to easing such overwhelming and incomprehensible pain meant a great deal to me.

A few months later, in December, I sent Harlan a copy of my recently published New York Review of Science Fiction piece about his two latest books, Pulling a Train and Getting in the Wind.  Once again, Harlan responded not long afterwards.  As with the previous correspondence, the letter was cleanly written on a vintage Smith-Corona manual typewriter and read (in part):

I am in your debt; unfortunate that [for propriety's sake, I've redacted a caustically humorous remark about a deceased science fiction editor].  But now I have the Good Words, and I thank you evermuch!

The letter now hangs on my wall, framed in glass.  Harlan deemed something I wrote to be a "dynamite, day-making killer," and pleased him enough to claim that he was in my debt.  Well, of course, the situation was the other way around and always would be.  Anyone who was ever touched by the fiery power of his imagination will forever be in Harlan's debt.

If you've somehow escaped the hypnotic pull of Harlan's work up to this point, I suggest beginning with my favorite of his many excellent collections, Angry Candy (1988), which my older brother bought for me as a Christmas gift when I was sixteen years old.  That might very well be the best Christmas gift I've ever received.  Appropriately, given today's events, Angry Candy is all about dealing with the unbearable mysteries of death.

Synchronistically, Harlan's latest book, Blood's a Rover, arrived on my doorstep just yesterday.  I had begun reading it only hours before his death.

As when Ray Bradbury passed away in 2012 (also in the month of June), I decided to honor Harlan's memory by writing a new short story.  My Postscripts novelette, "The Wedding Photographer," emerged from that protracted period of mourning for Bradbury and remains one of my favorites of the thirty or so stories I've published.  As Harlan himself wrote in the Author's Note at the end of "The Museum on Cyclops Avenue" (a story inspired by Robert Bloch's passing), "The work goes on." 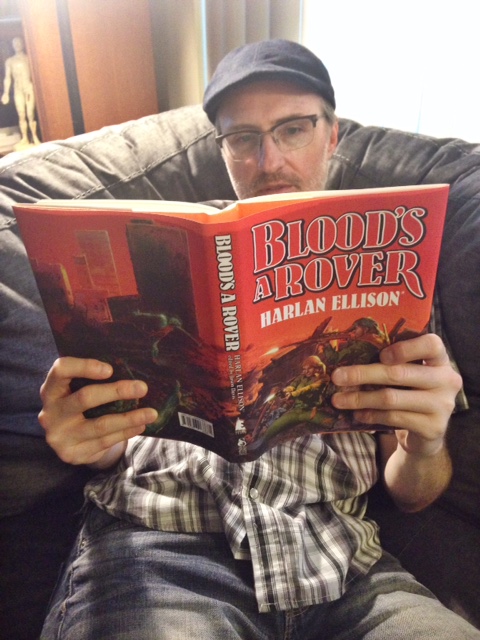