The Assassination of RFK


"Just before Christmas, Robert F. Kennedy Jr. pulled up to the massive Richard J. Donovan Correctional Facility, a California state prison complex in the desert outside San Diego that holds nearly 4,000 inmates. Kennedy was there to visit Sirhan B. Sirhan, the man convicted of killing his father, Sen. Robert F. Kennedy, nearly 50 years ago.
"While his wife, the actress Cheryl Hines, waited in the car, Kennedy met with Sirhan for three hours, he revealed to The Washington Post last week. It was the culmination of months of research by Kennedy into the assassination, including speaking with witnesses and reading the autopsy and police reports.
"'I got to a place where I had to see Sirhan,' Kennedy said. He would not discuss the specifics of their conversation. But when it was over, Kennedy had joined those who believe there was a second gunman, and that it was not Sirhan who killed his father."
To read the entire article, click HERE.

After reading Jackman's article, listen to political researcher Mae Brussell analyze the "deep politics" of the RFK assassination in the following episodes of her radio show Dialogue: Conspiracy:


As I wrote in Chapter One of my first book, CRYPTOSCATOLOGY:  CONSPIRACY THEORY AS ART FORM:

"If one reads the 1978 book The Assassination of Robert F. Kennedy by William Turner and Jonn Christian, one will realize that Sirhan Sirhan could not have been responsible for any of the wounds suffered by Senator Kennedy that fateful summer night in 1968.  This is a classic in its field, written by an FBI agent and a professional newsman, and deserves to be more widely known among those interested in the hidden agendas guiding American history from behind the scenes.  The bullets that murdered John F. Kennedy’s younger brother did not come from Sirhan Sirhan’s gun; in fact, the probable identity of the real gunman can be found within the pages of this very  book.  No 'theory' here, just facts."

Copies of The Assassination of Robert F. Kennedy are available HERE. 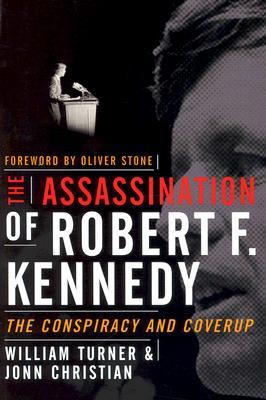