I recently visited my close friend, Count Dracula, and told him that I had just published a nonfiction book entitled BELA LUGOSI AND THE MONOGRAM NINE (coauthored with Gary D. Rhodes).

After I gave him a copy of the book, Dracula said, "Ah, it's wonderful to see my old friend Bela receiving some much deserved publicity!"

I replied, "You know... some Dracula fans believe that Christopher Lee played you better. What do you think?"

The Count waved his hand dismissively and said, "No one could wear a dinner suit like Bela!"

"Oh, yes. At one time we were quite close. I first met him in 1926 when I was preying on helpless young waifs in the Hungarian community in New York. I saw Bela performing dinner theater in a quaint, out-of-the-way cafe in Greenwich Village. Ah, yes! He made an excellent Cyrano! Fine comedic timing. I was the one who suggested he portray Yours Truly. I showed him all my best moves. He was a quick learner."

"Do you want to say something briefly about the nine films Bela made for Monogram Studios in the 1940s, the subject of our new book?"

"I had fallen out of touch with Bela by that time, but of course I saw all of those films when they premiered. Well, except for those two Bowery Boys films. For some reason those didn't play in Louisiana, where I was living at that time. My favorite was THE APE MAN. I needn't tell you, my friend, that THE APE MAN was a weird fucking film, was it not?"

"Yes, of course. That might be my favorite too. I devoted a very long chapter to that particular movie in this new book."

"I should watch it again. Maybe this time I'll even understand the damn thing. Anyway, I'll endeavor to read your new book. Reading helps me not fall asleep at night. Now stand back as I transform into an immense hookworm!"

He leaned in close and whispered, "Bats, wolves, dogs... I've never been able to figure them out. They're way too complicated."

"Before you leave, can you pose for a picture with me?"

He sighed. "Oh, all right, but then I must go immediately! I have pressing matters awaiting me at my castle. Tending to the needs of my pet armadillo, Tony, must outweigh your petty concerns for publicity!"

So we snapped a few photos, and then I watched the Count squirm off into the distance. It was an exhilarating evening all around, as you can well imagine. 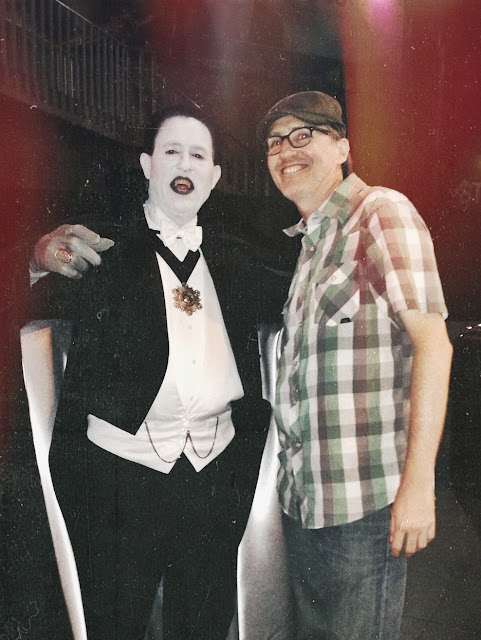 If you'd like to read the same book that Count Dracula will soon be perusing in his coffin, then please feel free to order your copy of BELA LUGOSI AND THE MONOGRAM NINE from Amazon right HERE. 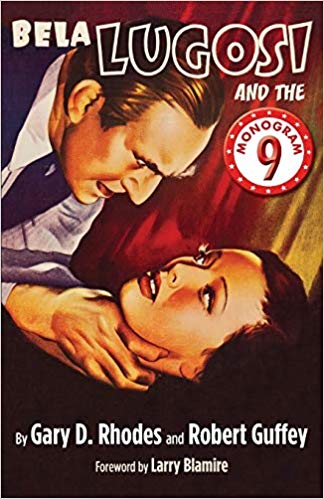