It is the great white whale of science fiction: an anthology of stories by some of the genre’s greatest names, collected in the early 1970s by Harlan Ellison yet mysteriously never published. But almost 50 years after it was first announced, The Last Dangerous Visions is finally set to see the light of day.

The late Ellison changed the face of sci-fi with the publication of anthologies Dangerous Visions and Again, Dangerous Visions, in 1968 and 1972, which featured writing by the likes of Philip K Dick, JG Ballard, Kurt Vonnegut and Ursula K Le Guin. Ellison, who was known for his combative nature – JG Ballard called him “an aggressive and restless extrovert who conducts life at a shout and his fiction at a scream” – announced a third volume, The Last Dangerous Visions, would be published in 1974. Contributors were said to include major names such as Frank Herbert, Anne McCaffrey, Octavia Butler and Daniel Keyes.

But the work never appeared, and in the words of the Encyclopedia of Science Fiction, it “became legendary for its many postponements”. The encyclopedia notes that “a series of illnesses certainly impaired Ellison’s fitness for the huge task of annotating what had soon become an enormous project”; in their study of Ellison, The Edge of Forever, Ellen Weil and Gary K Wolfe say the anthology ran to over a million words. 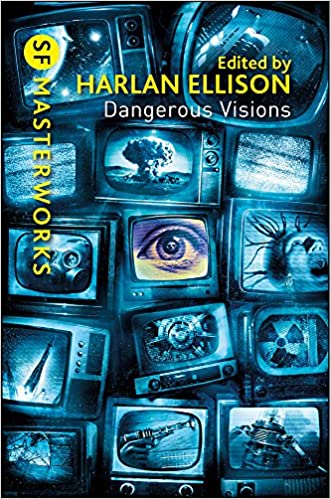