The Men Who Killed Kennedy: The Suppressed Episodes

Today, on the 50th anniversary of John F. Kennedy's bloody death in the streets of Dallas, one is certain to be overwhelmed by a plethora of misinformation and disinformation clogging the airwaves and the blogosphere.  This, therefore, would be the ideal time to watch the suppressed episodes of The Men Who Killed Kennedy, Nigel Turner's excellent nine-part documentary about the complex web of global events that led to the assassination.  Almost ten years ago, in April of 2004, the History Channel not only withdrew Episodes 7, 8 and 9 from circulation, but went so far as to apologize for airing them in the first place.  The network did this after being threatened with legal action from the surviving family of President Lyndon B. Johnson.

Thanks to a miracle called YouTube, however, all three of these banned episodes are now available to be seen again.  I highly recommend watching all nine parts of The Men Who Killed Kennedy, but the following trilogy of suppressed episodes are undoubtedly the best and most dangerous of all.

"Episode 7:  The Smoking Guns" can be seen HERE.

"Episode 8:  The Love Affair" can be seen HERE.

If you only have time to watch one, I highly recommend "The Guilty Men."  This was the episode that so enraged the likes of Jimmy Carter, Gerald Ford, Lady Bird Johnson, Bill Moyers, and Jack Valenti, all of whom did their utmost to sweep the evidence in this documentary not only into the trash bin of the History Channel... but into the trash bin of history itself. 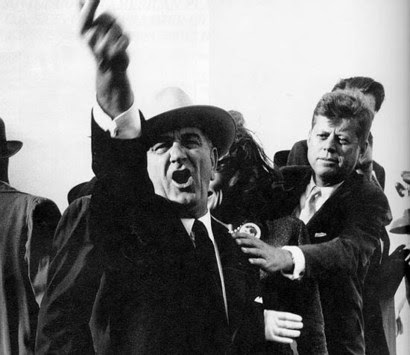