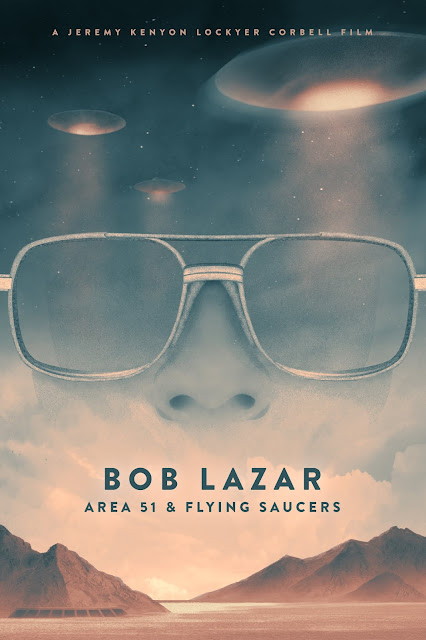 From Amy Zimmerman's 12-4-18 Daily Beast article entitled "Why Did the FBI Raid the Home of the Biggest Alien Truther?":


[Jeremy Corbell’s new documentary] Bob Lazar: Area 51 and Flying Saucers follows Lazar through domestic scenes and films him at work, puttering around with beakers and pipettes. These everyday images are seemingly incompatible with the interviews that Corbell is conducting throughout, as Lazar calmly answers questions about the alien technology he claims to have worked with. Lazar’s main gripes with the United States government are consistent with the concerns he shared decades ago: that people are not just being robbed of the truth about extraterrestrial life, but of awesome technology that has the power to shift “the entire world economy.”
Specifically, Lazar recalls technology that produces and controls gravity, and uses it for propulsion. He explains that “this is a reaction-less craft.” Instead of expelling something, like air or exhaust, “It creates a distortion in space and time in front of it, where space actually bends.” At multiple points in the documentary, Lazar stresses that this technology could not possibly have been human-made. “There’s another civilization in existence that’s intelligent that we know about, and we actually have artifacts from them,” he insists. “The science and the technology can change us dramatically.”
Naturally, Lazar’s story was highly contested at the time. Most notably, reporters were unable to verify that he attended Cal Tech and MIT as he claimed. Los Alamos denied his testimony that he worked there, but his name was found listed in a 1982 phone book for the lab “among the other scientists,” and a 1982 clipping from the Los Alamos newspaper described him as “a physicist at the Los Alamos Meson Physics Facility.” Officials at Los Alamos insisted that they had “no records at all” of Lazar. “It’s as if someone made him disappear,” an old news clip intones [...].
Over the course of the film, [investigative journalist George] Knapp makes a number of convincing arguments for his continued faith in Lazar. At one point, he stresses, “We checked out so many details that Bob had told us that turned out to be true.” Bob Lazar: Area 51 and Flying Saucers is strongest when it takes up this mantle of investigative reporting, like when Corbell tracks down the man who Lazar says did his background check to confirm his story.
To read Zimmerman's entire article, click HERE.

The official trailer for Bob Lazar:  Area 51 and Flying Saucers can be seen below....

Posted by Robert Guffey at 9:11 AM