The War Against the Imagination Heats Up!

As the systematic War Against the Imagination--an increasingly destructive cold war I've written about in such previous posts as "THE WAR AGAINST THE IMAGINATION" and "THE WAR AGAINST THE IMAGINATION CONTINUES"--heats up further, expect to see more editorials popping up in mainstream publications that enthusiastically advocate the gradual rollback of the First Amendment. Case in point: This 10-4-19 New York Times Op-Ed piece (unironically titled "Free Speech Is Killing Us"), which argues against "unchecked" speech, a barely disguised euphemism for the New York Times' actual agenda. In this piece, New Yorker staff writer Andrew Marantz advocates the strategic use of "carrots" to combat what he refers to as First-Amendment-induced "paralysis."


You can't make this stuff up, folks!
Here's a brief excerpt....
"I am not calling for repealing the First Amendment, or even for banning speech I find offensive on private platforms. What I’m arguing against is paralysis. We can protect unpopular speech from government interference while also admitting that unchecked speech can expose us to real risks. And we can take steps to mitigate those risks.
"The Constitution prevents the government from using sticks, but it says nothing about carrots."

If you want to read the entire piece, click HERE.

And if you don't want to read it, why not take this opportunity to instead check out Bob Burden's FLAMING CARROT comic book, which was recently re-released in a handsome omnibus edition courtesy of Dark Horse Comics? A tenuous link? Perhaps. But let's keep in mind that real carrots don't support censorship in any form (even when it's politely referred to as "checking" free speech)! 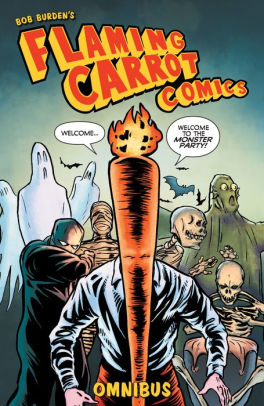 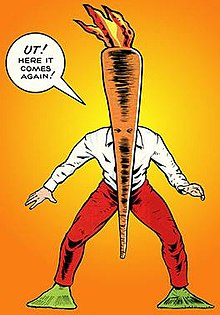