I'm very proud to announce that my second novel, BELA LUGOSI'S DEAD (a dark fantasy set in Los Angeles during the late 1980s), will be published by Crossroad Press on April 6, 2021. Here's the pitch:

It’s the late 1980s, and Michael Fenton, editor of Ramboona (a magazine dedicated to forgotten films), is attempting to track down the lost test footage from the 1931 Frankenstein produced by Universal Studios. It’s the holy grail of horror film aficionados: the twenty-minute reel in which Bela Lugosi portrays Frankenstein’s Monster instead of Boris Karloff, who would go on to make cinematic history with his portrayal of Mary Shelley’s creation. In his attempt to locate this fifty-year-old film canister, Mike is led down a labyrinth of blind alleys amidst the topsy-turvy wonderland of Los Angeles and environs.When we first encounter Mike, he’s making a pilgrimage to Lugosi’s final resting place at Holy Cross Cemetery. This is where he meets Lucy Szilagyi, a struggling young actress who happens to be visiting Sharon Tate’s grave (located only a few tombstones away from Lugosi’s). Lucy, a film buff herself, joins Mike in his quixotic search, helping him track down such curious, real-life characters as Maila Nurmi (an out-of-work actress known more famously as “Vampira”), Bela Lugosi, Jr., science fiction novelist Curt Siodmak, and Manly P. Hall (master hypnotist, mystic, Lugosi confidant, and author of a strange occult encyclopedia entitled The Secret Teachings of All Ages). All of these individuals have valuable pieces of information that could lead Mike to the hidden location of the lost test reel. Lugosi’s grave is also where Mike encounters a mysterious old man who promises him the footage he so desperately desires. But the man offers the item only at a most unusual price….Bela Lugosi’s Dead is one-third detective story, one-third Hollywood ghost story, and one-third pulp adventure tale….

"In Robert Guffey's latest and greatest novel, dreams of old movies and nightmares of classic horror rack into sharp focus through the lens of a brave film historian, one determined to squint clearly at fleeting grains of film through the shifting sands of time. Never has the truth of Hollywood been so well revealed through fiction. As a result, Bela Lugosi's Dead delightfully and definitively proves that Bela Lugosi isn't dead."
--Gary D. Rhodes, author of LUGOSI and TOD BROWNING'S DRACULA

You can pre-order the book right HERE. 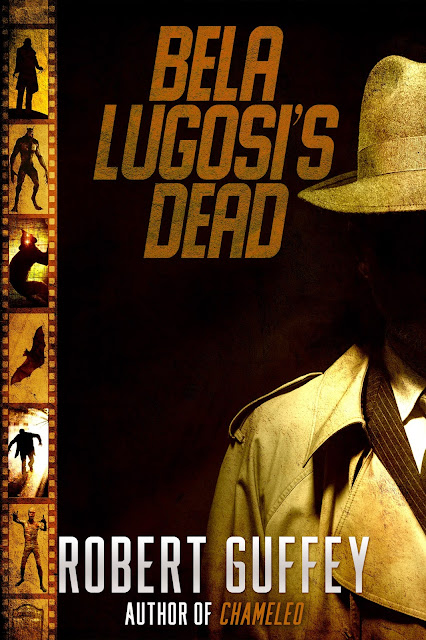 Posted by Robert Guffey at 1:31 PM