On July 20, 2021, investigative journalist Julie K. Brown appeared on NPR's FRESH AIR to discuss her new book, PERVERSION OF JUSTICE: THE JEFFREY EPSTEIN STORY. If you want to listen to the entire interview, click HERE. 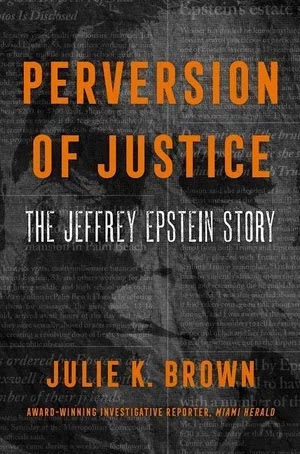 What follows is a brief excerpt from Dave Davies' 7-20-21 NPR report entitled "Everyone Heard About Jeffrey Epstein's Enablers. Few Listened To His Victims":

When wealthy financier Jeffrey Epstein was arrested in 2006 following an investigation into his sexual activities with teenage girls, the case ended in a lenient plea bargain in which Epstein served 13 months in a county jail.

Brown pored over records of the original police investigation and talked to detectives who had developed evidence against Epstein. She also identified 80 survivors, many of whom allege repeated abuse as adolescents in Epstein's Palm Beach, Fla., mansion.

"That's the one thing that I found that was missing in the [original] story, that none of the women's voices were in any of the stories that I read," Brown says. "There is nothing that was more powerful than the words of the women talking about this themselves. And I still kind of get choked up when I think about how brave they were to [speak out]."

Brown's 2018 series for the Herald generated national attention and led to the resignation of Labor Secretary Alexander Acosta, who had approved the earlier plea bargain as a U.S. attorney. It also spurred an investigation that put Epstein behind bars on new federal charges. A month after that arrest, Epstein died by asphyxiation in his cell. Though New York City's chief medical examiner declared it a suicide, Epstein's death continues to inspire conspiracy theories.

Brown revisits the case and her two-year investigation into Epstein in the new book Perversion of Justice.

"In this book, I lay out more about the scope and the breadth of the story so that readers can see the patterns in the whole picture of how Epstein's web of enablers helped him," she says. "He didn't do this alone. He had a whole ecosystem that he created that allowed this to happen."
Posted by Robert Guffey at 1:00 AM