From Laura Italiano's 7-1-22 BUSINESS INSIDER article entitled "Oath Keepers Will Tell a Jury They Believed Donald Trump Would Turn Them Into His Own Personal Militia on January 6":

When nine accused leaders of the Oath Keepers go on trial this fall to face seditious conspiracy charges for their role in the January 6, 2021, Capitol riot, jurors in the government's first big, showcase trial will hear a defense argument that will sound outlandish to many.

Jurors will be told that the far-right extremists believed President Donald Trump would invoke the Insurrection Act as they gathered at the Capitol — 100 strong in their camo-colored tactical gear — and turn them into his own, ultra-loyal federal militia [...].

James Lee Bright, a lawyer for Rhodes, acknowledged that most people will be shocked to learn the Oath Keepers thought they'd become a federal militia. "They believe what?" Bright imagined people thinking. "These guys are fucking crazy."

He nonetheless hopes to convince jurors that the pro-Trump, anti-government group had two lawful — and non-seditious — reasons to be at the Capitol on January 6.

Reason one: They were an invited security force for rally planners and participants, including Roger Stone, Ali Alexander, Latinos for Trump, and Virginia Women for Trump.

"While I understand where they got the idea from, what they're saying is mostly nonsense," Joseph Nunn, an attorney for the Brennan Center for Justice at New York University's law school, said [...].

"[I]t's just not plausible," [Nunn] said. For one, there's no framework for it. Would a federalized Oath Keepers militia be subject to the Uniform Code of Military Justice? Could they be court-martialed?

And ultimately, as desperate as he was to stay in power, Trump didn't go there, most likely because "there were some people in his ear, explaining to him that he couldn't do things," Nunn said.

VICE: "Q Is Back and It’s Tearing the QAnon World Apart"

What follow are brief excerpts from David Gilbert's 6-30-22 VICE article entitled "Q Is Back and It’s Tearing the QAnon World Apart":

[O]utside of this small circle of believers, the wider QAnon community is still celebrating the return of Q, oblivious to the fact that the new Q drops appear to be written not by a secret military intelligence insider, but by a 58-year-old pig farmer who’s obsessed with fountain pens.

The first new post since Dec. 8, 2020, was posted on Friday, posing the cryptic question: “Shall we play a game once more?”

Several more posts followed soon after, but members of the qresearch board quickly realized something was off [...].

[Jim] Watkins also claimed that his son, Ron Watkins, who is currently running for Congress in Arizona, had created many special secret tools that would explain all the strange errors that appeared in recent days.

[Fred] Brennan believes Jim Watkins is posting the latest updates because he doesn’t think Ron, who was the site’s administrator until November 2020, would have made those errors.

The hamfisted attempts to claim that the new posts came from Q, and Watkins’ effort to explain away those mistakes, have been blasted by many on the qresearch board, with one member writing on Wednesday the new drops were “a fraud, like everything the Watkins are connected to.”

Brennan says that such backlash is almost unprecedented, and that he’s never seen this sort of internal dissent on 8kun.

And yet, despite all the evidence suggesting the new Q drops were not real, or were at the very least facilitated by Watkins and his team, the wider QAnon community continues to celebrate Q’s return....

On an even more bemusing note, I recommend watching this DAILY SHOW excerpt in which Jordan Klepper confronts various Qheads outside a recent Trump rally in Mississippi (posted on 6-23-22):

Roy Christopher, author of DEAD PRECEDENTS: HOW HIP-HOP DEFINES THE FUTURE and ESCAPE VELOCITY, writes about OPERATION MINDFUCK and Mike Rothschild's THE STORM IS UPON US in his latest article, "Flowers for QAnon":

Whether QAnon is a religion, a cult, a joke, a political movement, or just an online game gone awry, Robert Guffey‘s Operation Mindfuck: QAnon and the Cult of Donald Trump (O/R Books, 2022) is his attempt to figure it all out. Guffey’s pedigree in this area is unmatched. His first book, Cryptoscatology: Conspiracy Theory as Art Form (Trine Day, 2012), explores every conspiracy theory out there. Here’s a prescient line from Cryptoscatology: “In the modern day digital environment truth is as malleable as viscous liquid. You can’t make up anything that won’t come true a few minutes later.” Ever since Q emerged online in 2017, he’s been trying to figure out the appeal, the movement, and its meaning. His efforts are all chronicled in Operation Mindfuck.

Where cognitive dissonance is the default state of mind, QAnons’ frequent refrain of “Do your own research!” echoes that of Behold a Pale Horse author William Cooper. Cooper was viewed as a “P.T. Barnum-style huckster” in UFOlogy and conspiracy circles alike. Guffey quips, “Compared to QAnon, William Cooper was Buckminster Fuller.” (p. 29) Tarpley Hitt writes in The Daily Beast, “There’s an aspect of QAnon obsession that resembles demented literary criticism: every current event encoded with hidden meanings, global criminals desperate to signal their crimes through symbols, millions of messages waiting for the right close reader to unpack them.”

Another problem is that there are coded messages in the QAnon mythos. Figuring out which ones are messages and which ones are just junk is open to interpretation. Throughout Operation Mindfuck, Guffey follows Theodore Sturgeon’s advice he quoted in his book Chameleo (O/R Books, 2015): “Always ask the next question.”

Posted by Robert Guffey at 7:33 PM No comments:

Poet Steve Henn (author of AND GOD SAID LET THERE BE EVOLUTION) just published a laudatory review of my latest book, OPERATION MINDFUCK: QANON & THE CULT OF DONALD TRUMP. Here's an excerpt:

Operation Mindfuck: QAnon & the Cult of Donald Trump by Robert Guffey tackles the conspiracy theories Q draws from, the history of the Q phenomenon, and the eventual attempts by mobs at least partially influenced by Q, and certainly influenced by Donald Trump, to overturn the 2020 Presidential election. The book is well-researched, with a full Bibliography of notes that reference and identify each quote from each source that Guffey cites. Guffey, additionally, has a long background studying conspiracy theories and their origins.

Not with innuendo, but with clear reference to documented text and speech, Guffey tells us the origin of various elements of the Q conspiracy, which is a pastiche that draws in so many people in part, Guffey says, because it has so many different sides and supposed connections to current events that a Q enthusiast can pick and choose whatever elements of Q they are most attracted to. Guffey points, for example, to the Satanic panic of the 1980s as a touchstone of the hysteria over supposed Satan worshipping elites in entertainment and politics. But he goes as far back as the 19th century, noting a satire of the Freemasons that later was perverted into political propaganda by the original Nazis, and that has hung around on the fringes where “the real story of what’s happening in the world” has maintained a presence ever since.

In other words, Guffey is not a lightweight. He knows how to write a real book.

I am avoiding cherry-picking a lot of specifics from Guffey’s book, in part because part of the pleasure of reading it comes from learning the various threads of conspiracy and their connection to the current political situation that he lays out in cogent and, mostly, un-hyperbolic prose, but also in part because I don’t want any readers who may be followers of Q to get bogged down in protesting this or that detail. Guffey’s “big picture” is much, much more cogent and plausible than Q’s.... 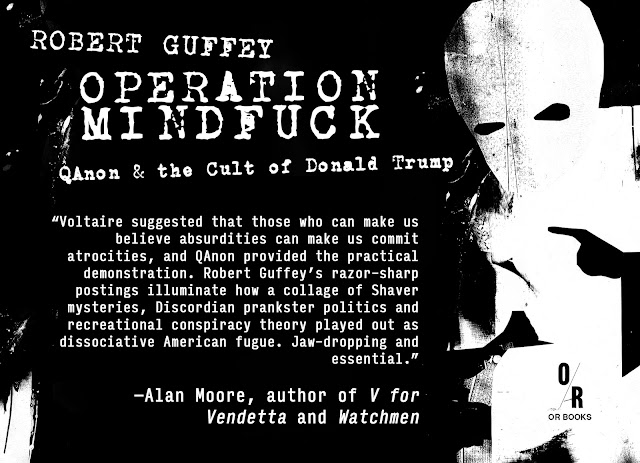 Let’s recap what we’ve learned in the past hour.

To read this and related reports about the January 6th hearings, click HERE.

From Alyssa Guzman's 6-18-22 DAILY MAIL article entitled "Bill Clinton Admits He Sent Federal Agents to Find Out Whether There Were Aliens at Nevada's Area 51 and 'Made Every Attempt to Find Out Everything About Roswell' During His Presidency":

Former President Bill Clinton told James Cordon he sent federal agents to Area 51 to find out if aliens were hiding there.

Clinton, 75, joined Cordon, 43, on his show on Wednesday evening, revealing he and his former Chief of Staff John Podesta, sent a team to the classified military base.

'When I was president, and I had a Chief of Staff John Podesta - he loved science fiction - he made every attempt to find out everything about Roswell. And we also sent people to Area 51, we wanted to make sure there were no aliens.'

When Cordon excitedly asked the former president who exactly he sent to the coveted area, he grabbed the late-night host's shoulder and said: 'Oh, if I told you that.'

However, Clinton ended up revealing that, while the alien hunt was a disappointment, the base was used as a research and test ground for stealth aircraft.

'I got to find out how we're going to deal with this, because [Area 51] is where we do a lot our invisibility research in terms of technology, like how do we fly airplanes that aren't pick up by radar and all that,' he said. 'So that's why they're so secretive.'

President Bill Clinton on the Clinton Global Initiative and Aliens:

Posted by Robert Guffey at 1:23 PM No comments:

While convicted sex trafficker Ghislaine Maxwell was locked up in a federal prison in Brooklyn, her cellmate reportedly planned to kill her. The shocking claim was made in legal filings by Maxwell's lawyers asking for leniency ahead of her June 28 sentencing.

The legal filing says that the unidentified inmate told at least three other inmates that she was going to strangle Maxwell in her sleep in exchange for money.

"One of the female inmates in Ms. Maxwell's housing unit told at least three other inmates that she had been offered money to murder Ms. Maxwell and that she planned to strangle her in her sleep," the filing states.

Posted by Robert Guffey at 11:23 PM No comments: