We now hop into our cryptoscatological time machine and travel back to that infamous year of 1941 in order to witness William Seabrook, author of the groundbreaking 1929 book THE MAGIC ISLAND [a travelogue about Haiti upon which the 1932 Bela Lugosi film, WHITE ZOMBIE (the very first zombie flick), was unofficially based], attempting to cast a hex on none other than Adolf Hitler himself!  Simply click HERE to see the anti-Nazi ritual in action.... 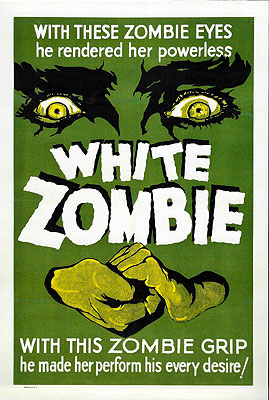 Posted by Robert Guffey at 5:14 PM No comments:

From Jillian Steinhauer’s 7-9-14 article “The CIA and the Power of Words”:

“Like any proper organization that produces large quantities of writing, the CIA, it turns out, has a style manual. The legal nonprofit National Security Counselors obtained a copy of the 2011 version a little over a year ago, via a Freedom of Information Act request, and posted it online. (Quartz blogged about it yesterday.) It is an absurdly thorough, mundane yet fascinating look at the politics of language.

“The 2011 Style Manual & Writers Guide for Intelligence Publications runs nearly 200 pages. It covers everything you’d expect from a guide of its kind: capitalization, numbers, compound words, modifiers. In some ways, it’s a completely unexceptional document.
“Yet, as you page through, little things start to emerge […].”
To read the entirety of Steinhauer's “The CIA and the Power of Words,” click HERE.

Posted by Robert Guffey at 12:04 AM No comments:

The Downing of Flight 17


"A top pro-Russia rebel commander in eastern Ukraine has given a bizarre version of events surrounding the Malaysian jetliner crash — suggesting many of the victims may have died days before the plane took off.
"The pro-rebel website Russkaya Vesna on Friday quoted Igor Girkin as saying he was told by people at the crash site that 'a significant number of the bodies weren't fresh,' adding that he was told they were drained of blood and reeked of decomposition.
"The Malaysia Airlines Boeing-777 was shot down Thursday, killing all 298 people aboard. The plane was flying 10,000 meters above an area where Ukrainian forces have been fighting separatist rebels. Each side accuses the other of downing the plane."
To read the entire abcnews.com article, click HERE.

It's worth noting that, just like the still missing Flight 370, the Boeing-777 shot down over Ukraine was filled with research scientists, as reported in this 7-18-14 Haaretz article entitled "Over 100 AIDS Specialists Were on Plane Shot Down Over Ukraine":


"As world leaders demand an international investigation into the shooting down of a Malaysian jetliner on Thursday, it has emerged that more than 100 international AIDS researchers, activists and health workers may have been among the passengers of the plane.
"The AIDS activists were delegates to the 20th International AIDS Conference, which is due to open on Sunday in Melbourne, Australia, according to a report in USA Today [...].
"There's been confirmed a number of senior people who were coming out here who were researchers, who were medical scientists, doctors, people who've been to the forefront of dealing with AIDS across the world," Victoria Premier Denis Napthine told reporters in Melbourne on Friday. "The exact number is not yet known, but there is no doubt it's a substantial number."
To read the entire Haaretz article, click HERE.
For related Cryptoscatology posts, click HERE ("Flight 370 and Electronic Warfare") and HERE  ("The Disappearance of Flight 370").
It could be propitious at this time to read Sherman Skolnick's classic 1973 article "The Secret History of Airplane Sabotage."  To do so, simply click HERE.
Posted by Robert Guffey at 12:57 AM No comments:

Yet Another Banker Suicide

"JP Morgan executive director Julian Knott blasted his wife Alita to death with a shotgun before turning the gun on himself.
"The 45-year-old, who worked for the investment bank in London until July 2010, shot his 47-year-old wife multiple times before committing suicide with the same weapon.
"The couple met in London, with Alita opening nursery Quayside Tots Playgroup in Southwick, West Sussex, before they moved to the United States.
"She remained the playgroup's care provider until at least February 2013, according to the nursery's most recent Ofsted report.
"Julian moved to the United States from London in 2010 and was working at JP Morgan's Global Network Operations Center in Whippany, New Jersey, at the time of the tragedy."
To read the rest of Lewis Dean's article, click HERE.
According to Dean, this is the eighth banker suicide during the past year; however, according to a related article (which can be found by clicking HERE), it's actually the fifteenth.

For an earlier Cryptoscatology post about this recent spate of banker suicides, click HERE.
Posted by Robert Guffey at 9:13 PM No comments:

Order of the Bees

"Members of terror group Boko Haram have allegedly been arrested in Nigeria after fleeing a forest to escape deadly bites from 'mystical bees' and 'mysterious snakes.'
According to Nigerian newspaper Vanguard, the captured insurgents claimed the creatures -- possessed by ghosts -- had killed many Boko Haram members.
"'We were told that the aggrieved people who had suffered from our deadly mission -- including the ghosts of some of those we killed -- are the ones turning into the snake and bees,' one militant told Vanguard. 'Our leaders fled, too.'
"Boko Haram made headlines worldwide for the kidnappings of 220 schoolgirls in Chibok, Borno State, last April."
To read the entire International Business Times article, click HERE.
The original Vanguard article can be found HERE.

The Strategy of Tension Is Growing More Tense

The basic nova mechanism is very simple:  Always create as many insoluble conflicts as possible and always aggravate existing conflicts—[...]  Like this:  Take two opposed pressure groups—Record the most violent and threatening statements of group one with regard to group two and play back to group two—Record the answer and take it back to group one—Back and forth between opposed pressure groups—This process is known as “feed back”—You can see it operating in any bar room quarrel—In any quarrel for that matter—Manipulated on a global scale feeds back nuclear war and nova—These conflicts are deliberately created and aggravated by nova criminals—  […]  In all my experience as a police officer I have never seen such total fear and degradation on any planet—We intend to arrest these criminals and turn them over to the Biological Department for the indicated alterations—  (Three Novels 235-36)

Burroughs is describing a "strategy of tension" that's still at work today, perhaps even more so than in 1964.  A prime example is playing out across the national stage even as I write this.  Always take note of which stories dominate the new cycle, and how the juxtaposition of these stories are intended to bring about a very specific effect in the mass mind.  The process is as simple as making an omelet.  Place story A next to story B (needless to say, story A and story B never appear to be connected, at least not on the surface), then just sit back and watch the hatred and chaos spread out across the bloody landscape as a result.  The participants in this chaos will believe that their actions are completely voluntary and spontaneous, but they will always be quite wrong.

"It has been six weeks since the city turned off Nicole Hill's water.
"Dirty dishes are piled in the sink of her crowded kitchen, where the yellow-and-green linoleum floor is soiled and sticky.  A small garbage can is filled with water from a neighbor, while a bigger one sits outside in the yard, where she hopes it will collect some rain.  She's developed an intricate recycling system of washing the dishes, cleaning the floor and flushing the toilet with the same water.
"'It's frightening, because you think this is something that only happens somewhere like Africa,' said Hill, a single mother who is studying homeland security at a local college. 'But now I know what they're going through — when I get somewhere there's a water faucet, I drink until my stomach hurts.'


"Hill is one of thousands of residents in Detroit who have had their water and sewer services turned off as part of a crackdown on customers who are behind on their bills.  In April, the city set a target of cutting service to 3,000 customers a week who were more than $150 behind on their bills.  In May, the water department sent out 46,000 warnings and cut off service to 4,531.   The city says that cutting off water is the only way to get people to pay their bills as Detroit tries to emerge from bankruptcy — the utility is currently owed $90 million from customers, and nearly half the city's 300,000 or so accounts are past due.
"But cutting off water to people already living in poverty came under criticism last week from the United Nations Office of the High Commissioner for Human Rights, whose experts said that Detroit was violating international standards by cutting off access to water."

Here's an excerpt from Sara Carter's 6-24-14 The Blaze article entitled "'Potential for a Public Health Disaster':  Illegal Immigrant Surge Leaves Officials with 'No Idea' Which Diseases Are Coming Across":

"The [illegal immigrant] families had traveled from Honduras, Guatemala and El Salvador to reach U.S. federal law enforcement at Anzalduas Park, on the banks of the Rio Grande.  Agents there have been overwhelmed with the surge of illegal crossers over the past several months.  Border Patrol officials — who were armed with more bottles of water than weapons [I took the liberty of adding the emphasis here, as this otherwise insignificant detail about border agents giving water to illegal aliens has been repeated in almost every single print, radio, television and Internet story regarding this unfolding situation] — would soon send [the] group [of refugees] to join the 1,000 or so others at the temporary immigrant holding facility in nearby McAllen."

You can read Carter's entire article by clicking HERE.

Now, when you put STORY A and STORY B together, what do you get?  Our old friends Xenophobia and Nationalism, of course....


"America's border crisis reached Main Street, as flag-waving protesters in a San Diego suburb turned back three busloads of illegal immigrants after the town's mayor warned Tuesday that federal officials were using the community as a safety valve for facilities swamped by a tide of Central American refugees.
"Fears of disease, crime and already-strained government services prompted Murrieta, Calif., Mayor Alan Long to rally residents against plans by the Department of Homeland Security to bus the children and families to a processing center in the city of 106,000 residents. Confronted by the protests, the buses were rerouted to San Diego […].
The three buses were trailed by a half-dozen news crews during the two-hour trip from the border to Murietta.  After the buses were blocked, federal authorities rerouted the vehicles to a freeway and then to a customs and border facility in San Diego within view of the Mexico border.
Many protesters at Tuesday's event held U.S. flags, while others held signs reading "stop illegal immigration," and "illegals out!"
"We can't start taking care of others if we can't take care of our own," protester Nancy Greyson, 60, of Murrieta, told the Desert Sun newspaper.
To read La Jeunesse's entire article, click HERE.

We'll end this installment with these wise words....

"Control is controlled by its need to control."--William S. Burroughs, Dead City Radio, 1990
Posted by Robert Guffey at 10:51 PM No comments: