"At first glance, the thumbnail-size grids of 256 minuscule black squares seem to have nothing to do with the octopus, squid and cuttlefish that inspired them. But these hi-tech microconstructions of polymers, semiconductors, light sensors and heating elements are what you get when scientists attempt to replicate the camouflaging ability of the animal world.
"One of the goals of the scientists’ work, which explains the US navy’s financial support of the project, is to invent synthetic skins that can recast their textures, colours and patterns to match their surroundings – match them well enough that the skins and what’s underneath them essentially disappear.
"For millions of years, hiding has been a primary means of survival for soft and often defenceless cephalopods. Engineers can learn a lot from these masters of deception.
“'The power of evolution is spectacular,' says John Rogers, a materials scientist at the University of Illinois at Urbana-Champaign who is part of a multi-institutional team developing hi-tech camouflage. 'We are taking inspiration from nature to build devices that can respond and adapt to the lighting and coloration of whatever environment they are in.' The scientists envision paints and fabrics that can change their patterns swiftly, even entire naval vessels that can blend into their surroundings with octopus-inspired camo skins [...].

"Military applications will come first, but Rogers envisions a world with octopus camouflage ability all over it. 'This is a starting point,' he says. 'I am thinking about surfaces whose colours are programmable and adaptive to what is going on.' A textile artist at the Art Institute of Chicago interested in futuristic fabrics has been in touch, Rogers notes. He then ticks off a bunch of things — cars, toys, displays, even living room walls — that he imagines could be designed with astounding morphing surfaces, from smooth to bumpy or woven textured, like wicker."
To read Amato's entire article, click HERE. 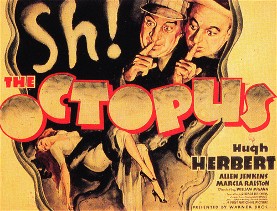 Posted by Robert Guffey at 8:16 PM No comments:

My third book, CHAMELEO:  A STRANGE BUT TRUE STORY OF INVISIBLE SPIES, HEROIN ADDICTION, AND HOMELAND SECURITY, is now available for pre-order!  It's scheduled to be published by OR Books in New York this coming February.  Feel free to spread the word! If you wish to pre-order CHAMELEO, simply click HERE.
Posted by Robert Guffey at 12:22 PM No comments:

"So before and during the Iraq War, the organization of antiwar rallies was regarded as a fit matter for police surveillance; so were the monthly Critical Mass bicycle rallies, as well as groups protesting at the Republican National Convention in 2004, and a range of Islamic facilities, from mosques to college student clubs. Undercover New York police officers showed up at activists’ meetings all over the country, carrying guitars and knapsacks […].
"The unrestrained surveillance in New York public life is the physical embodiment of what has been taking place online over the last decade under operations of the National Security Agency revealed by Edward J. Snowden. To borrow the title of a 1918 novel about nosy Irish villagers, we have become The Valley of the Squinting Windows […].
"One of the large, undiscussed questions of such surveillance is how civic dialogue can be influenced or distorted by police agents — perhaps as provocateurs, or possibly with no motive beyond maintaining cover. During the Republican convention, after a group making a film was arrested, a redheaded man standing on the street pounded on the back window of a police van, urging that the people inside be let go. A day later, the same man was videotaped being briefly put under a fake arrest, leading to tumult in the street from others who objected to his incarceration. They were unaware that the man was an undercover police officer who was walked down the street by uniformed officers, hands behind his back but uncuffed, and sent on his way: catch and release."
You can find the entire article by clicking HERE.
Posted by Robert Guffey at 10:43 AM No comments:

SPIES AND SAUCERS on ANCIENT OF DAYS

Earlier today Tessa B. Dick (wife of the late Philip K. Dick) interviewed me on her radio show, ANCIENT OF DAYS.  Over the course of an information-packed half hour we discuss my new book SPIES AND SAUCERS, Curt Siodmak, the , the CIA, CREATURE WITH THE ATOM BRAIN, THE GAMMA PEOPLE, secret mind control experiments, the dangers of communicating with dead celebrities, Philip K. Dick (naturally), and did I mention SPIES AND SAUCERS?  That interview can be heard by clicking right HERE.
Posted by Robert Guffey at 11:00 PM No comments:

Gary Webb and the CIA

Check out Andrei Burke's 10-3-14 article entitled "When the CIA Conspired to Kill Journalist Gary Webb."  Here are a few excerpts:

"The recent trove of documents that the CIA released under the Freedom of Information Act contained a six-page article titled 'Managing a Nightmare: CIA Public Affairs and the Drug Conspiracy Story' [written by Nicolas Dujmovic] that was published in the agency’s in-house newsletter Studies in Intelligence. The article is a detailed account of the initial impact and eventual aftermath of Pulitzer Prize-winning journalist Gary Webb’s groundbreaking 'Dark Alliance' series of reports, published in 1996 by the San Jose Mercury News. Webb’s series was an in depth investigation into the CIA’s implicit role in the explosion of crack cocaine in America’s urban centers, through Nicaragua’s Contra rebels, who were trafficking cocaine into the United States to fund their counter-revolutionary campaign […].

"The CIA closely observed these developments, and collaborated when and where it could with outlets challenging Webb’s story. In 'Managing a Nightmare,' Dujmovic boasted that the agency virtually abandoned its longstanding policies in order to discredit Webb and the series. 'For example, in order to help a journalist working on a story that would undermine the Mercury News allegations, Public Affairs was able to deny any affiliation of a particular individual—which is a rare exception to the general policy that CIA does not comment on any individual’s alleged CIA ties,' he wrote.
"[Ryan Devereaux of] The Intercept notes:
"[Dujmovic's 'Managing a Nightmare'] chronicles the shift in public opinion as it moved in favor of the CIA, a trend that began about a month and a half after the series was published. 'That third week in September was a turning point in media coverage of this story,' Dujmovic wrote, citing '[r]espected columnists, including prominent blacks,' along with the New York Daily News, the Baltimore Sun, The Weekly Standard and the Washington Post. The agency supplied the press, 'as well as former Agency officials, who were themselves representing the Agency in interviews with the media,' with 'these more balanced stories,' Dujmovic wrote. The Washington Post proved particularly useful. 'Because of the Post‘s national reputation, its articles especially were picked up by other papers, helping to create what the Associated Press called a "firestorm of reaction" against the San Jose Mercury News.' Over the month that followed, critical media coverage of the series ('balanced reporting') far outnumbered supportive stories, a trend the CIA credited to the Post, The New York Times, 'and especially the Los Angeles Times.' Webb’s editors began to distance themselves from their reporter.
"The CIA 'didn’t really need to lift a finger to try to ruin Gary Webb’s credibility,' said Webb biographer Nick Schou. 'They just sat there and watched these journalists go after Gary like a bunch of piranhas.'
"What was a minor victory for the CIA became a living hell for Webb. He was eventually removed from his position at the Mercury News, and ultimately took his own life […]."
To read Burke's entire article, click HERE.

Posted by Robert Guffey at 9:29 AM No comments:

The War on ISIS

I highly recommend reading Tory Newmeyer's 9-13-14 Fortune Magazine article entitled "The War on ISIS Already Has A Winner:  The Defense Industry."  Here are some choice excerpts:


"It’s far too soon to tell how the American escalation in the sprawling, complex mess unfolding in Iraq and Syria will play out. But this much is clear: As our military machine hums into a higher gear, it will produce some winners in the defense industry.
"New fights mean new stuff, after all. And following the U.S. withdrawal from Iraq and Afghanistan—and the belt-tightening at the Pentagon imposed by steep budget cuts—military suppliers are lining up to meet a suddenly restored need for their wares […].
"'The drone builders are going to have a field day,' says Dov Zakheim, who served as Pentagon Comptroller during the George W. Bush administration. That could mean a tidy profit for privately held General Atomics, maker of the Predator drone, the granddaddy in the category and still widely in use, as well as the second-generation Reaper, designed to carry 3,000 pounds worth of bombs. And to help survey vast expanses of desert, the military will rely on the Global Hawk, made by Northrop Grumman to hover at altitudes as high as 50,000 feet for up to four days at a time. Those vehicles will likely be making use of the Gorgon Stare. This sensor, developed by privately held Sierra Nevada, is capable of scoping a 4-kilometer diameter by filming with nine cameras […].
"It is the munitions makers, however, who stand to reap the biggest windfall, especially in the short term. Topping that list is Lockheed Martin, producer of the Hellfire missile, a precision weapon that can be launched from multiple platforms, including Predator drones. Raytheon, which makes the Tomahawk, a long-range missile launched from the sea, and General Dynamics, which also has a munitions business, are also well-positioned, analysts say."
To read Newmeyer's entire article, click HERE.
Posted by Robert Guffey at 4:18 PM No comments: