The Tampa Bay Times on Illegal Police Surveillance and Harassment

What follows is the beginning of a 9-3-20 TAMPA BAY TIMES article entitled "Targeted" by Kathleen McGrory and Neil Bedi:

Pasco County Sheriff Chris Nocco took office in 2011 with a bold plan: to create a cutting-edge intelligence program that could stop crime before it happened.
What he actually built was a system to continuously monitor and harass Pasco County residents, a Tampa Bay Times investigation has found.
First the Sheriff’s Office generates lists of people it considers likely to break the law, based on arrest histories, unspecified intelligence and arbitrary decisions by police analysts.
Then it sends deputies to find and interrogate anyone whose name appears, often without probable cause, a search warrant or evidence of a specific crime.
They swarm homes in the middle of the night, waking families and embarrassing people in front of their neighbors. They write tickets for missing mailbox numbers and overgrown grass, saddling residents with court dates and fines. They come again and again, making arrests for any reason they can.
One former deputy described the directive like this: “Make their lives miserable until they move or sue.”
In just five years, Nocco’s signature program has ensnared almost 1,000 people.
At least 1 in 10 were younger than 18, the Times found.

To read the entire article, click HERE.
Posted by Robert Guffey at 6:00 PM No comments:

"62 Cents" in THE MAILER REVIEW

THE MAILER REVIEW VOL. 13 was originally scheduled to be published last fall, but production delays prevented its release until now. The latest edition has at last been released and contains my short story "62 Cents." Also included in this issue is a contribution by the legendary Barry N. Malzberg (a nonfiction piece entitled "Sixty-seven Words a Minute"). This is the second time Malzberg and I have shared a Table of Contents page. The last time was in 2013 when Malzberg's story "The Rapture" and my story "Selections from The Expectant Mother Disinformation Handbook" both appeared in the same issue of the British magazine POSTSCRIPTS (issue #30/31). I was very pleased to discover that I would be appearing in the same journal as Malzberg at least one more time. As a teenager, when I was reading his book THE ENGINES OF THE NIGHT, I never thought we'd be in the same book together (much less twice).

Readers of my latest book, BELA LUGOSI AND THE MONOGRAM NINE, might be interested to know that my MONOGRAM NINE co-author, Gary D. Rhodes, has a grand total of four poems included in this same issue.

Click HERE to order a copy of THE MAILER REVIEW VOL. 13. 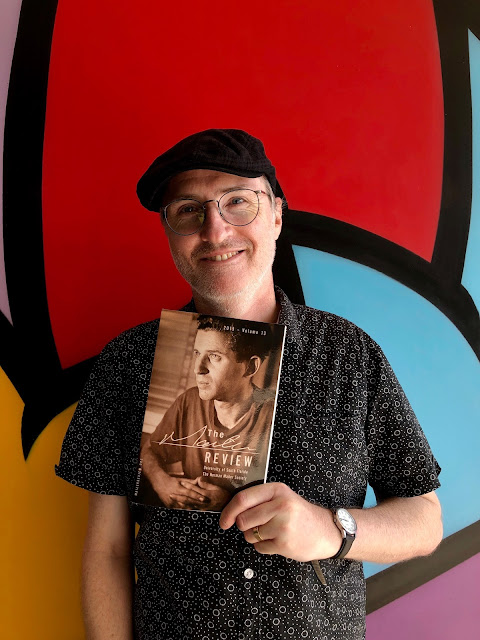 Posted by Robert Guffey at 1:00 AM No comments:

Donald Trump Saved Me from Being Eaten By Underground Demons! (Part 5)

SALON has now published the thrilling finale of my five-part QAnon exposé! In this installment, we conclude our analysis of the thinly-disguised QAnon recruitment video Out of Shadows (perhaps the most impactful propaganda film of the past few years), delve into the Jeffrey Epstein mystery, and explain why QAnon is the catfish scheme of all catfish schemes.

Click HERE for the exciting conclusion: "What Are the True Goals of QAnon? It's the 21st Century's Ultimate Catfish Scheme."

Posted by Robert Guffey at 11:33 AM No comments:

Donald Trump Saved Me from Being Eaten By Underground Demons! (Part 4)

Celebrate this Labor Day by heading on over to SALON and checking out the penultimate chapter of my serialized exposé about QAnon and their topsy-turvy, inside-out, backwards, crooked, mangled, weirdo-skeevo extremist religious beliefs.

In the previous three installments of this series, I chronicled the attempts made by an old friend to convince me of an outlandish conspiracy theory being promoted by the group of rabid online Trump supporters known as “QAnon.” According to my friend, initiates of the Illuminati had teamed up with subterranean demons to torture, rape and eat kidnapped children in underground military bases ruled by the mortal enemies of Donald Trump. He insisted that when Trump is re-elected in November we can all look forward to the abolition of the income tax, the development of “free energy” for all and the public unveiling of thousands of grateful kidnapped children rescued by Trump’s private army of “white hats” from cages squirreled away in these Satanist-controlled underground dungeons. One of the pieces of so-called “evidence” provided by my friend was a YouTube documentary called “Out of Shadows,” which took the internet by storm in April. Perhaps the most impactful propaganda film of the past few years, “Out of Shadows” is a thinly-disguised QAnon recruitment video that mixes small slices of truth with a whole lot of lies to confuse the viewer into believing various bizarre theories promoted by QAnon. In this next installment, we continue our analysis of “Out of Shadows” and take a deep dive into the embryonic or chrysalis form of QAnon known as Pizzagate. Click HERE to read "Decoding QAnon: From Pizzagate to Kanye to Marina Abramovic, This Conspiracy Covers Everything."
Posted by Robert Guffey at 11:04 AM No comments: