Donald Trump Saved Me from Being Eaten By Underground Demons! (Part 3)

SALON has just published Chapter Three of my multipart exposé about the true origins of QAnon: "Making Sense of QAnon: What Lies Behind the Conspiracy Theory That's Eating America?" In the previous two installments of this series, I chronicled the attempts made by an old friend to convince me of an outlandish conspiracy theory being promoted by the group of rabid online Donald Trump supporters known as “QAnon.” According to my friend, initiates of the Illuminati had teamed up with subterranean demons to torture, rape and eat kidnapped children in underground military bases ruled by Trump’s mortal enemies. Not surprisingly, none of the so-called “evidence” provided by my friend proved any such thing.

In the first two installments we suggested a few notable precedents for the core ideas of the QAnon cult. Now, in Chapter Three, prepare to take a deep dive into the exact sources of QAnon's strange ideas as we analyze a thinly disguised QAnon recruitment video called Out of Shadows (a "documentary" that has received more than eighteen million views since its debut in April), no doubt one of the most impactful propaganda films of 2020.

Click HERE to read "Making Sense of QAnon: What Lies Behind the Conspiracy Theory That's Eating America?"
Posted by Robert Guffey at 10:13 AM No comments:

Donald Trump Saved Me from Being Eaten By Underground Demons! (Part 2)

SALON has just published Chapter Two of my multipart exposé about the off-the-deep-end, pro-Trump phenomenon known as "QAnon." Curious about the obscure origins of this weird new religion? If you want to know where the QAnon architects are getting their lunatic ideas, click HERE and THRILL to the quasi-pornographic debauchery of such predatory beasties as the subterranean Dero (courtesy of science fiction writer Richard S. Shaver)! SEE a woman shapeshift into a crocodile and play the piano (courtesy of infamous hoaxer Leo Taxil)! REVEL in the demonic Curse of Baphomet (courtesy of evangelical Christian cartoonist Jack T. Chick)! From 1940s pulp science fiction to 19th-century anti-Masonic propaganda, the true inspirations for Operation QAnon are beginning to be exposed in "The Deep, Twisted Roots of QAnon." 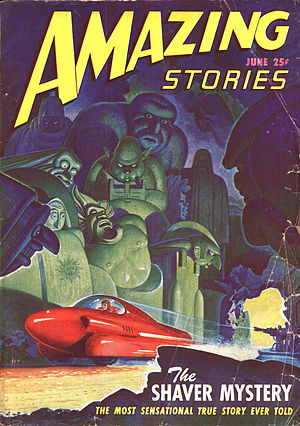 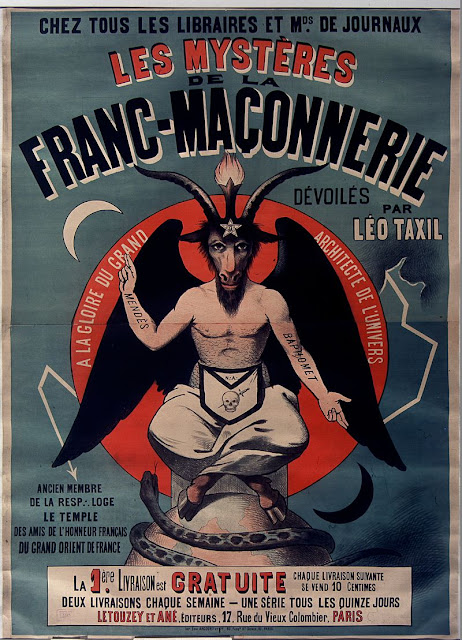 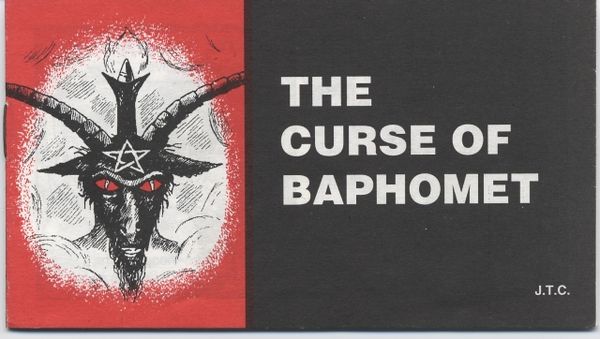 Posted by Robert Guffey at 9:13 AM No comments:

From Sarah Scoles' 8-4-20 OneZero article entitled "How Do We Know If a Virus Is Bioengineered?":
Almost as soon as the coronavirus appeared in the news, so too did speculation that it was purposefully engineered, the result of experimentation at one of several Wuhan laboratories. The idea that the virus, whether natural or engineered, came from a scientific facility was pushed by some politicians. The White House reportedly pressured spy agencies to look into lab links.
Most scientists agree, based on the virus’s genetics, that it probably hopped from animals to humans. On April 30, the U.S. Office of the Director of National Intelligence declared, on behalf of the 17 different organizations that make up the U.S. intelligence community, that “the Covid-19 virus was not manmade or genetically modified.” The organizations decided to continue investigating two alternatives: the more likely explanation that the virus jumped from an animal to a human, and the more remote possibility that it was a natural virus released in a lab accident, which still hasn’t been ruled out.
So, the U.S.’s spy sector “concurs with the wide scientific consensus,” as the statement put it, that the virus wasn’t created by people. But how did its people come to that conclusion? While the full scope of its investigation isn’t known, one program within the intelligence community, FELIX, did specifically investigate the hypothesis. FELIX’s analysis revealed that the virus hadn’t been engineered using “foreign” genetic sequences, indicating that SARS-CoV-2, the virus that causes Covid-19, was not man-made or engineered using pieces of other organisms.
But detecting “bioengineering” is a fraught task for any organism. Just as there are many ways to determine whether a virus was engineered, there are many ways to engineer a virus, leading to a constant tug of war — and a lot of uncertainty.
FELIX stands for Finding Engineering-Linked Indicators, and it’s run by IARPA, the Intelligence Advanced Research Projects Activity. IARPA does high-risk research and develops next-next-gen technology under the Office of the Director of National Intelligence. In 2018, FELIX began funding six external teams to develop tools that can detect the fingerprints of bioengineering. These genetic signs are clear indications that someone messed around with an organism’s genome....


To read Scoles' entire article, click HERE.
Posted by Robert Guffey at 1:33 AM No comments:

Donald Trump Saved Me from Being Eaten By Underground Demons!

SALON has just unleashed Chapter One of my epic, multipart exposé about the Highly Weird, alt-right phenomenon known as "QAnon." Click HERE to read "What Is QAnon?: A Not-so-brief Introduction to the Conspiracy Theory That's Eating America."
Posted by Robert Guffey at 9:23 AM No comments:


China’s government has a history of using major historical events to introduce and embed surveillance measures. In the run-up to the 2008 Olympics in Beijing, Chinese security services achieved a new level of control over the country’s internet. During China’s coronavirus outbreak, Xi’s government leaned hard on private companies in possession of sensitive personal data. Any emergency data-sharing arrangements made behind closed doors during the pandemic could become permanent.
China already has hundreds of millions of surveillance cameras in place. Xi’s government hopes to soon achieve full video coverage of key public areas. Much of the footage collected by China’s cameras is parsed by algorithms for security threats of one kind or another. In the near future, every person who enters a public space could be identified, instantly, by AI matching them to an ocean of personal data, including their every text communication, and their body’s one-of-a-kind protein-construction schema. In time, algorithms will be able to string together data points from a broad range of sources—travel records, friends and associates, reading habits, purchases—to predict political resistance before it happens. China’s government could soon achieve an unprecedented political stranglehold on more than 1 billion people.
Early in the coronavirus outbreak, China’s citizens were subjected to a form of risk scoring. An algorithm assigned people a color code—green, yellow, or red—that determined their ability to take transit or enter buildings in China’s megacities. In a sophisticated digital system of social control, codes like these could be used to score a person’s perceived political pliancy as well.


A crude version of such a system is already in operation in China’s northwestern territory of Xinjiang, where more than 1 million Muslim Uighurs have been imprisoned, the largest internment of an ethnic-religious minority since the fall of the Third Reich. Once Xi perfects this system in Xinjiang, no technological limitations will prevent him from extending AI surveillance across China. He could also export it beyond the country’s borders, entrenching the power of a whole generation of autocrats.
China has recently embarked on a number of ambitious infrastructure projects abroad—megacity construction, high-speed rail networks, not to mention the country’s much-vaunted Belt and Road Initiative. But these won’t reshape history like China’s digital infrastructure, which could shift the balance of power between the individual and the state worldwide [...].
Despite China’s considerable strides, industry analysts expect America to retain its current AI lead for another decade at least. But this is cold comfort: China is already developing powerful new surveillance tools, and exporting them to dozens of the world’s actual and would-be autocracies. Over the next few years, those technologies will be refined and integrated into all-encompassing surveillance systems that dictators can plug and play.
To read Andersen's entire article, click HERE.
Posted by Robert Guffey at 6:33 PM No comments:

What follows is from Mark Evanier's 8-3-20 NEWS FROM ME blog post:
As if we didn't have enough sad news coming at us these days, we've just heard that Susan Ellison, widow of Harlan Ellison, passed away in her sleep last night. We lost Harlan in June of 2018… and now this.
Read Evanier's entire post HERE.
From Neil Gaiman's 8-5-20 blog post entitled "Susan Ellison--RIP AND LOVE":
I met Harlan Ellison the day before his wife, Susan, met him, in 1985, in Glasgow. I interviewed him. I didn't get to meet Susan until 1989, when I went to see Harlan in LA. She and I became friends incredibly fast. She was the most direct person I knew. Our first actual conversation, while Harlan was answering a phone, began with her saying, "So. I know you're a writer. I don't know anything else about you. Gay or straight? Married or unmarried? Children or no children? Who are you?" and so I told her everything I could think of, and I kept answering her questions for the next 31 years.
Read Gaiman's entire post HERE.
From J. Michael Straczynski's 8-3-20 Facebook post:

Ellison Wonderland is now quieter than before: the vast, high-ceilinged office where Harlan did his writing, the pool table beneath Stadium-level speakers, the secret rooms that once helped hide Vietnam war objectors on the run to Canada, the toys and the meticulously painted figurines, and the room that was built just to hold all the mugs he had collected…the stacks of awards and manuscripts and tens of thousands (yes you read that number right) of books carefully and lovingly maintained and read and honored.

And now they are gone.

And I have no words that will tell you what that really, truly means. 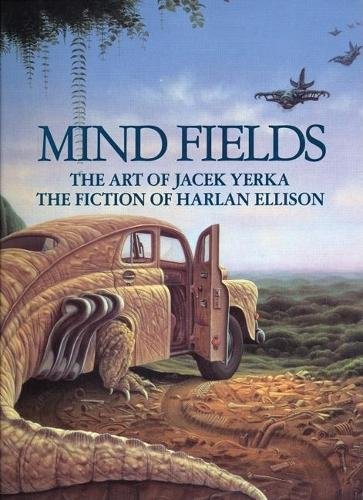