William S. Burroughs and the Dead-End Horror of the Centipede God

Here's a recent article by Mark Dery (courtesy of BoingBoing) that's well worth your time.  Entitled "William S. Burroughs and the Dead-End Horror of the Centipede God," this article argues that Burroughs's perpetual obsession with centipedes is a strange metaphor for the gradual dissolution of freedom of thought and the complete annihilation of human liberty.  Here are the first two paragraphs of Dery's article:

In the annals of centipede phobia, William S. Burroughs stands alone. The man loathed the beasts, loathed them with a loathing that would not die. Had he lived to see Web videos of pet centipedes with pinkies (hairless baby mice) in their death grip—a thriving subgenre, on YouTube, of what might be called predator porn—Burroughs would surely have emptied his beloved .38 (a snub-nosed Smith & Wesson, which he slept with every night) into his computer.
In Burroughs’s novels, centipedes are the emissaries of a Venusian fascism, a mind-controlling horror so virulently opposed to free thought, racial tolerance, gay rights, and other mile-markers of human progress—in fact, so hostile to mammals in general and Homo sapiens in specific—that they are literally from another planet. Like the aliens in Invasion of the Body Snatchers, Jack Finney’s bad dream about the loss of individualism (whether to suburban conformity or communist infiltrators, we’re never quite sure), Burroughs’s centipedes don’t just want to knock us off our perch as evolution’s crowning achievement; they want to parasitize us, puppeteer us.
To read Dery's entire article, click HERE.

Back in 2006 I wrote my own article about William Burroughs for New Dawn Magazine, analyzing Burroughs' fiction from the perspective of Gnostic mythology.  This article later became Chapter 13 of my first book, Cryptoscatology: Conspiracy Theory as Art Form.  Reading both pieces back to back would no doubt reveal illuminating connections between the two articles with regard to Burroughs's view of what he called "The Reality Studio" and its labyrinthine system of control.  To read my WSB article, "William S. Burroughs:  20th Century Gnostic Visionary," click HERE. 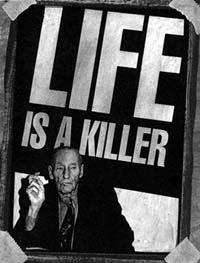 Posted by Robert Guffey at 3:09 PM No comments:

From Greg Ross' blog, FUTILITY CLOSET, comes this fascinating history lesson about a U.S. psychological warfare plot intended to be employed against the Japanese during WWII:


"In 1943, seeking to use psychological warfare to prevail in its efforts against the Japanese, the U.S. Office of Strategic Services hit on a strange plan. Noting that Shintoists might view the image of an illuminated fox as a harbinger of bad times, the agency’s experts suggested that 'under extremely trying conditions' the Japanese 'would be adversely affected by what they might consider an evil omen' and succumb to 'fear, terror, and despair.'
"How does one make a glowing fox? Planners started by experimenting with fox-shaped balloons covered in luminous paint and dangled by fishing line, but by the end of 1944 they’d shelved that idea and begun spraying live foxes with luminous paint, hoping to release them across the 'entire field of combat,' calling this America’s 'most potent' psychological tool against the Japanese."
To read Ross' entire article, click HERE.
(When you read the rest of this piece, note that this particular psychological warfare plan was tested first on Americans, a tried-and-true tradition that continues to this day with other--even more outrageous--psychological warfare operations.)

Posted by Robert Guffey at 11:48 AM No comments:

My first book of fiction, SPIES AND SAUCERS (a collection of three interrelated novellas), is now available for pre-order from PS Publishing in   Here's the dust jacket ballyhoo:

Madness, murder and mayhem abound in SPIES & SAUCERS, a collection of three sui generis novellas by ROBERT GUFFEY.  Each of these tales explores the anti-Communist hysteria of the 1950s, as well as the flying saucer obsession of that era, while straddling the boundaries of seemingly disparate genres:  metaphysical science fiction, espionage, satire, and crime noir.

The first part of SPIES & SAUCERS, “The Fallen Nun,” takes place in 1959.  Our protagonist, Kyle Black, wakes up one morning to discover a dead nun lying facedown in the marijuana garden in his backyard.  Attempting to solve the mystery of how the nun ended up in his garden leads Kyle to strange encounters with an Irish Cyclops named Finn mac Cumhall, a Devil Bat grown to enormous proportions by a dead mad scientist, two homicidal tabloid journalists, and a sickly extraterrestrial abducted by a time travelling mother superior…

In “, ,” a young FBI agent named Philip Trowbridge is sent to  in 1955 with orders to infiltrate a small town, reportedly a hotbed of underground Communist activity, in which several previous FBI agents have disappeared without a trace…

“Spies and Saucers” is set three years earlier in 1952 and involves a blacklisted, left-wing  screenwriter named Curt Adamson.  Down on his luck after having been dumped by every studio on the West Coast, Adamson is recruited by a covert spy agency to write a screenplay for an unknown reason—unknown only to Adamson, that is.  Adamson’s superiors are well aware of the screenplay’s purpose.  Though consistently told he doesn’t have a “need to know,” Adamson insists on discovering the truth behind the tale he himself is weaving, and uncovers a plot far more outlandish and ominous than the cheap horror and science fiction B-movies on which he’s built his tarnished reputation…

If you wish to pre-order a copy of SPIES AND SAUCERS, simply click HERE.


NOTE:  My short story “Selections from The Expectant Mother Disinformation Handbook” is still available from PS Publishing in the latest issue of POSTSCRIPTS (#30/31), which also contains scintillating tales by RAMSEY CAMPBELL, JACK DANN & BARRY MALZBERG, FORREST AGUIRRE, MIKE RESNICK, DARRELL SCHWEITZER and many others.  I'm told there are only a few copies of this issue left, so if you wish to order POSTSCRIPTS #30/31, I urge you to click HERE before they're all gone... forever! Posted by Robert Guffey at 8:00 PM No comments: