The first reviews are coming in.  I was very pleased to receive this endorsement from Dr. Alan Cantwell (who influenced my research very early on):
"A sane and penetrating analysis into the murky realm of contemporary conspiracy theory.  Guffey is sure to inform and entertain you with Cryptoscatology."
— Alan Cantwell, M.D., author of AIDS & the Doctors of Death.
Cantwell's book, AIDS & the Doctors of Death, was one of the first guideposts leading me down this strange and wonderful path of questioning consensus reality at every turn.  You can learn more about Dr. Cantwell and his work here.
Posted by Robert Guffey at 4:13 PM No comments:

A recent (and delightfully cheery) article from rt.com:


After 9/11, the United States government created the Department of Homeland Security to prevent future acts of terrorism and deal with other domestic issues. Now in order to keep doing such, the agency is asking for 450 million hollow point bullets.
The DHS has signed off on an "indefinite delivery" from defense contractors ATK that will include, for some reason, nearly 500 million high-power ammunition for .40 caliber firearms. The department has yet to discuss why they are ordering such a massive bevy of bullets for an agency that has limited need domestically for doing harm, but they say they expect to continue receiving shipments from the manufacturer for the next five years, during which they plan to blow through enough ammunition to execute more people than there are in the entire United States....
Read the rest of the article here
*****
The following Letter to the Editor from TimesReporter.com (posted on 5/4/12) offers an intriguing viewpoint on the above article:
De-industrializing of this once-great country, with free trade and shipping of jobs overseas, contributes to more national debt plus a trade deficit which is mathematically impossible to pay.
This race war now looming is being instigated to divide the American people, funded and fueled by this government.
An order of 450 million rounds of 40-caliber ammunition has been made by Homeland Security, now infiltrated by Muslim brotherhood.
A biological warfare facility located one mile off New York’s east coast is now being or has been moved to Manhattan, Kan., right in the middle of our heartland and what is called tornado alley. Diseases have escaped from the facility such as Lyme disease and others, but because the wind blows west to east, most of these biological weapons getting loose don’t affect the United States. But now with this move to Kansas, what do you think will happen to our food supply when something gets loose?
Professor Bill Kaufman has testified before Congress on how the University of Michigan is teaching all of our technology, missile guidance, rocket reentry, everything to the Chinese and even to Chinese military, and we the taxpayers are subsidizing this education.
Do you actually believe that these Republicrats care about you in this country?
FRED BORY, DOVER

Posted by Robert Guffey at 11:00 PM No comments:

For those of you who've read Chapter 22 of Cryptoscatology ("Collaborating With the Dead"), you might find this recent L.A. Times news story a tad intriguing.  Titled "Missing FBI Agent Armed and Suicidal, Police Believe," the article offers a suggestive parallel to the Steve Semon story related at the end of Cryptoscatology.  I wonder what specific case this "national security" specialist was working on when he suddenly went missing....
Posted by Robert Guffey at 10:20 PM No comments: 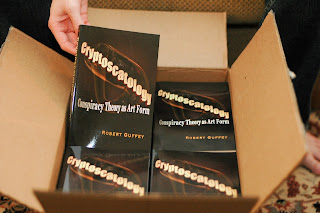 Yes, Cryptoscatology: Conspiracy Theory as Art Form is now available!  Right now the book can be ordered through TrineDay's website, and pretty soon it will be available through Amazon as well.  If you're off the grid, and choose to avoid Amazon, within the next few weeks you will also be able to walk into a Barnes & Noble--and other brick and mortar stores (those that are still in existence, at least)--and buy a copy off the bookshelf.
Posted by Robert Guffey at 10:08 PM 1 comment: