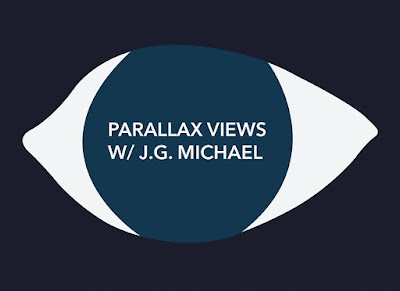 Several weeks ago, J.G. Michael interviewed me at great length about the legacy of Harlan Ellison for his excellent podcast, PARALLAX VIEWS. My segment concludes Michael's special two-part examination of Ellison and his work.

You can listen to the entire show by clicking HERE (I enter the scene around the 52:00 mark, following an interview with Emmy Award-winning talk show host John Barbour). 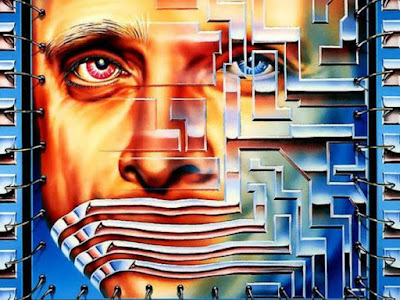 Posted by Robert Guffey at 10:23 PM No comments:

RETURN TO THE HOLLOW EARTH

As you can see below, the White Rabbit and I have been blown away by Rudy Rucker's new novel, RETURN TO THE HOLLOW EARTH.  My floppy-eared friend and I give Rucker's latest effort in speculative dadaism thirty-three out of five stars!  To discover more information about Rucker's numerous excellent novels, visit the author's website HERE. 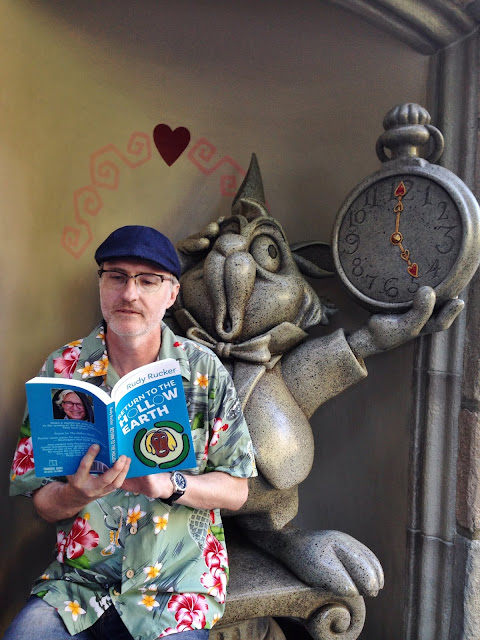 Down a maelstrom with Poe--
to the woomo at the Hollow Earth's core....

Suppose Earth is hollow, like a tennis ball. And you're weightless in there! The wondrous Hollow Earth holds jungles, seas, native tribes, flying pigs, killer nautiluses, giant ants, and live flying saucers. Godlike sea cucumbers at the Hollow Earth's core illuminate the great spherical space with branching rays of pink light.
Over twenty years ago I wrote a steampunk novel called The Hollow Earth. And now I'm publishing Return to the Hollow Earth, along with a 3rd edition of The Hollow Earth—lightly revised so that Eddie Poe is able to return for the sequel!
In The Hollow Earth, our young narrator Mason Reynolds leaves his farm, befriends the dissolute Edgar Allan Poe, and falls through a thousand-mile hole in the ice of Antarctica. Astounding adventures in the Hollow Earth ensue. Mason finds Seela, the love of his life. Mason, Seela and Poe make their way back to surface. And then they encounter Poe’s double...
Return to the Hollow Earth is also in the steampunk mode. Starging in Gold Rush San Francisco, Mason and his pregnant wife Seela embark on a return voyage to the Hollow Earth with Edgar Allan Poe, traversing a great maelstrom at the North Pole. The god-like sea cucumbers at the Earth’s core have a startling plan. When Mason and Seela return to the Earth’s surface, they’re in Santa Cruz, California—in the year 2018...
Posted by Robert Guffey at 6:33 PM No comments:

The big infusion of cash that sent Mark Zuckerberg and his fledgling college enterprise on their way came from Accel Partners, in 2004.

Jim Breyer, head of Accel, attached a $13 million rocket to Facebook, and nothing has ever been the same.

Earlier that same year, a man named Gilman Louie joined the board of the National Venture Capital Association of America (NVCA). The chairman of NVCA? Jim Breyer. Gilman Louie happened to be the first CEO of the important CIA start-up, In-Q-Tel.

In-Q-Tel was founded in 1999, with the express purpose of funding companies that could develop technology the CIA would use to “gather data.”

That’s not the only connection between Jim Breyer and the CIA’s man, Gilman Louie. In 2004, Louie went to work for BBN Technologies, headed up by Breyer. Dr. Anita Jones also joined BBN at that time. Jones had worked for In-Q-Tel and was an adviser to DARPA, the Pentagon’s technology department that helped develop the Internet.

With these CIA/DARPA connections, it’s no surprise that Jim Breyer’s jackpot investment in Facebook is not part of the popular mythology of Mark Zuckerberg. Better to omit it. Who could fail to realize that Facebook, with its endless stream of personal data, and its tracking capability, is an ideal CIA asset?

To read the rest of Rappoport's post, click HERE.
Posted by Robert Guffey at 1:18 PM No comments:

Yes, it only took two whole years for the New York Times to reach this brilliant deduction...


During the Cold War, Washington feared that Moscow was seeking to turn microwave radiation into covert weapons of mind control.
More recently, the American military itself sought to develop microwave arms that could invisibly beam painfully loud booms and even spoken words into people’s heads. The aims were to disable attackers and wage psychological warfare.
Now, doctors and scientists say such unconventional weapons may have caused the baffling symptoms and ailments that, starting in late 2016, hit more than three dozen American diplomats and family members in Cuba and China. The Cuban incidents resulted in a diplomatic rupture between Havana and Washington.