Of Popes and Presidents (and/or Cabbages and Kings)


‘The time has come,’ the Walrus said,
‘To talk of many things:
Of shoes—and ships—and sealing-wax—
Of cabbages—and kings—
And why the sea is boiling hot—
And whether pigs have wings.’
--Lewis Carroll, Through the Looking-Glass, 1872

It’s a universal truth that no Pope or President abandons his position of extreme privilege unless someone far more powerful orders him to leave.  This was true of Richard Nixon in 1974, and it’s no doubt true of Pope Benedict XVI in 2013.  It’s a simple dictum of the corporate mentality (and as Benito Mussolini once said, “Fascism is corporatism”):  When the Guy At The Top becomes Bad For Business, he’s gotta GO.  This is as true in the White House as it is in the Mafia or the Vatican.  In August of 1974 President Nixon got the hint and resigned under great pressure from what historian Roger Morris once described as “a formidable national security party, civilian and uniformed, Republican and Democrat, that governs when it chooses, whenever it believes it must” (Colodny and Gettlin xxiii-xxiv).  Journalists Lee Colodny and Robert Gettlin detail this high-stakes political struggle in their 1992 book, Silent Coup:  The Removal of a President.

Some political assassinations don’t require bullets to the brain, and the Nixon “assassination” is a perfect example of this.  When a potential target refuses to “get the hint,” however, sometimes bullets--or equally fatal alternatives--become necessary.  This was true of President John F. Kennedy on November 22, 1963 and it was also true of Pope John Paul I on September 28, 1978.

In June of 1984 an intrepid journalist named David A. Yallop published an incendiary book about Pope John Paul’s suspicious death entitled In God’s Name:  An Investigation into the Murder of Pope John Paul I.  Here’s a brief excerpt from the Prologue:

"On September 28, 1978, while Pope John Paul I sat down to a frugal dinner in the third-floor dining room of the Apostolic Palace within Vatican City, other men in other places were deeply anxious about the activities of the newly elected pope....

"At his desk, Cardinal Jean Villot, Vatican Secretary of State, studied the list of appointments, resignations, transfers, that the pope had handed him one hour previously.  In Villot's mind there could be no doubt that there was to be a dramatic change....

"In Buenos Aires, banker Roberto Calvi consulted his protector, Licio Gelli, the formidable head of the secret organization, P2.  Calvi had been beset by problems even before the election of John Paul 1.  Now he faced total ruin....

"In New York, Sicilian banker Michele Sindona was fighting extradition to Italy.  If John Paul I continued to dig into the web of corruption at the Vatican Bank, the trail would lead back to Michele Sindona....

"In Chicago, Cardinal John Cody received a phone call from Rome:  the pope had decided that Cardinal Cody was to be replaced....

"On September 28, 1978 these six men—Marcinkus, Villot, Calvi, Gelli, Sindona, Cody—had a great deal to fear if the papacy of John Paul I continued.  One of these six men applied the Italian Solution:  The pope must die!"

‘I, uh, weep for you.  I (hic) oh excuse me
I deeply sympathize
For I've enjoyed your company, oh much more
Than you realize.’
‘Little Oysters? Little Oysters?’

But answer, there came none
And this was scarcely odd because
They'd been eaten
Every one!

With cabbages and kings!
The End!

* * *
The true story behind the “assassination” of the wilted piece of compromised cabbage known as Pope Benedict XVI has yet to be unveiled, but if it ever is we’ll no doubt have a true investigative journalist like David A. Yallop to thank for the revelation.  The End! 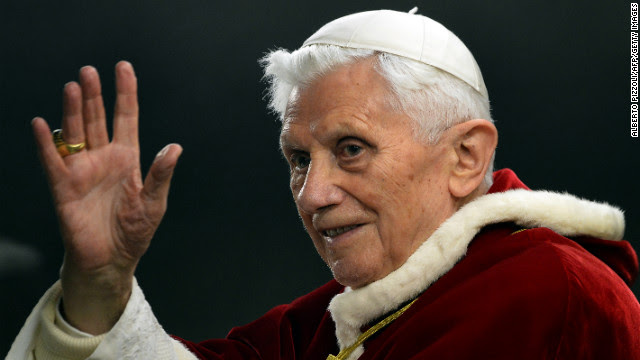 Posted by Robert Guffey at 2:22 PM