As you've probably already seen on the news, the biggest wild fire in California history is now raging its way across the smoke-plagued landscape a few miles north of Long Beach (where I currently dwell).  Frequent Cryptoscatology correspondent Chris Doyle sent me a photograph he took of the burgeoning fire along with the observation that when the smoke starts to look like Cthulhu, Bad Times are imminent.  H.P. Lovecraft would no doubt agree.

I've included Mr. Doyle's photo below.  And yes, as you can clearly see, the smoke cloud does indeed look like the squamous, eldritch face of Cthulhu himself (or herself)! 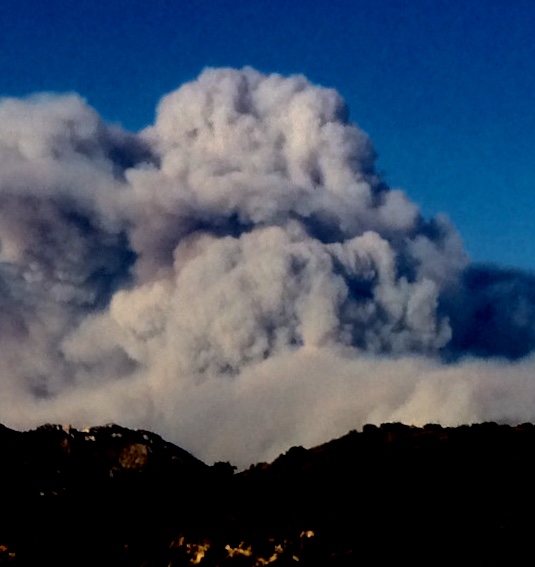 My colleague Rafael Zepeda (author of such excellent books as HORSE MEDICINE, TAO DRIVER, and DESPERADOS) tells me the image bears a far closer resemblance to the Aztec god Mixcoatl, or perhaps even Itztalcoliuhquil-Ixquimilli.  "Hard to beat those bloody Aztecs," as Zepeda says.  Who am I to disagree?

By the way, Mr. Doyle also reports that some of the more conspiracy-minded residents of Topanga Canyon insist that the fires were caused by energy weapons as part of a land grab for the high speed rail system... and/or that the fires began at the little-known but nefarious Rocketdyne/Area 4/Santa Susana nuclear test facility and that "the AEC and/or NASA made sure all communications were cut off in the Canyon for some malign purpose."  For more information regarding the Santa Susana nuclear test facility, click HERE (VIDEO STARTS PLAYING AT 0:50 SECONDS).