What follow are a few excerpts from Jean Guerrero's 10-25-18 Wired Magazine article entitled "My Father Says He's a 'Targeted Individual.'  Maybe We All Are."  Not surprisingly, the article is a missed opportunity for the most part; however, Ms. Guerrero does manage to eke out a few relevant passages here and there.  Note that the place and time of the government harassment alleged by Ms. Guerrero's father occurred in San Diego in the early 2000s, the same place and time as the harassment experienced by my friend Dion Fuller whose trials are described in great detail in my 2015 nonfiction book CHAMELEO:  A STRANGE BUT TRUE STORY OF INVISIBLE SPIES, HEROIN ADDICTION, AND HOMELAND SECURITY (available for purchase from OR Books right HERE).  If Ms. Guerrero wants to know what most likely occurred to her father (and what is probably still occurring to him), she should get her hands on a copy of CHAMELEO as soon as possible. 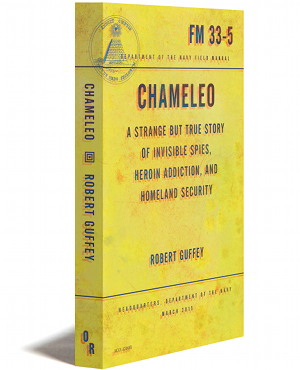 In Chapter 19 of CHAMELEO you will find an interview I conducted with a scientist named Richard Schowengerdt, whose optical-camouflage technology was stolen by the U.S. military many years ago and is now being used to torture thousands of innocent civilians all across the country.  Back in 2006, the year in which my conversation with Schowengerdt took place, I submitted a shortened version of this revelatory interview to none other than Wired Magazine.  The editors of that august publication never responded to my query.  Now, twelve years later, Wired chooses to publish this neutered "think-piece" on the same topic which skirts around the most pressing issues related to the unconstitutional harassment of United States citizens (an ongoing--and growing--problem).

You can hear me discuss the illegal harassment of U.S. citizens at great length in any number of recent interviews archived on my YouTube Channel, which can be accessed HERE.

As promised, here are a few of the least tone-deaf excerpts from Ms. Guerrero's tepid effort....


"[O]n my 20th birthday, I made a trip to my paternal grandmother’s house, and my father, sober now for several years, dragged a chair next to me and started talking. It was the first lengthy conversation we’d had since I was a child.
"The story he told sounded unlikely: that he was one of thousands of 'targeted individuals,' who had been covertly spied on and manipulated by the CIA in the early 2000s. (So-called TIs have begun banding together around the country and across the internet.) But he didn’t sound agitated or disturbed the way I had imagined a paranoid schizophrenic might. He was articulate. He cited patents, research, and the central role of something he called MKUltra, a real CIA mind-control program that ran from 1953 to 1973 that targeted drug addicts, prisoners, and other vulnerable people.
"I didn’t know anything about the pile of facts he’d just left at my feet—his far-fetched answer to the mystery of his breakdown and disappearance—but I felt it was my duty, as a journalist and as his daughter, to investigate the possibility that what he said was true. I hoped I could do it without falling down a rabbit hole [...].
"MY FATHER BELIEVES the CIA subjected him to remotely induced electric shocks, filling him with lightning-bolt pain when he tried to smoke crack. He explained that a copper penny he placed on his forehead during one of the attacks flew off him as if zapped by a corporeal current. Whenever he touched a metal railing, the pain dissipated.
"Technology capable of inducing something like the TIs’ 'electric shocks' does exist: The Active Denial System is a military weapon using millimeter wave radio frequency to zap people. California resident Donald Friedman repeatedly sued the government for allegedly harassing him with such weapons. One of his Freedom of Information Act requests resulted in the declassification of a 1998 US Army document that discusses a microwave technology capable of beaming sounds into heads from hundreds of meters away. With some refinement, the document states, the technology could induce 'voices within one’s head.'
"My father recently described the frustration of trying to convince a psychologist he wasn’t crazy: 'There was a TV playing over there in the room, and I said 'Do you hear that TV? Well, I hear it too. But that doesn’t mean I’m ‘hearing voices.’ There’s a technology in which they can make you remotely hear voices, and it has been documented. You can read about it.'
"The fact that you can read about these technologies does not prove his theories. But when I sit with my uncertainty, rather than dismiss my father’s beliefs outright, my eyes open to the covert manipulation that is commonplace in our lives. We carry it around in our pockets. We wear it on our wrists. We devote more than 10.5 hours a day to screen time.
"Facebook has conducted experiments on us that show how susceptible we are to mind control. In 2012, the company secretly tampered with the news feeds of nearly 700,000 people, manipulating the ratio of emotionally positive to emotionally negative posts, then monitoring the subsequent activity of those users.
"What they found is that emotions can be remotely controlled and are highly contagious on the platform. People who saw more unhappy posts showed more unhappy activity and vice versa. Many questioned the experiment’s legality and ethics, wondering if Facebook had triggered any suicides. Facebook apologized for the way the experiments were conducted and promised to conduct them 'differently' in the future, with enhanced review.
"We ignore the parallels between those experiments and the ones the TIs describe at our own peril. We are amphibians in a pot of water over a flame.
"MKULTRA IS NOW seeing a resurgence in the popular culture through Netflix shows like Wormwood, a docudrama based on Eric Olson’s real-life quest to uncover the facts about his father’s death during MKUltra. The name of the series is an allusion to a line in the Bible in which the star Wormwood falls from the sky and turns waters of the Earth bitter. Olson describes finding no relief because nobody has been held accountable.
"Given this lack of closure for families like his, is it really that crazy for thousands of people to believe the US is still illegally experimenting on people—especially after Edward Snowden’s leaks showing NSA surveillance of the general population? Don’t their beliefs reveal something meaningful about our failure to acknowledge the extent of our wrongs and the reach of our technologies?
"We have become commodities manipulated by shadowy forces beyond our control: corporations, computer algorithms, campaigns. We are caught in a web where we can be easily drained of blood."
To read Ms. Guerrero's article in its entirety, click HERE.