From CBC in Canada comes the news of Stanton Friedman's death. Here's a brief excerpt:


Stanton Friedman, the famed UFO researcher based in Fredericton, has died.
Friedman was returning from a speaking engagement in Columbus, Ohio, when he died suddenly at the Toronto Pearson Airport on Monday night, according to his family.
He was 84.
A nuclear physicist by training, Friedman had devoted his life to researching and investigating UFOs since the late 1960s.
He was credited with bringing the 1947 Roswell Incident — the famous incident that gave rise to theories about UFOs and a U.S. military coverup — back into the mainstream conversation.
Friedman "officially" retired last year but still booked speaking engagements "because he loved talking about UFOs," said his daughter, Melissa Friedman, who works for CBC News.
"Dad was curious about anything he didn't know about. He was always asking questions about how things worked.
"I think it's rare for someone to stay so engaged and curious and open-minded for a life that's that long."
She remembered her father as encouraging, proud and caring and said she was fortunate to have one last visit a week ago in Nova Scotia.
Friedman was an accomplished writer, publishing dozens of papers about UFOs and writing or co-writing several books. Three of those books were written in tandem with Kathleen Marden.
To read the entire CBC article, click HERE.

Of Stanton Friedman's numerous books about UFOs, I particularly recommend the very credible and well-researched CRASH AT CORONA (co-authored with Don Berliner), which was released by Paragon House in 1992. 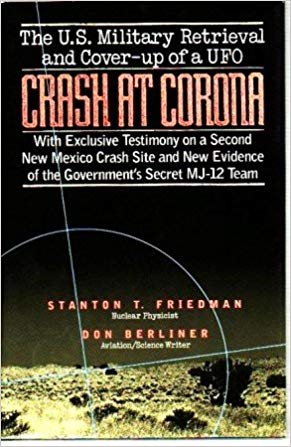 If you're interested in reading Loren Coleman's obituary for Friedman at his Twilight Language blog, click HERE.
Posted by Robert Guffey at 6:44 PM