Apotheosis of the Self: Matthew Levi Stevens’ THE MAGICAL UNIVERSE OF WILLIAM S. BURROUGHS 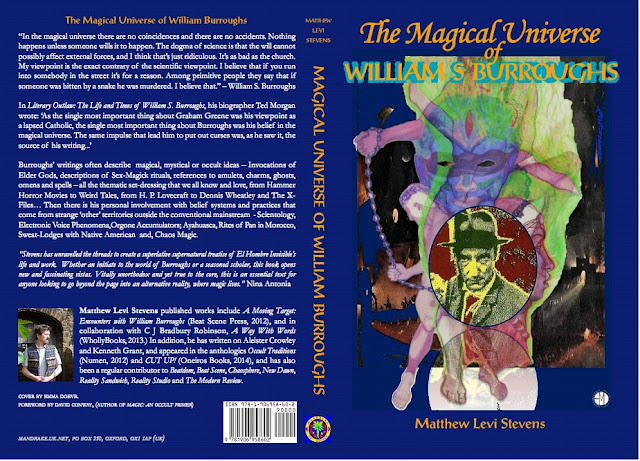 When the reputation of a literary figure extends far beyond his words, there’s always the danger of the legend eclipsing the literature itself.  Of course, this eclipsing process has occurred with any number of cult writers.  Hunter S. Thompson, Charles Bukowski, Jack Kerouac, and William S. Burroughs are prime examples.  Sometimes, one gets the impression that the number of Burroughs books sold every year far outnumber the amount of Burroughs books read.  When articles are written about Burroughs in the popular press, they generally focus on facile aspects of his personal life (e.g., his drug addiction, his sexuality, the accidental murder of his wife, etc.).  The complex themes Burroughs explored throughout his oeuvre are very rarely discussed.

Here are only a few of the heady concepts one can find woven throughout Burroughs’ work, from Junky in 1953 all the way to My Education in 1995:  the struggle between libertarianism and control, the undeniable fact that civilization has enslaved itself to a psychological “algebra of need” (a phrase employed by Burroughs in his most famous work, Naked Lunch) far more addictive and destructive than illegal drugs, and a consistently Gnostic view of the hypostatic world.  For the most part, these ideas have been ignored even by those who consider themselves to be Burroughs mavens.

In his recent study, The Magical Universe of William S. Burroughs, Matthew Levi Stevens offers us a book-length examination of Burroughs’ obsession—arguably a positive obsession—with “magical thinking.”  Stevens unveils the hidden reality underlying the opaque prose found in Burroughs’ most seminal works such as The Soft Machine (1961), The Ticket That Exploded (1962), Nova Express (1964), The Wild Boys (1971), Cities of the Red Night (1981), The Place of Dead Roads (1984), and The Western Lands (1987).  By focusing on the hermetic notions that lay at the heart of Burroughs’ darkly humorous brand of phantasmagoria, Stevens adds valuable insights to our understanding of one of the twentieth century’s most controversial and misunderstood storytellers.

Stevens provides a comprehensive view of Burroughs’ unique writing methods, magical practices that tapped into (what Burroughs called) his “unknown and so unpredictable” creativity, and successfully demonstrates that Burroughs “sought to exploit the ability of the brain to perceive apparent connections or resemblances between things which, rationally speaking, are not linked” (as Stevens writes at the end of Chapter 9, “The Lost Boys”).  This type of “magical thinking” was the key to unlocking many of the innovations Burroughs unleashed on the too-often benign world of American literature from the 1950s onward.

Tellingly, David Conway (author of the bestselling nonfiction book, Magic:  An Occult Primer) writes in the chapter entitled “The ‘Priest’ They Called Him”:  “[Burroughs] was not first and foremost a ‘magician,’ any more than I am, but a human being for whom magic (among other techniques) might lead not just to enlightenment but to a glorious (and liberating) apotheosis of the self.”  By documenting the precise magical techniques Burroughs used to develop the ideas behind his groundbreaking novels, Stevens has succeeded in uncovering more than just a few missing links in Burroughs scholarship.

Those interested in cutting to the core of Burroughs’ secret self, and perhaps even their own untapped potentialities, should not hesitate to plunge into The Magical Universe of William S. Burroughs.