The Muppets on Flight 11

To commemorate Barack Obama's final Independence Day while serving as President of the United States, I present to you an important missive I recently mailed to the White House....


It's been awhile since I last wrote to you, so I thought it was about time I sent you a brief update.  Everything's just swell here in Los Angeles.  My pitch meeting is tomorrow at 11:00 A.M. at Jim Henson Studios over on 1416 North La Brea Avenue, not far from Grauman's Chinese Theatre and the El Capitan.  It's a charming little lot filled with bungalows that resemble an antiquated alpine village.  There's a giant, tuxedoed Kermit the Frog standing on top of the main gate, forever tipping his top hat to the passersby.  It's all quite charming.

Tomorrow I'm meeting with the Executive Vice President of the studio to propose an idea for the next Muppet movie.  Here's the title (I think you and your kids will love it):  The Muppets on Flight 11.

Fade in:  On the morning of September 11, 2001, the Muppets climb aboard American Airlines Flight 11 because they're heading to Los Angeles for an important gig at the Hollywood Bowl.  The whole gang is there.  They're all happy and singing.  It seems like the beginning of another bright and beautiful morning.  Suddenly… chaos ensues!  Five Muslim terrorists hijack the plane and take over the cockpit.  The Muppets, of course, come to the rescue.  Fozzie Bear drops Gonzo into a cannon, lights the fuse, and sends the masochistic Muppet hurtling into the solar plexus of one of the terrorist-fiends.  A second Arab whips out a box cutter and threatens Kermit the Frog.  Miss Piggy, understandably pissed off, screams, "Hiiiiiiiiii-yah!" and slams a Prada high heeled shoe right into the terrorist's nuts.  The box cutter goes flying out of the iniquitous towelhead's fist and crashes into a window with such tremendous force that massive cracks form in the plexiglass.  The window breaks and the cabin begins to depressurize.  Beaker is sucked out of the arms of his beloved mentor, Dr. Bunsen Honeydew, and gets stuck in the open window, inadvertently staving off the depressurization.  We see a close-up of Beeker's head sticking out the window, the force of the wind causing the antron fleece skin on his face to pull back from his soft teeth, his drawbridge mouth opening wide, his crazy eyes bulging out of their sockets as he screams, "Mee-mee-meeeeeeee!" 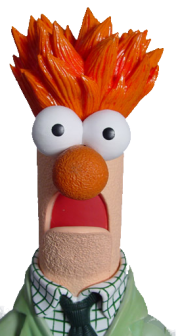 Several musical numbers will punctuate this feature-length film, which amounts to a two-hour-long fight scene so perfectly orchestrated that it's comparable to a ballet.  You'll be pleased to learn that Samuel Jackson and Liam Neeson are also passengers on this flight.  At one point Neeson erupts from his seat, dropping a martini onto the plush carpet in First Class, and yells, "Release the Kraken!"  Giant, stop-motion, Ray-Harryhausen-manufactured tentacles emerge from the clouds, wrap around the plane, and try to tear it to shreds until Dr. Honeydew shoots the mythological beast with an experimental laser beam that reduces the tentacles to smoking stumps.  What's left of the tentacles retreats into the clouds and the flight continues. 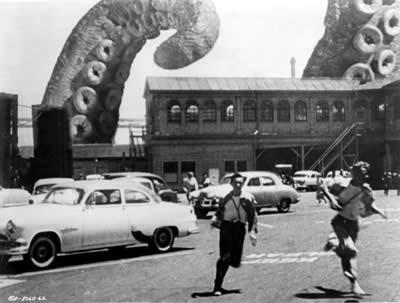 Now we cut back to the interior of Flight 11:  Having combined their considerable strengths, the Muppets have succeeded in turning the box cutters back on three of their assailants, leaving a bloody, Arabic mess in the aisle of the plane.  We see the five members of the Muppet house band (i.e., Dr. Teeth and the Electric Mayhem) burst into the cockpit and proceed to engage in a rousing bout of fisticuffs with the two godless heathens who are now piloting the airliner.  As the ruthless al-Qaeda acolytes do their best to slice the throats of Dr. Teeth, Janice, Floyd Pepper and Zoot, Animal is able to leap into the pilot's seat and get his furry orange paws on the controls.  "AN-I-MAL… AN-I-MAL!" screams the primitive beast, now over-stimulated with adrenaline, slamming his hairy fists into the array of blinking lights laid out before him on the control panel.  Just as the other members of Dr. Teeth and the Electric Mayhem succeed in subduing the terrorists, Animal releases a bloodcurdling shriek ("AN-I-MAL… AN-I-MAL!") and aims the plane directly into the North Tower of the World Trade Center, thus destroying all the passengers on board, including almost every Muppet in existence.

Are you still with me, Mr. President?  Flash forward to September 14:  We begin with an aerial view of the blackened, skeletal rubble that was once the most magnificent skyscraper in the world.  We hear the sounds of President George W. Bush delivering to the firefighters of New York an inspirational, stirring speech through a bullhorn.  The President is commemorating the bravery of all the victims who were lost on that dark day.  Suddenly, a raspy voice rings out from the crowd:  "I can't HEAR you!"  The camera closes in on The President.  At first he looks confused, then grins and replies, "Ah, but I can hear you!  In fact, the rest of the world hears you!  And the terrorists who knocked these buildings down… will hear all of us soon!"  Rising above the cheers can be heard the phlegmatic laughter of two senior citizens; the camera swings around to reveal Statler and Waldorf, the pair of irate old men who often jeered their fellow Muppets during the live broadcasts of The Muppet Show, sitting on a nearby lamppost as they hurl vicious invectives at the President.  (Note:  Statler and Waldorf were the only Muppets who survived the destruction of Flight 11 because they ended up getting packed in a piece of luggage that was accidentally rerouted to Boston's Logan Airport.)  Statler:  "Eh?  What's that?  The terrorists who knocked these buildings down?  You jackball!  Don't you know that your own cabinet engineered the hijacking?  Donald Rumsfeld and Dick Cheney knew about the plot months ago and refused to do anything about it in order to kickstart a decade-long war in the Middle East that would be lucrative to American weapons manufacturers!"  Waldorf:  "Wha—?  Are you sayin' the President of the United States is a puppet?"  Statler:  "Now hold on there, my friend!  Let's not give the poor fellow more credit than he deserves!"  Both Muppets laugh in tandem at this comment, but their hearty cackles are cut off abruptly by the sound of gunfire.  Metal-piercing bullets blow white stuffing out of the backs of Statler and Waldorf's octogenarian heads, thus silencing the colorful critiques of Statler and Waldorf forever.  Dubya's eagle-eyed secret service agents have picked off both hecklers with quick and clean kill shots—not unlike the ones that will eliminate Osama bin Laden from the planet eleven years hence.  Dubya continues his rousing speech, not missing a beat, the bullhorn seeming to grow louder and louder until all that's audible is a promise of righteous vengeance against those who have wronged the United States followed by an unintelligible roar from the teeming masses gathered at Ground Zero.

Of course, the key to this plot is the simple but beautiful fact that the presence of the Muppets does not change the outcome of this drama whatsoever.  We think, at first, that the Muppets are going to save the day… but no.  The tragedy turns out the same exact way—whether the Muppets are there or not.  The only difference is that we can now add thirty-eight of America's most beloved entertainers to the necrology, resulting in a final casualty list of 3,034.


Well, I better go to sleep now.  I'm sure you have a lot to do tomorrow as well.  I'll let you know how the meeting goes as soon as possible.  I can't wait to see the awed expression on the EVP's face when I pitch this billion-dollar-idea to him tomorrow.  Wish me luck, old friend!  Until next time, I remain…