"Dick Gregory, a pioneering force of comedy in the 1960s who parlayed his career as a stand-up into a life of social and political activism, has died Saturday of heart failure, his rep confirmed to The Hollywood Reporter. He was 84.

"'It is with enormous sadness that the Gregory family confirms that their father, comedic legend and civil rights activist Mr. Dick Gregory departed this earth tonight in Washington, D.C.,' his son, Christian Gregory said via a statement from his father's rep. 'The family appreciates the outpouring of support and love and respectfully asks for their privacy as they grieve during this very difficult time.'

"'He was one of the sweetest, smartest, most loving people one could ever know,' his publicist of 50 years, Steve Jaffe, tells THR. 'I just hope that God is ready for some outrageously funny times.' A full statement and details of Gregory's funeral will be released Sunday, Jaffe said.

"According to an Aug. 17 statement written by his son, Gregory was recently hospitalized.

"Regarded as the first African-American comic to perform regularly in front of white audiences, Gregory appeared on all of the top TV talk shows of the 1960s and '70s [...].

"Gregory used his newfound fame to become a civil rights activist and opponent of the Vietnam War. He made friends with Martin Luther King Jr. and Malcolm X; honored a request from Medgar Evers to speak at a voter registration rally in Jackson, Miss.; delivered food to NAACP offices in the South; marched in Selma, Ala.; got shot while trying to keep the peace during the 1965 Watts riots; was arrested in Washington for protesting Vietnam; performed benefit shows for the Congress of Racial Equality; and traveled to Tehran in 1980 to attempt to negotiate the hostages' release.

"Gregory ran for mayor of Chicago in 1967 but lost to Richard Daley, then entered the race for U.S. president a year later. A write-in candidate on the Peace and Freedom Party ticket, he received some 47,000 votes [...].

"Gregory began his professional career as a comedian in Chicago in 1958, serving as a nightclub emcee at the black-owned Herman Roberts Show Bar while he maintained a day job at the U.S. Post Office.

"After his life-altering shows at the Playboy Club, Gregory wrote a profound 1964 autobiography titled Nigger, which described his impoverished childhood and the racism he experienced. He wrote a note in the foreword: 'Dear Momma, wherever you are, if ever you hear the word "nigger" again, remember they are advertising my book.'

"He then played an alto saxophonist named Richie 'Eagle' Stokes in Sweet Love, Bitter (1967), a story loosely based on the life of Charlie 'Bird' Parker.

"In 1973, Gregory stopped performing in clubs because smoking and drinking were allowed (his activism surely cost him work), and it would be more than two decades before he returned to the stage. Until recently, he was doing more than 200 shows and lectures a year [...]."

Also, I urge you to click on the links to various illuminating Dick Gregory interviews I posted back on May 1, 2016.  To check out those interviews, click HERE.

Recommended reading:  Murder in Memphis:  The FBI and the Assassination of Martin Luther King by Mark Lane and Dick Gregory. 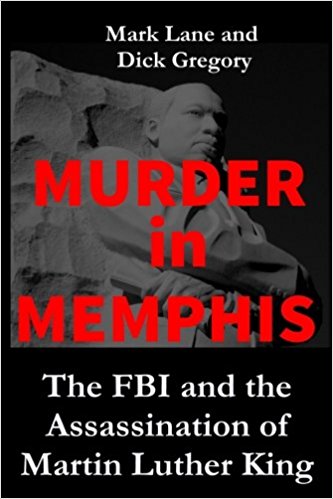 Posted by Robert Guffey at 9:22 PM