"Moloch the incomprehensible prison!  Moloch the crossbone soulless jailhouse and Congress of sorrows!  Moloch whose buildings are judgment!  Moloch the vast stone of war!  Moloch the stunned governments!

As you've no doubt noticed, a number of articles have been published recently regarding the forced removal of certain controversial statues all across the United States.  Most of these statues are located in the South, but some can be found further west as well (see, for example, this article regarding the Hollywood Forever Cemetery).  Reporter Arthur I. Cyr wrote a fairly objective overview of this subject in a recent edition of the Chicago Tribune (click HERE to see that article).  Please do note, however, that there's one particular statue no one in the media has bothered to attack, either physically or politically.... 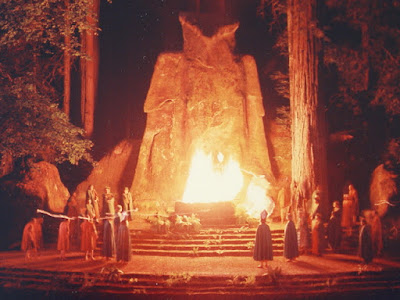 (If you don't recognize the above structure, simply click HERE to find out more about it.)