Back in April my editor at Night Shade/Skyhorse asked me if I would provide a blurb for Leslie Peter Wulff's debut novel, Uncle Brucker the Rat Killer.  He assured me the novel would be right up my alley.  Since it was the beginning of midterms at CSU Long Beach, where I teach five English classes, I didn't think I'd have time to read an entire novel, but I decided to take the impractical path instead and dive into the manuscript anyway.  I was so glad I did.

As I said on the cover of the book, I knew this novel was going to be a winner as soon as I started reading it.  What really clinched it was this line on p. 7:  "...a family of rats living in a public library can learn to read an abridged dictionary."  The book is filled with absurd statements like this one, what appear to be scholarly facts about the secret lives of rats, all of which seem haunted by the magic realist imaginations of Jorge Luis Borges and Italo Calvino, but spiced with a homespun American twang.

The reader learns incredible revelations about rats from such fanciful texts as the Specialized Rat Encyclopedia, From A to Z.  For example, did you know that there are 487 words in the rat vocabulary, that rat cakes can turn humans into interdimensional vermin, that rats originate from a place called Rat Land located in a universe somewhere next door to ours?

What is the central plot of Uncle Brucker the Rat Killer?  Our sympathetic teenage hero, Walt (whose uncle is the titular character), lays it all out early on in this passage on pp. 55-56:

"After the Second Uprising [a savage war between rats and humans that occurred several years before the story begins] we pushed the rats back and they've been laying low since then.  For six long years the rats have been gearing up, preparing, building the bridges and digging the tunnels that match up one dimension to the next.

"Now they were gathering at the other side of the Portal.

"A million rat army, waiting for the go code....

"But where was the Portal?  Where were the rats coming through?

"Uncle Brucker was determined to locate that damn Portal and find out for himself.  But it wouldn't be easy.  All he had to do was what the entire US Army and all its Generals could not accomplish."

Wulff's novel layers one absurdity upon another, but always with a straight face, almost as if he were channeling the dry stand-up humor of comedian Steven Wright.

The protracted scenes near the end of the novel, in which an amnesiac Uncle Brucker is lost in Rat Land, have a whimsical yet deadly serious quality about them that reminds me of the best work of William Kotzwinkle (Dr. Rat, Hot Jazz Trio, etc.) and Richard Brautigan (In Watermelon Sugar, Sombrero Fallout, etc.).

The folkloric qualities of R.A. Lafferty's classic tales (found in such collections as Nine Hundred Grandmothers) are evoked near the end of the novel when Uncle Brucker seeks the help of the President of the United States against the oncoming rat hordes (from pp.183-84):

"Like all elevators in the White House, it doesn't go straight up and down, it zigzags from floor to floor for security reasons.  Uncle Brucker watched a spectacular display of lights and arrows on the control panel, and he thought of what he wanted to tell the President.

"The President answered three calls on his cell phone.  Each time he apologized to my Uncle with a we'll-talk-later wave of his hand.  They zigzagged past a swimming pool and the bowling alley, and they stopped at a floor with no number that few people know about.

"The Boss is an unsmiling white-haired woman of few words who took charge of the floors beneath the white house.  In a military uniform of no particular rank or service, she greeted them at the elevator.  Other than the 9mm automatic and the Master Key, she carried two flashlights on her belt, one marked Boss and the other marked Emergency President.  She had worked in the White House for ages and everyone called her Boss.

"At the end of the hall, the Boss unlocked the door to a special room.  Inside, shelves and shelves of shoes left behind by the Presidents throughout the years.

"'Find a pair that fits,' said the President.  'The Boss will sign them over.  It's my way of saying thanks.'"

Though Wulff's style can be favorably compared to the disparate fabulists I've cited above, the fact is that this novel feels completely original and ultimately stands on its own as a unique, postmodern fable for our peculiar age filled with uncertainty, nonsense, paranoia, and occasional acts of unexpected kindness.

So, please, I urge you to find the Dimensional Portal nearest you, if you can, and plunge headlong into the topsy-turvy world of Rat Land with Uncle Brucker the Rat Killer as your steadfast guide.

Leslie Peter Wulff's Uncle Brucker the Rat Killer was published by Night Shade/Skyhorse on July 11, 2017, and can be purchased through Amazon by clicking HERE. 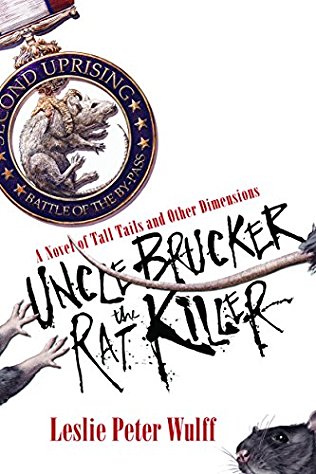 Posted by Robert Guffey at 4:50 PM