"[Ishmael Reed's] 10 novels are, for the most part, subtle satires on race, worked into settings such as the OJ Simpson trials, a US civil war in which photocopiers exist and a wild west where cowboys wield laser guns. But Mumbo Jumbo is the most dazzling of them all. Set ostensibly in the 1920s, Reed’s novel follows conspiracy theories ranging backwards and forwards through time. A 'plague' called Jes Grew has spread from New Orleans and caused half the country to dance recklessly, enjoy jazz and have a new appreciation for African American culture. Religious orders like the Knights Templar and the hi-tech Wallflower Order (responsible in Reed’s novel for the Depression and the US occupation of Haiti) seek to destroy an ancient Egyptian text that the Jes Grew may 'want'.

"But Jes Grew is 'an anti-plague', the spirit of innovation and freedom of self-expression itself: 'Jazz. Blues. The new thang … Your style.' Reed took a snatch of the preface to 1922’s The Book of American Negro Poetry, in which James Weldon Johnson says 'the earliest Ragtime songs, like Topsy, "jes" grew' – they just happened – and turned it into a clever literary device that exposes people’s prejudice.

"While some believe the media invented Jes Grew to sell papers, Harlem Voodoo priest Papa LaBas is drawn into the search for its ancient text. Unbeknown to him, a Muslim scholar has already found it, translated it and had it rejected by a publishing house. The slip is found next to his dead body: 'The "Negro Awakening" fad seems to have reached its peak and once more people are returning to serious writing … A Negro editor here said it lacked "soul" and wasn’t "Nation" enough.'

"Made up of newspaper cuttings and party invites, handwritten notes and footnotes, contemporaneous and contemporary photographs, Mumbo Jumbo gives one a sense of Reed just using everything that captures his own imagination. This is exhilarating because, like jazz, the novel feels improvisatory and ambitious. Reed embraces ridiculousness, while lending the ridiculous weight. It is a funny book about conspiracy theories that nonetheless feels serious and true, encompassing potted histories of Voodun loas and the Crusades, essays on Christ’s laughter and the cotton trade ('Was it some unusual thrill at seeing the black hands come in contact with the white crop?'), and a postmodern alternative creation myth involving Osiris, Incas, Homer and Moses."

To read the rest of McAloon's article, click HERE. 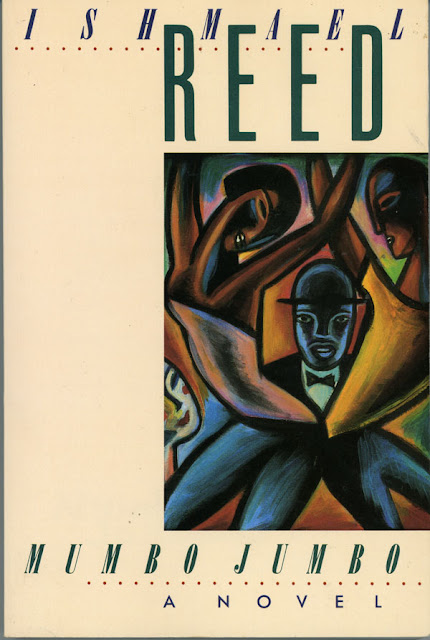 Posted by Robert Guffey at 6:33 PM