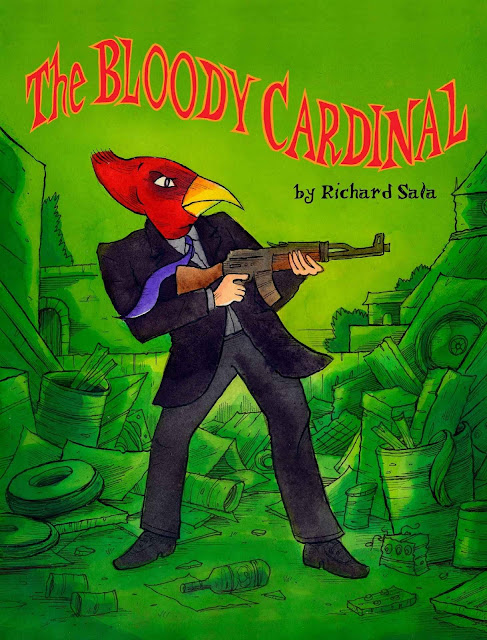 Richard Sala, an artist known for his surrealist style and prolific work in illustration and cartooning, has passed away at the age of 61. Sala's comics and artwork were held in high acclaim and published through multiple independent avenues.

Sala's publisher Fantagraphics posted the unfortunate news to its Facebook page today, along with a self-portrait by Sala. The post reads, "It is with great sadness that we share the news that our dear friend, the cartoonist Richard Sala, has passed away at the age of 61."

I wrote about Sala's excellent 2017 graphic novel, THE BLOODY CARDINAL, in a 12-3-17 Cryptoscatology post entitled "The Cryptoscatology Top Ten: The Best Comic Books of 2017!" On November 18, 2019, Richard Sala quoted from my review of THE BLOODY CARDINAL on his Facebook page. I was pleased to know to that he approved of my assessment of his book:

Note to my readers and to lovers of unusual comics in general: I hope to finish up my web serial THE BLOODY CARDINAL 2 by the end of the year (at the rate of a page or two (or 3) a week…. Psst! There's a new one coming tomorrow). Then sometime next year (??) the story will be one of four graphic novels in a hefty omnibus from Fantagraphics. -- So I have been glancing back over my shoulder at The Bloody Cardinal book which came out in 2017 -- and while doing so I discovered a very nice quote about it from a column on the 10 best comics of 2017 (on which it was included). Of course I am much too humble to repost it here…
Just kidding! -- how can I resist since the reviewer kindly name checks two of my paisanos!:
"Imagine Italo Calvino’s If On a Winter’s Night a Traveler (a playfully self-reflective novel in which a pair of obsessed readers explore the interdependence of art and reality) mixed with an Italian giallo slasher film directed by Mario Bava, throw in a man dressed like a big red bird and a cast of innocent young women in danger of being the homicidal fowl’s next victims, and you won’t even come close to the treasure trove of strangeness awaiting you in Richard Sala’s perversely humorous graphic novel, The Bloody Cardinal."
Grazie!